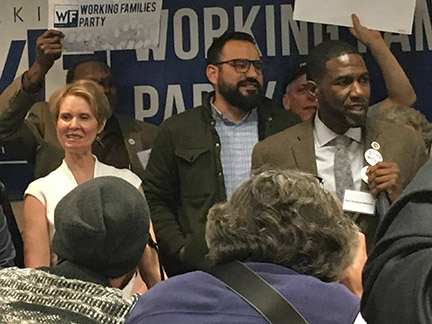 Yesterday, Saturday, April 14, The Working Family Party announced Cynthia Nixon and Councilman Jumaane Williams as their choices to run for Governor and Lt. Governor of New York State, this fall.
Some 200 supporters packed a room in the lower level of the Albany Hilton, located one block from the State Capital.
But with the media present, the roar of Nixon-Jumaane supporters, including the Brooklyn contingent with Our Time Press occasional contributor Skip Roseboro, will be heard
hroughout the nation.

Working Family Party Endorsed Cynthia Nixon for Governor
and Jumaane Williams for Lt. Governor
ALBANY, NY — In a show of massive grassroots power, the Working Families Party voted today to formally back Cynthia Nixon as their candidate for Governor of New York and New York City Councilman Jumaane Williams (45CD) for Lieutenant Governor. An overwhelming 91.5% of state committee members gathered in Albany voted to endorse Cynthia, a major blow to Governor Cuomo and a rejection of his divisive politics that threaten progressive policies and community groups.
In their endorsement, the WFP said, “We can’t wait to get to work and elect Jumaane Williams so we can have a state that puts working families first, not real estate billionaires and hedge-fund donors.”
“I am proud to have received the support of the New York Working Families Party today,” said Councilman Williams. “In a democracy where every voice matters, the Working Families Party fights for people from all walks of life from across our state.”
“I am honored to receive the endorsement of the Working Families Party and inspired by the enthusiasm of progressive working-class members of the party,” said Cynthia Nixon. “WFP activists and voters are the heart and soul of our movement to make New York a place that belongs to all of us– a place with great schools for every child, good jobs, health care for all, and an end to mass incarceration. I’ve been a supporter of the WFP for years. It’s the party that I’ve always looked to as the political home for progressives in New York State, and a source of grassroots muscle for the movement.”

In their released statement, the WFP said, “With chapters and thousands of active grassroots supporters in all corners of the state, sealing the endorsement of the Working Families Party will help bring a broad base of support to Cynthia’s campaign. After an extended campaign to pressure the party and state committee members to endorse him, on the eve of losing the vote to endorse, Andrew Cuomo withdrew his name from contention, pretending that he never cared about winning the WFP’s support in the first place. Cuomo’s own words and actions have shown that this is an endorsement he badly wanted to win. He is willing to do absolutely anything to win – except act like a real Democrat.

Following the committee meeting, hundreds of members of the Working Families Party welcomed her to accept the nomination to chants of “Sí se puede,” (yes you can) vowing to work alongside her to knock doors, organize and win the nomination. Showing stark contrast in excitement and momentum compared to her opponent, Cynthia happily accepted the nomination to a cheering crowd and spoke of her platform to fight economic, racial, and gender inequality all across New York:

“The WFP endorsement caps off a week of five consecutive progressive community organization endorsements, including New York Communities for Change (NYCC), Citizen Action of New York, Make the Road Action, and the New York Progressive Action Network (NYPAN), representing 30 chapters across the state. Today’s endorsement echoes growing discontent among the progressive community with centrist policies and backroom dealings in Albany that leave working-class and communities of color out in the cold.

“After the Working Families Party endorsed Cuomo four years ago, he went back on his promises, and his policies proved to exacerbate economic inequality and prioritize corporate donors over the needs of everyday New Yorkers. In the last 24 hours, Cuomo threatened the funding of the WFP and of community organizations who won’t endorse him, a hallmark of his political brand. In the coming months, Cynthia will work with the thousands of activists and members of WFP to grow a political movement to become New York’s first woman Governor.”