In the News …
Advertisement 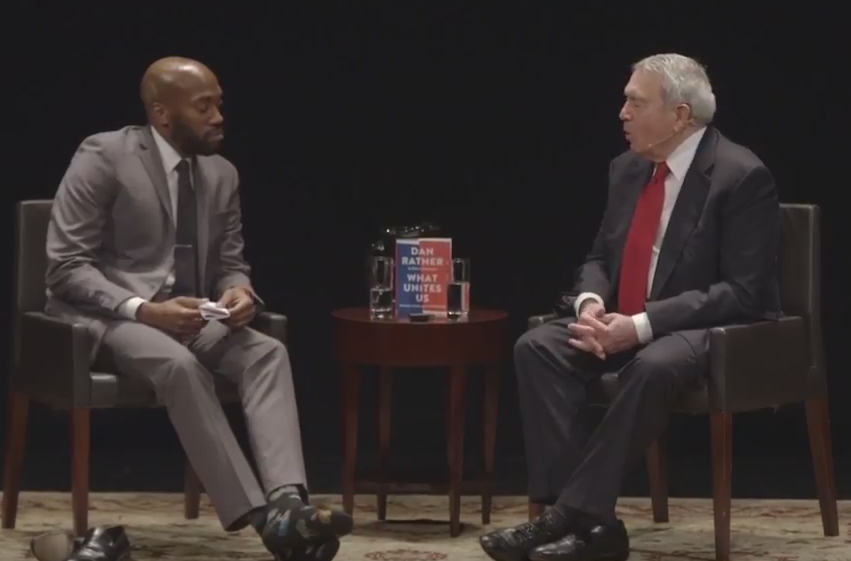 Emmy Award-winning journalist Dan Rather explores what it means to be American and the principles that define America in his new book What Unites Us: Reflections on Patriotism.

In a collection of essays, the journalist outlines the importance of the institutions that make up the country and explores the traditions that link all Americans.

Monday night, in a warm, lively conversation with NPR’s Sam Sanders, before a huge crowd at the Brooklyn Academy of Music, he also offered suggestions as to how we can move forward as a nation.

The veteran newsman, now president and CEO of News and Guts has covered every president since Dwight D. Eisenhower. So, it was fitting that Sanders would ask Rather to reveal the question he would most wants to ask President Donald Trump.

The former CBS News anchor said — as he did in a recent exclusive interview — with Time magazine, “Mr. President, what are you afraid of?” And the house roared.

In an August interview with MSNBC, Rather called it on what Trump fears. He said, “Donald Trump is afraid. He’s trying to exude power and strength. He’s afraid of something that Mueller and the prosecutors are going to find out.”

“A political hurricane is out there at sea for him,” he said to Politico earlier this summer. “We’ll call it Hurricane Vladimir if you will, the whole Russian thing. It’s still pretty far out at sea, but each day this political hurricane . . . is building in intensity.”

Reporter Sam Sanders is host of It’s Been a Minute with Sam Sanders at NPR.   Rather’s News and Guts independent production company specializes in high-quality nonfiction content across a range of distribution channels. (Notes from various media sources organized by Bernice Green)

What you should know about the NY constitutional convention vote