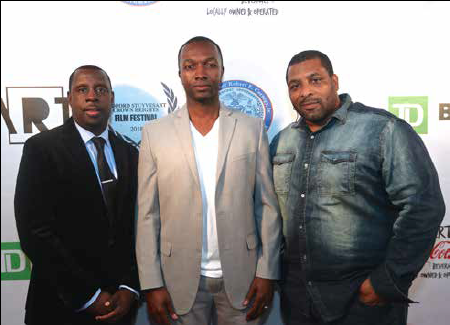 The Future of Fashion at the Navy Yard

Last weekend was a busy one in Central Brooklyn. Two special events, each produced and curated by lifelong members of the community, delivered shock waves of interest and excitement to the film and fashion industries.

Ripping the Runway at The Future of Fashion Event
at the Brooklyn Navy Yard.

Over the course of two days inside of the newly renovated Billie Holiday Theater, which is housed inside of Restoration, filmmaker Attika J. Torrence and the city’s first-ever Ambassador of Arts and Culture Joseph C. Grant, Jr. founded and produced the Bed-Stuy/Crown Heights Film Festival. Industry insiders, as well as actors and actresses from some of your favorite shows, converged upon our community’s landmark to present films and to discuss the industry. Speaking on the need for a festival such as this in Central Brooklyn, Attika says, “As artists and lifetime Bed-Stuy residents, we know the value of our neighborhood, community, art and culture. As film industry professionals and artists, we recognize the need for a community’s celebration of its arts, its culture and its artists. This is important because art or the lack thereof can be used to define a community and we need to be the curators of our art and of our community.”

Both of the festival founders were also presenters at the film festival. Joseph Grant was the Director of the Opening Night movie titled “The Stuff.” Attika presented a short movie titled “The Announcement.” Actors such as Jamie Hector from The Wire, Rob Morgan from Mudbound and Chyna Layne from She’s Gotta Have It lent their expertise and wisdom to the set of panel discussions which touched on everything from the business of film to the plight of the working actor. This festival makes perfect sense in this community because as Attika states, “Our community has been a hub for creativity, arts and culture for decades and that has not changed.”

While filmmakers were fellowshipping in Bed-Stuy, industry insiders in the fashion industry gathered together at Building 77 in the Brooklyn Navy Yard for The Future of Fashion, a daylong event designed to bridge the gap between iconic Brooklyn fashion labels, the fashion community in Brooklyn and emerging designers and fashionistas.

I served as Emcee for the Fashion Show. Here with
Kyiesha Kelly, Co-Founder of Hip Hop Closet

Building 77, a building that used to house a Navy storage warehouse and the Naval High Command for the North Atlantic Fleet, is now the hub of the Navy Yard’s redevelopment. The building has yet to fully open, but when it does it will house light manufacturing, food purveyors and retail space. As part of a reintroduction of the community to the Brooklyn Navy Yard, the Brooklyn Navy Yard Development Corp. gave the nod to longtime tenant and member of the Navy Yard’s Tenant Advisory Board Kyiesha Kelly to produce a fashion event for the community. Kyiesha is the co-founder of Hip-Hop Closet, an online retail clothing company that has maintained a fulfillment warehouse and office space inside of the Navy Yard since 1998. Kyiesha and her team pulled together an amazingly informative and entertaining event which included a panel discussion titled “Is Fashion REALLY Forward?” The panelists were a mix of high-level executives and small business owners, and the discussion focused on the future of marketing, how to retain your customer base and the best practices for up-and-coming fashion entrepreneurs.

After the panel discussion, the lobby of Building 77 hosted a full-blown New York Fashion Week-level fashion show. Hundreds of guests were on hand to watch iconic labels like Walker Wear and emerging future iconic labels like Haus of Swag reveal their cutting-edge catalogue of fashion. Hip-Hop Closet also put together a visually exciting walk, as did Future Saturdays, which is a group of children that meet in the Navy Yard on Saturdays. They created their own fashion looks and presented them on the runway. Other Navy Yard tenants, such as Crye, a company that produces fatigues, body armor and other combat apparel, and GCreate, a 3D printing company, both presented looks that heightened public interest. GCreate created 3D handbags and jewelry, no doubt previewing the future of fashion. The beauty of this event can be found in the event’s participants. Every staff person, vendor, makeup artist, stylist and model were from the Central Brooklyn community, proving the same exact adage that Attika Torrence was supporting across town, that being that arts and culture have been staples of this community for decades, and they continue to be.