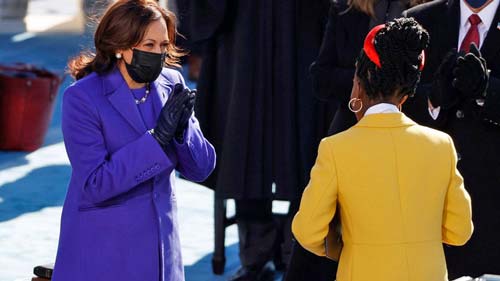 National Youth Poet Laureate  Amanda Gorman, the youngest poet ever to speak at a presidential inauguration, was applauded by Vice President Kamala Harris after delivering her poem, “The Hill We Climb” at yesterday’s  ceremonies on the West Front of the U.S. Capitol in Washington, D.C.
In her poem, Gorman described herself as “a skinny black girl descended from slaves and raised by a single mother [who] can dream of becoming president, only to find her self reciting for one”.
Her poem was completed on the day rioters stormed the Capitol.  She said in an interview with media that she wanted her poem to “speak to the moment” and “do this time justice.”
Only five poets have recited their work at presidential inaugurations in the past, including Maya Angelou and Robert Frost.
Civil Rights and Voting Rights activist Stacey Abrams said the poem —  featured in its entirety on page 12 —  was, “an inspiration to us all.”    Former presidential candidate Hillary Clinton tweeted that Gorman had promised to run for president in 2036 and added: “I for one can’t wait.”
Born in Los Angeles in 1998, Gorman had a speech impediment as a child – an affliction she shares with America’s new president. “It’s made me the performer that I am and the storyteller that I strive to be,” she said  i an interview with  the Los Angeles Times.  “When you have to teach yourself how to say sounds [and] be highly concerned about pronunciation, it gives you a certain awareness of sonics, of the auditory experience.”

“The Hill We Climb”

Joe Biden’s Inauguration Speech in Full: ‘We Will Write an American Story of Hope’