Gifts Ntozake Left for the World
… and Brooklyn
Advertisement 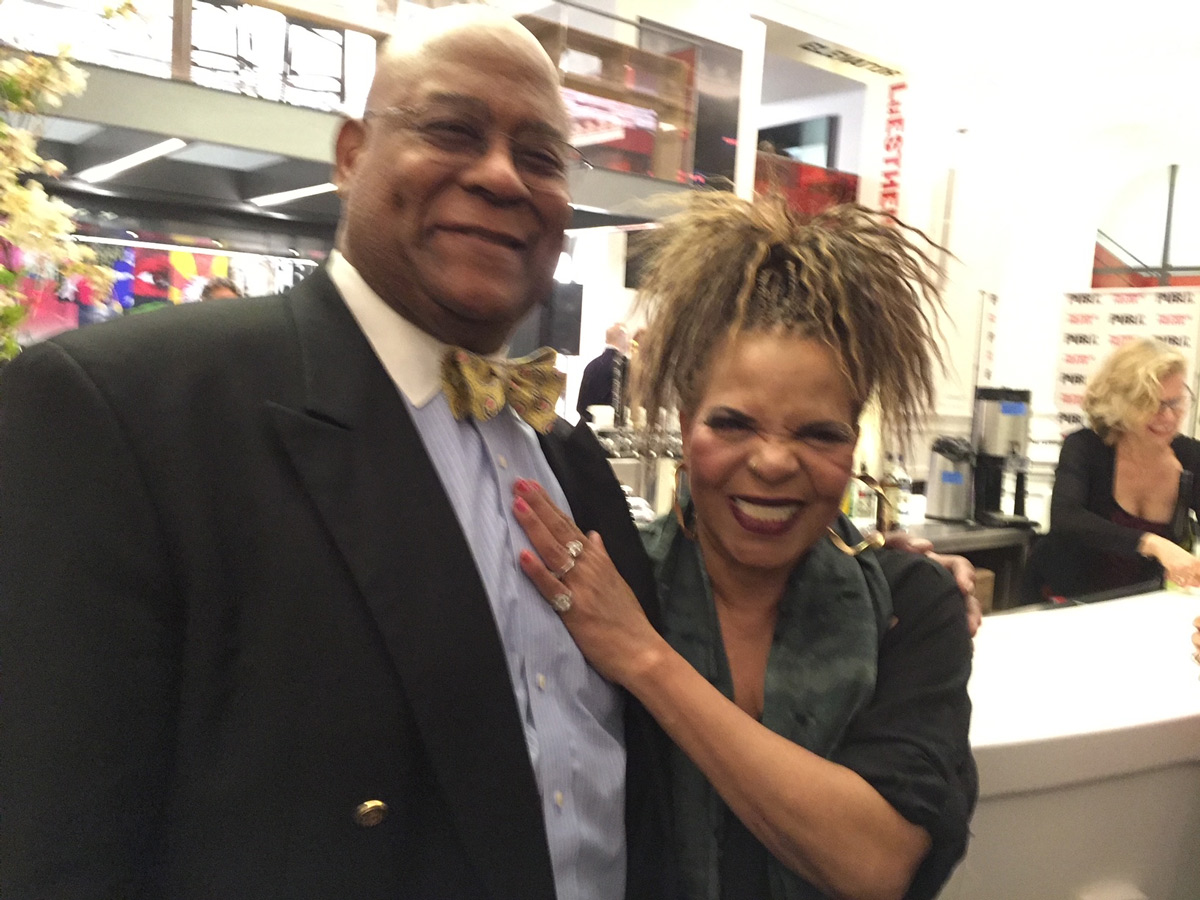 Legends: Ntozake Shange and Donald Sutton outside The Public Theatre in Manhattan, 2017.

By Bernice Elizabeth Green
Ntozake Shange’s for colored girls who have considered suicide/ when the Rainbow is Enuf is back on Broadway at the Booth Theatre, as of last night’s revival premiere.
The writer’s masterpiece earned considerable praise in reviews with its current cast under the direction of Tony-nominated choreographer-director Camille A. Brown … just as it did in its initial debut 46 years ago under the direction of the legendary Oz Scott.

One Shange celebrant who viewed the original production in its second successful year, 1977, was Donald Sutton, who some 20 years later would become Shange’s Literary Trustee.
Mr. Sutton is an internationally known arts administrator, fundraiser and strategic guide for numerous creative and performing artists (imagine having a clientele that includes The Voice of Mr. Ossie Davis). His work is away from the spotlight, off stage, behind the scenes and it is the reason we can see Ms. Shange’s work on Broadway for the next 20 weeks. And hopefully longer. As Literary Trustee, Mr. Sutton’s is responsible for directing our directing attention to Shange’s treasure trove, including 13 plays; 7 novels; six children’s books; and 19 poetry collections … “in addition to essays, correspondence and letters to editors,” Mr. Sutton informed us in a recent interview.

Friends accompanied Mr. Sutton the first time he attended the play. “We had a lively discussion afterwards on the great deal of controversy coming out about the negative reactions of Black men to For Colored Girls.

Sutton elaborated. “Not all Shange’s dramas, novels, and poetry relate the experiences of being a Black woman living in American Society and discordant racial, political, and feminist issues confronted constantly, including gender oppression, misogyny, sexism. But most of her work does.

“Ms. Shange focuses on the pain, yet many of her characters also find joy or possibility through self-discovery. Men now are more understanding or tolerant of Ntozake’s works today. Not the case so much 40 years ago.”

Mr. Sutton recalled that he and his friends saw “For Colored Girls…” as a “landmark” and “the next step in American drama. “Only a handful of American dramatists had accomplished a versed play, a play written almost entirely in poetry form. Eugene O’Neill? Maybe Arthur Miller? Just a few have been capable of writing entirely in verse.

Timeless strikes the truest chord to Mr. Sutton when it comes to describing Ntozake’s gifts, skills and talents. “Her vivid imagery and the rhythm of her work puts her right up there with the literary classics.”

Mr. Sutton immediately affirmed his statement by pulling from memory a passage from Colored Girls:

“Somebody/anybody
sing a black girl’s song
bring her out to know herself
to know you but
sing her rhythms” (followed by a line from another section)
“let her be born / let her be born / & handled warmly.”

He then compared Ntozake’s lines to the best to be found in one of the oldest works in Western literature. “The whole thing (For Colored Girls),” he said, “is like the Illiad. Consider this line in the Greek epic, ‘Sing a song of the valor of kings and the face that launched a thousand ships.’ That’s Homer… and Ntozake’s work is straight out of that tradition. But focused entirely on the experience of African American women.”

“I had heard from a very close friend of hers and mine,” he revealed, returning to the responses of Black men to For Colored Girls, “that Ntozake reacted very emotionally to the criticisms of her work by some, and even had regrets about (creating it). But there was nothing to regret about such a master work.”

Sutton asked men writers he knew a simple question: ‘Are you critical of ‘For Colored Girls …’? “I asked if they could honestly say that in their love lives, their sex lives, they had never been the actor in one of the situations described in ‘For Colored Girls’.

“No one was able to say, ‘No that never happened to me, I’ve never done anything like that. I never said that!’ I felt that the reactions to the question undergirded the truthfulness and honesty of what Ntozake had written. She was talking about life, black women’s lives and women’s lives in general. The truth hurts.”

There was another Truth that may have hurt Shange in a different way: Sutton informs that when the show opened on Broadway and sold out, it was playing to 6,000 people a week within a couple of months. “For Colored Girls was the highest grossing play of the Broadway 1975-1976 season and was nominated for a Tony for Best Play.

“When Equus won, I really felt Ntozake was robbed. For Colored Girls was the season’s box office leader, it didn’t seem right. That was 1977. Since then, the play has held the record as the longest-running play by an African American writer in Broadway history. A good deal has changed.”

Ntozake Shange attended Barnard College in New York and graduated with honors in 1970. She received an M.A. in American Studies in 1973 from the University of Southern California, Los Angeles. During college she went through a period of depression. But through words, she found an inner strength to carry on, becoming a writer, performer, and director.

As a college and university faculty member, she taught courses in women’s studies, creative writing, poetry and drama across the nation. She was a the recipient of many awards, including the 1992 Paul Robeson Achievement Award, the 1993 Living Legend Award from the National Black Theatre Festival, and the Pushcart Prize. for colored girls was nominated for Tony, Emmy, and Grammy Awards in 1977. It won the Outer Circle Critics Award as well as several Obie Awards.

In 2004 Shange suffered a stroke, which affected her ability to write. She passed in 2018.

Note to readers: An interview, announced for this week, with Ntozake Shange’s brother Paul Williams, Jr. will be featured during Our Time Press’ observance of June Men’s Month.