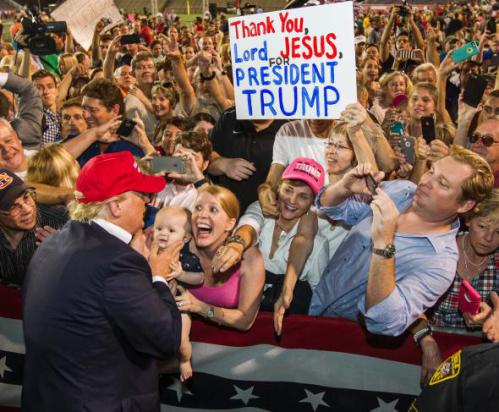 It was nauseating to witness Donald Trump, surrounded by grinning handkerchief-head Black quislings, read a tribute to Dr. Martin Luther King. The bumbling fashion in which he read the text made it clear that he was not familiar with the facts, nor was it coming from the heart.   Like so much about Trump, it came across as phony.   That was certainly how it struck Congressman John Lewis, who walked with Dr. King in the heat of the Civil Rights battle and was brutally beaten by racist redneck cops on the Edmund Pettis bridge during the voter registration drive in Lowndes County, Alabama.

When asked by reporter Katy Tur if he thought Trump’s remarks praising Dr. King was sincere, Congressman Lewis said no; pointing out that you cannot make racist statements one day and praise Dr. King’s legacy the next, yet he expects to be taken seriously.  He said that he will not attend the upcoming State of the Union Address because he does not consider Trump’s election to be legit, given the role played by Russian intelligence agencies in sabotaging Hillary Clinton’s campaign.

The racist statement Lewis was referencing was Trump’s declaration that the US should not welcome immigrants from “shithole” nations like Haiti and African countries.  Trump said he would prefer more immigrants from “Norway” instead.   There was no shame in mighty whitey’s game.  Aside from the fact that Trump’s comments about Haitians and Nigerians during a discussion of immigration policy in the Oval Office, exposed his abysmal ignorance about Black people once more, they also conjured up memories of some of the most racist episodes of the last century.

It is obvious that Trump knows nothing about the role played in the American War of Independence by Les Chasseurs Volontaires de Saint Domingue, ten companies of Haitian soldiers numbering 500 each who fought heroically in the Battle of Savanna during 1799.  They were repaid a few years later with racist American opposition to their own heroic revolution against their French oppressors, despite the fact the Haitian Revolution was based upon the same ideals as the US and French Revolutions: “Liberty, Brotherhood and equality.”  As CLR James says: “It was one of three great bourgeois revolutions of the 18th century” that helped shape the modern world.

Savanna Monument to Haitian Heroes of 1799

It is equally clear that Trump does not understand the contributions Nigerian immigrants are now making to the US.  As a community, Nigerian-Americans are model citizens.  They earn college degrees at a rate 10% higher than native-born Americans. According to the Houston Chronicle of January 12, “Nigerian immigrants have the highest levels of education in this city and the nation, surpassing whites and Asians, according to Census data bolstered by an analysis of 13 annual Houston-area surveys conducted by Rice University”.

These figures are reflected in the three Nigerians in my building: an international lawyer, a medical doctor and a mechanical engineer who has worked for Con-Edison, keeping the lights on in Trump Tower for the last 15 years.  I could cite many outstanding Nigerians contributing to the US in a variety of fields if I had the space.

Alas, none of this matters to Donald Trump because his concern is keeping America white and, given his choice of Norwegians as the ideal immigrant, the whiter the better!  In this attitude, Trump has taken us back 100 years to the ideas of another white New Yorker, Madison Grant.  A Columbia University graduate, Grant really did have the Ivy League education Trump bogusly brags about.  The President of the New York Zoological Society, and a leading voice in the racist Eugenics Movement – which advocated selective breeding to improve the human species – Grant published a 1917 book titled The Passing of the Great Race.

This book was written as a warning against the Superior Teutonic “race”, whose ideal prototype was the blue-eyed blond, represented in America by the “conquering Anglo-Saxon”, intermixing with the “lesser races”. And here Grant was talking about European “races”, such as Greeks and Italians, whom he labeled “men from failed civilizations”.

In Grant’s view, the ancient civilization of Greece and Rome was built by blond-haired Teutons, and it was their bad judgement in breeding with the darker races that brought on the decay and collapse of their civilization. There was a special warning against Jews.  Africans and other subhuman “colored races” were strictly off limits.

One way to prevent this dreaded intermixing with inferior racial stock was by controlling their presence in the American population through immigration policy.  However, Grant was elaborating on the ideas of another rich New Yorker, Teddy Roosevelt, who cultivated the role of Anglo-Saxon superman to the hilt; even buying a ranch in Wyoming where he was said to have led posses against outlaws in the late 19th century.

This image was enhanced after he led the “Rough Riders” in the Battle of San Juan Hill in Santiago, Cuba during the Spanish-American War.  Roosevelt felt that the paramount objective of reproductive practices was to prevent overly fertile “lesser breeds” from outbreeding the superior Anglo-Saxons.  He was quite open in his views on the superiority of Anglo-Saxons and felt that the decimation of American Indians and the conquest of the Philippines were acts of God.

These ideas would inform the passage of the racist National Origins Act of 1924, which set quotas on immigrants based on the countries from which they came.  The act provided that visas be issued to 2% of each ethnic group based on the 1890 Census, which would ensure that Anglo-Saxon’s would forever remain the majority.  One big fan of this law was Adolf Hitler, who praised it in “Mein Kempf”:

“There is today one state in which at least weak beginnings toward a better conception [of immigration] are noticeable. Of course, it is not our model German Republic, but [the US], in which an effort is made to consult reason, at least partially. By refusing immigrants on principle…by simply excluding certain races from naturalization.”

Hitler was also a big fan of Madison Grant’s “Passing of the Great Race”, from which he lifted his Teutonic master race theory.  We know this because historians have uncovered a letter Hitler wrote to Madison Grant in which the Nazi leader thanked him profusely and gushed: “Your book is my bible!”  It was these all-American ideas that informed and inspired the Nazi “racial hygienists” to exterminate six million of their Jewish countrymen by industrializing mass murder and launching a World War which resulted in 50 million deaths.

This is the tradition Donald Trump has so passionately embraced, a set of racist ideas that resulted in the enslavement of Africans and their descendants for 250 years, and the extermination of Indigenous Native Americans resulting in the greatest land theft in history!  Of course, Dumb Donnie Dimwit is too ignorant of history to know any of this – and based on his racist behavior many thoughtful observers believe it wouldn’t matter if he did – he is propagating these ideas nevertheless.

Ignorance is no excuse in any case.  After all, he ran for the presidency, he was not drafted. That he should attempt to associate himself with the prophetic legacy of Dr. Martin Luther King, an Apostle of Peace and Justice, with the aid of genuflecting Sambos, is beyond shameful: It is blasphemy!