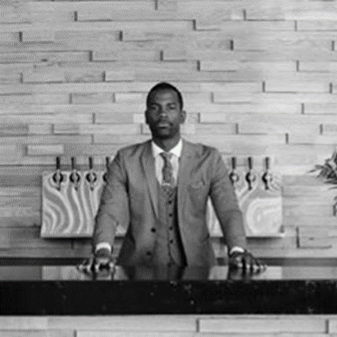 In the Capital Region

Cory Nelson’s Food Court in Troy, New York is something Brooklyn does not have and should.

But Nelson tells us when he returned to his Sast, New York home after graduating at Howard University, the neighborhood had changed and there was no room for him, not his entrepreneurial dream.

But Cory’s dream of opening an establishment with a dual purpose–to provide diners with a choice of good foods, and the people who create the food a site to incubate – is fully alive and well in New York State’s capital region, some 300 miles from his native BK.

Nelson, 28, studied computer science and chemistry at Howard. He first opened the businesses with some other ambitious Brooklyn-based colleagues.   Now a resident of Troy, he’s on his own and doing just fine from what we observed last Saturday.

It’s up in the air as to whether he will duplicate the same success in his hometown. After all, it’s getting more and more expensive to open a business here. But one thing’s for sure, Cory Nelson knows which side his bread is buttered when it comes to who or what to create for his success.

Nelson told Troy-based former Brooklyn resident Suzanne Spellen, a Brownstoner writer, “Whenever I have an issue, I think of East New York. Surviving and thriving there – that’s real toughness”.

He also commented in an interview with Ms. Spellen about his childhood: “I ran track five days a week. We went to the Intrepid and places like that, but there was no context made. Kids need a connection, it has to be more organic and relate to them somehow, or it just doesn’t mean much.”

“If I could do anything again in East New York, I would have realized that I wasn’t constrained by borders. The Financial District, any part of the city that you’re interested in – it’s only a subway ride away. But we are stopped by these artificial borders. We think those places are not for us – a mental blockade.”

“I never went to the Museum of Modern Art until I was an adult. It was there the whole time. I wish I could have explored all of New York City when I was younger and been more exposed much earlier and aware of what’s out there. Small things – small opportunities that could have opened up the doors to the world earlier.”

But at 28, Nelson, with two years of entrepreneurship success, is opening doors for businesses that will eventually branch out from his spot to a whole new world of their own. He also has established himself as a dynamic young role model for thousands of dreamers in Brooklyn and beyond.

For more information on Cory Nelson and the Troy Kitchen, visit