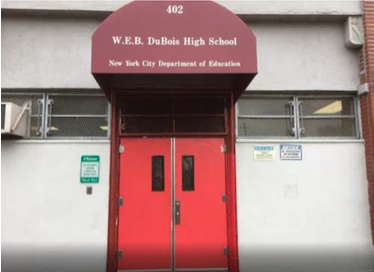 Education officials are mulling over keeping an African-American historical figure as part of the name of a Crown Heights high school, according to a consolidation plan set for a vote next month.

DuBois, a seminal figure in African-American history, preached self-empowerment and opposed the controversial Atlanta Compromise. He believed that Black empowerment came from increased political representation through the African-American intellectual elite, the idea that African-Americans needed the chances for advanced education to develop its leadership.

According to a Department of Education release, “the NYCDOE anticipates that the consolidated Aspirations will pursue a name change in order to incorporate the W.E.B. DuBois name into the name of the newly consolidated school.”

However, this minor reprieve could still erase DuBois from the title as school-naming and re-naming is subject to Chancellor’s Regulation A-860.

In February, the Department of Education (DOE) announced a new consolidation plan for DuBois that included a controversial name change and a leadership change from current DuBois Principal Katherine Costa to the principal of Aspirations.

The new plan reverses an original proposal that was set to shutter the historically minority Black and Hispanic school that sits in the middle of a gentrifying neighborhood. According to officials, the new plan is the result of Aspirations having a building lease end date of 2019 and to address low enrollment rates at both schools.

“The NYCDOE is proposing to consolidate W.E.B. DuBois with Aspirations based primarily on the benefits that students in both school communities would derive from the additional resources made available by consolidating the two school organizations into one. The low enrollment at W.E.B. DuBois has made it challenging for the school to offer the broad range of academic and extracurricular programs that are possible in larger schools,” read a DOE notice.

However, W.E.B. DuBois High School is a transfer high school serving overaged, undercredited students since 2001. The school has a history of serving academically challenged students and has been critical in the predominantly Black community of Crown Heights for giving second chances to any student willing to earn their high school diploma.

The consolidation plan is set for a final vote in April where the Panel for Educational Policy (PEP) will consider the proposal and make its final judgement.

If approved, the consolidation plan would not go into effect until the 2019-2020 academic calendar.

The final PEP vote is slated for 6 p.m., Wednesday, April 25 at Murry Bergtraum High School, at 411 Pearl Street in Manhattan.

Betsy DeBacle: The Head of Education Needs One