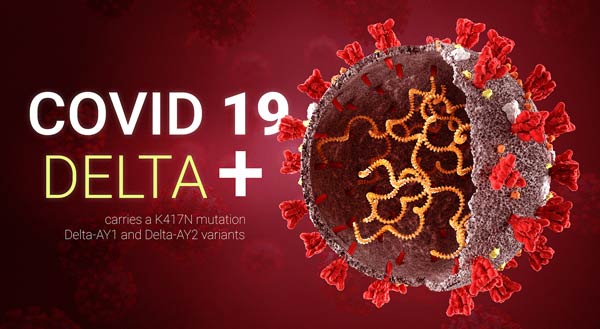 Laura Ramirez-Feldman
·Reporter/Producer
After declining sharply for months, coronavirus cases are climbing once again as a result of the Delta variant. Although they remain well below peak levels, the U.S. is now seeing about 30,000 new cases per day. The most recent seven-day average shows hospitalizations are also up by nearly 36 percent, according to the Centers for Disease Control and Prevention.

Since the COVID-19 vaccines are effective against the variant — especially when it comes to preventing serious illness — health experts say the recent uptick in cases and hospitalizations is primarily due to localized outbreaks in areas of the country with low vaccination rates. Currently, some of the most concerning hotspots are in Missouri, Arkansas, Louisiana and Florida. In these areas, where infection levels have soared, some hospitals are struggling to keep pace as the Delta variant spreads.

However, an uptick in cases has now been reported in all 50 states, including areas of the country with a comparatively higher percentage of the population vaccinated.
Yahoo News Medical Contributor Dr. Kavita Patel told Yahoo News that in the next six to eight weeks it is likely that cases will continue to rise — even in the Northeast, where infection levels have remained quite low. However, this surge, she said, is different from previous ones in that new cases “are almost all exclusively in people who are unvaccinated.”

Is the Delta variant more contagious than previous strains of the coronavirus?
Some experts have called Delta “the most troubling variant by far” due to its high transmissibility. According to the World Health Organization, the strain is about 60 percent more transmissible than B.1.1.7 — the U.K. variant that was recently renamed Alpha, which was the dominant strain of new cases in the United States until about a month ago.
The Delta variant first surged across India in March and April 2021, and pushed the country’s COVID-19 death toll past 400,000, according to the Indian government. But researchers from Brown, Harvard and the Center for Global Development believe the number is much higher (up to 5 million deaths).

In the United States, in just three weeks Delta progressed to dominance and now makes up approximately 83 percent of new cases in the country. Patel said this is just an estimate, and experts believe that number may be higher due to Delta’s ability to replicate faster. “We now have mounting evidence that the Delta strain itself reproduces in people’s nasal passages, mouth and body faster, up to 1,200 times higher than previous coronavirus strains,” she told Yahoo News.

This knowledge comes from a recent preprint study from China where scientists examined 62 cases of the Delta variant and found viral loads about 1,260 times higher than those found in 63 cases from when the virus was first detected in 2020. Based on this research, Delta also appears to be more infectious earlier in the course of illness, with an average of about four days for it to reach detectable levels inside a person, compared with six days for the original coronavirus variant.

Is Delta more dangerous?
Although Delta appears to be more contagious than other variants, it does not appear to be more severe. One recent study from Scotland suggests the Delta variant is about twice as likely as Alpha to result in hospitalization in unvaccinated individuals, but other data has shown no significant difference.
Patel said research is ongoing to determine whether the strain leads to higher-than-expected deaths or hospitalizations.

Who is most at risk?
Unvaccinated people are at risk. Dr. Rochelle Walensky, director of the Centers for Disease Control and Prevention, said at a COVID-19 briefing on Friday that “this is becoming a pandemic of the unvaccinated.”
Walensky said that more than 97 percent of people hospitalized with COVID-19 today are unvaccinated. Dr. Vivek Murthy, the surgeon general, said on Sunday that 99.5 percent of Americans who are dying are those who didn’t get the jab.

While nearly half of the entire U.S. population (48 percent) is fully vaccinated, the level of protection varies widely across and within states. Areas where vaccination rates are low are the most vulnerable at the moment. To know how your county ranks, the CDC just released a new tool that maps vaccination rates along with what it calls the Social Vulnerability Index (SVI). The SVI uses data on housing, transportation and poverty to estimate which communities are most vulnerable to disasters or disease outbreaks.

Counties with low vaccination rates and higher social vulnerability scores (red on the map) have more reasons to worry about Delta’s impact on their communities than counties with higher vaccination rates and lower social vulnerability scores (blue on the map).
Hospitals across the country are also reporting that those who are hospitalized with the Delta variant tend to be younger than in previous COVID-19 waves.

“I’m admitting young healthy people to the hospital with very serious COVID infections,” wrote Dr. Brytney Cobia, a doctor at Grandview Medical Center in Birmingham, Ala., in a poignant Facebook post Sunday. “One of the last things they do before they’re intubated is beg me for the vaccine. I hold their hand and tell them that I’m sorry, but it’s too late.”

Erik Frederick, chief administrative officer of Missouri’s Mercy Hospital Springfield, told Yahoo News that his hospital is also seeing younger patients who are sicker.
“Now we’re seeing patients that are really in a younger category, and when we think of our most critically ill patients, those that are on ECMO, which is a really high level of intensive care, all those patients right now are in their mid- to younger 50s, and that’s really unusual. We’ve also had patients on ECMO and in the ICU in their 20s, and even expire in their 20s,” Frederick said.

Kids are a concern as well. Even though Delta doesn’t appear to be a greater threat to children, there have been recent reports of hospitals treating critically ill kids with COVID-19. “We’re seeing also with new cases a number of pediatric infections,” said Patel. “We’re only seeing about 1 percent of COVID cases leading to hospitalization, compared to 15 to 20 percent of adult cases leading to hospitalization. It’s not at a higher rate than adult infections, but a great number of infections are in children.”

The reason we’re seeing cases in younger people, Patel said, is simply that almost 90 percent of older Americans, especially those over the age of 65, have had at least one dose of the vaccine. “In essence, they are no longer kind of easy for the virus to infect, so the virus just goes to a population that it can, then it’s infecting people who are not vaccinated, which tend to be younger people in general,” Patel said.

Does Delta cause different COVID-19 symptoms?
Patel said some of the symptoms being reported are classic COVID-19 symptoms, such as loss of smell, loss of taste, fever and a cough. However, Patel — who is a primary care physician — said doctors are also seeing symptoms they would normally see in a common cold and allergies, such as runny nose, headaches, sore throat and itchy eyes.
“Sometimes people think that they are allergies, and in many cases they might be, but they’re not necessarily those classic symptoms of a fever and loss of smell or taste. So I’m encouraging anybody who has had symptoms of any kind that they do not normally experience, that they should go to a doctor or somewhere where they can get a rapid test to find out within minutes if they might have COVID,” Patel said.

Can you get Delta if you’ve been vaccinated?
Those who are vaccinated might still catch Delta, but there’s no reason to panic, because most people who do will experience fewer symptoms with less severity. There have been a number of recent reports of fully vaccinated people testing positive for COVID-19. However, these breakthrough cases do not surprise or alarm doctors since they’re not occurring at concerning levels and the vaccines available continue to hold up well against the Delta variant.
“If you are vaccinated, remember you are safe from death and hospitalization,” said Patel.

“What we don’t have data on is whether you get vaccinated, get a breakthrough infection, maybe have no symptoms, but you might pass it to someone who’s unvaccinated. We are waiting to kind of have the clinical data to confirm if that might be the case, which is why we’re telling everyone if … you’ve got unvaccinated people in your household, then you should make sure you take precautions,” she added.

How can you protect yourself from the Delta variant?
Bottom line: Vaccines continue to be the strongest weapon against the virus. The most important thing you can do to protect yourself and loved ones from Delta is to get fully vaccinated, doctors say. That means two doses of the mRNA vaccines such as Moderna or Pfizer-BioNTech, or one dose of the Johnson & Johnson vaccine.

To further protect their citizens, some areas of the country where cases are rising, such as L.A. County, have reimposed mask mandates for both unvaccinated and vaccinated people when indoors. These are measures that have been taken to mitigate the spread of Delta. However, some experts note that the quality of those masks will matter.

Dr. Scott Gottlieb, former head of the Food and Drug Administration, told CBS News on Sunday that “trying to get N95 masks into the hands of vulnerable individuals in places where this is really epidemic” is going to be important, “even in cases where they’re vaccinated, if they want to add another layer of protection.”

What about children who are not yet eligible for the vaccines?
Children under age 12 are not yet eligible for any COVID-19 vaccine. Emergency use authorization of these shots for children may not come until midwinter, an FDA official said recently. Patel said the best thing you can do is “create a line of defense” for your children “by getting vaccinated yourself.” Additionally, she recommends treating them as if they are extremely vulnerable to getting infected and avoiding congested areas, especially indoor spaces.

“Choose outdoor spaces [and other places] with great air ventilation, and then the quality of your masks matter for kids. You really want to try to just protect and cover their nose and mouth as efficiently as possible,” Patel said.

Until there are widespread pediatric vaccinations, these tips will be important to keep children safe, especially going into the school year this fall. It is why, Patel said, the American Academy of Pediatrics made a very bold statement that any child over the age of 2, even those who are immunized over the age of 12, should be wearing a mask in school this fall.