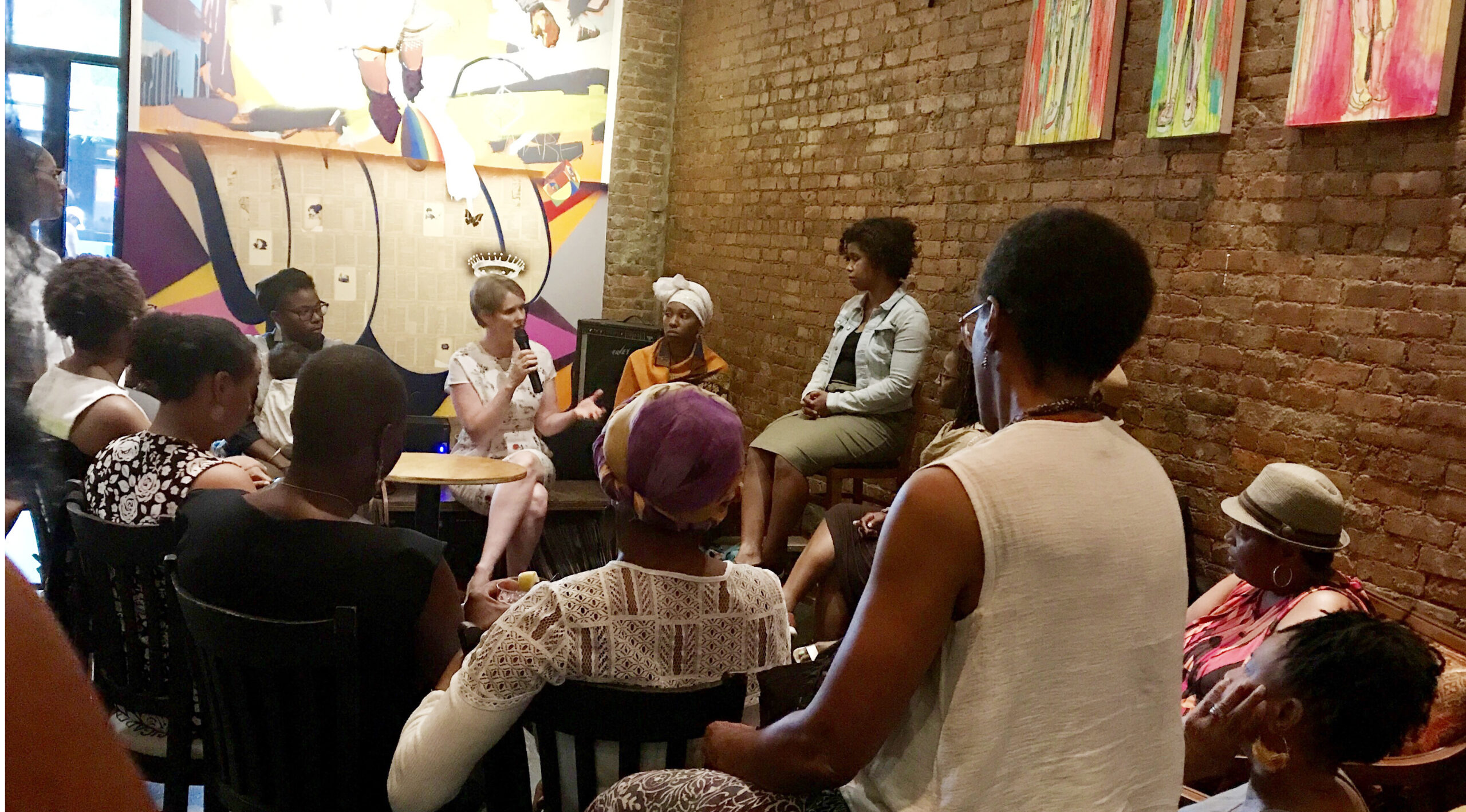 Exclusive to Our Time Press

It’s not certain what Cynthia Nixon, candidate for Governor of New York State, expected for her first “State of NY Women” dialogue held last week in Bedford-Stuyvesant. What she got, in any event, was an audience with a multigenerational gathering of informed and discerning Black women – courteous but unafraid to speak their minds. It was a job interview in a relaxed setting and Nixon handled herself well. She revealed a refreshing knowledge of a wide range of issues on this first leg of what will be a series of visits she’ll make statewide to find out what concerns Black women wherever they live.

Nixon’s campaign slogan reads: “A Progressive Fighter: Cynthia for NY.” Supporters tout her decade-long activism around issues affecting average New Yorkers. Education has long been chief among these. She was an early spokesperson for the Campaign for Fiscal Equity, addressing inequities in education in New York City when compared with other regions of the state. And as a member of Alliance for Quality Education, she organized with other public school parents and went to jail after protesting alongside Acorn founder Bertha Hope.

A daily subway rider, Nixon got off the A train at Nostrand Avenue and walked up bustling Fulton Street. (She would later reveal a thorough grasp of the issues surrounding the dismal state of the MTA.) At Basquiat’s Bottle, a spacious bar, café and gathering space with walls displaying the work of local artists, L. Joy Williams, a senior advisor to Nixon’s campaign, joined Zinerman in presenting the candidate to those gathered.

Black women got right to it, and although not all of the questions and answers can be reported in the scope of this article, what follows is an account of some of the exchange:

In response to a question about ending cash bail, Nixon addressed the injustice of the system but did not propose an alternative.

“We have a system right now,” said the candidate, “where whether or not you’re held in jail has nothing to do with whether you’re a flight risk or a threat to the community at large, or to an individual. So in other words, if you’re dangerous, you can buy your way out. It seems to me that if you’re a threat, no amount of money should be able to have you out. What they’ve found in other states is people show up for trial because they plan to, whether there’s bail being held for them or not. It doesn’t actually make any difference.

“I think it’s also really important, also that we stop arresting people for petty crimes, particularly people of color. We have so many people in jail right now for minor offenses. And then they’re held for months and years if they can’t afford bail. It shouldn’t be the deciding factor.”

“We need to fund community organizations that are already doing the work. My education plan is comprehensive from birth through college. One of the things that it allows for is a great increase in home visits for new mothers and new infants. We have a government that – in a desire to cut taxes and to basically leech revenue out of our state – has defunded the most crucial human services that we have. And we need those jobs because of the services they provide and can really be a life or death difference.”

This reporter asked, “What can be done about the inequities where in East New York, for example, homeowners are paying higher property taxes than Mayor de Blasio is paying in Park Slope? And secondly, can there be some teeth in the guidelines so when developers erect buildings and say they have affordable housing – the housing is actually affordable for people trying to remain in their communities?”

“Property taxes are an enormous problem around the state, and they’re really killing people. One of the most important things I think we need to do is that the state needs to take a bigger share of things so that it’s not always so vehemently on homeowners. In communities that are the hardest hit, we should have circuit breakers. We should look at people’s income and their savings and what they’re paying in their mortgage, and if it’s too onerous, we should be funding money so that it’s not impossible for them.”

A question was asked about the IDC (Independent Democratic Conference). Nixon credits her campaign with putting a fire under Governor Andrew Cuomo on several issues and an April New York Times headline said, “Cynthia Nixon has already won by moving the governor to the Left.” The IDC certainly looks like a case in point. Cuomo’s momentum recently advanced dramatically in reclaiming rogue Democratic state senators voting with Republicans as part of the IDC. Cuomo claimed for years that there was just nothing to be done about it, a stance some judged to be a cynical attempt to court Republican favor. But in April, later on the same day that Nixon mentioned Stewart-Cousins’ exclusion by IDC members on the “Wendy Williams Show,” Cuomo magically resolved the issue which had been a major frustration for liberals. Nixon says she would not have stood for it.

One woman’s pain was felt throughout the room as she very directly asked Nixon for a concrete answer to her question.

“I have a brother who’s been incarcerated most of his adult life, and he’s in his sixties,” the woman said. “It was three strikes and you’re out; it was robbery. He’s gone before the Parole Board several times, and he’s done more time than people who have murdered someone. And so talk to me about what complete overhaul of the criminal justice system would look like, and not just say, ‘Well, legalize marijuana, our kids won’t get arrested for it.’ That’s not the solution for me.”

“So sorry to hear that about your brother! It’s awful! It seems to me that one thing we need to do is change the nature of who sits on Parole Boards. And we need to change the point of view with which it’s determined who should be paroled. First of all, someone who’s gone to jail for that long, since that age, should never, unless they’ve committed the most heinous crime, should never be sitting in jail.

“It’s very important that we just stop throwing people in jail for petty offenses. We need to not have people sitting in jail just awaiting trial who are legally innocent. We have to also make sure that parole is not booby-trapped, we have to maximize their chances, give them the support they need to find a place to live and find a job and deal with the trauma. It’s like you’ve come back from a war and you need to make sure a person has the support to deal with the PTSD that they’re overwhelmed with when they try to reenter society. And we don’t want to keep tripping people up on these minor, little, technical infractions that are just yanking them back into the system.”

Paulette Tabb Jeppe, a Bedford-Stuyvesant homeowner and retired educator said, “You touched on corruption in government, in relation to real estate development. I want to know, what do you propose to do about New York’s homeless problem? And also prices for NYCHA?”

“So, some of the homelessness crisis is, of course, due to mental illness, and I think we have to do a much better job with mental health services. But the vast majority of it is due to a lack of affordability. We have to get rid of this idea we have that if we really help people that are homeless into housing, that this is going to cause an explosion of homelessness from people who are expecting to be given housing. I think nothing could be farther from the truth, and that actually if we spend the money to solve the problem, it would also end up costing the city and the state a lot less in the long run.”

“NYCHA has been underfunded by everybody: by the city, by the state, by the feds – for so long. I think it’s good that the city has agreed to put in a billion dollars, that’s a start. The governor has agreed to put in $250 million; that’s too little, too late, and we’ll see if he really comes up with it. One of the things that has been so wrong is when he actually gives a chunk of money, he doles it out in tiny little parcels so that it can’t be used for overarching needs like replacing roofs, fixing leaks, getting the mold out, getting the asbestos out and lead paint.

“We need a wholesale investment and I think it’s important that we have a federal monitor there. My hope is that this person, that committee – will be somewhat objective and will put both the city and the state’s feet to the fire about what is needed. Cutting corners is what happens when you have such a massive institution and you do not fund it and do not prioritize the lives of the tenants.”

Political consultant Stefani Zinerman, a co-founder of Woman-Up Brooklyn, curates State of NY Women. She’ll be doing the same for others going forward – organizing “intimate conversations” between candidates and the constituents they aim to serve.

“Over the past election cycle, Black women have emerged as a crucial demographic for candidates seeking elected office,” says Zinerman. “My role in communities across New York State is to ensure that we get in the room and help set an agenda that meets our needs.” This candidate was game.

East New York: We Walk in a Field of Dreams