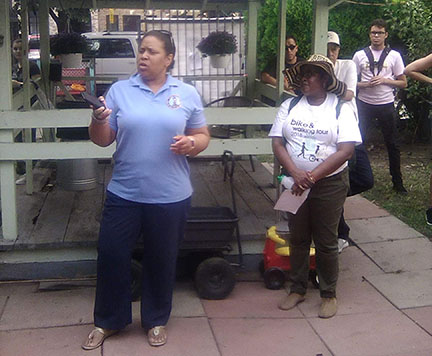 In the midst of fast-paced urban Brooklyn, there exists lush, quiet oases. These oases were once building lots where Italianate rowhouses or federal-style mansions stood. Now, they are community gardens where, in the main, neighbors come together to grow food. Other community gardens grow food and flowers. Still, others have chicken coops. On Saturday, September 15, 2018, the Brooklyn-Queens Land Trust (BQLT) sponsored the 7th Annual Bike and Walking Tour 2018.

The garden where the tour started was the Concerned Citizens of Grove Street Garden (Grove Garden) at 72 Grove Street. This garden is 37 years old and it was here where walkers and riders checked in, collected water bottles, ate snacks and purchased T-shirts before the tour commenced. BQLT has 36 community gardens throughout Brooklyn and Queens. Most are located in Bedford-Stuyvesant, Crown Heights and Bushwick. Moriba Jackson, BQLT Vice President said, “The gardens are open to the community and the community controls them.” Jackson encouraged the event attendees to come out and support these open spaces. “Please donate, come into a garden and offer to volunteer your time and energy.”

Nan Blackshear, Community Affairs Director for Brooklyn Borough Hall, was present and participated in the walking tour. Blackshear explained that BP Eric Adams considers himself “very green-oriented and health-oriented.” Adams attributes transitioning to a plant-based diet to healing himself of diabetes. Blackshear noted about the Grove Garden: “This is truly a beautiful location.” Ms. Blackshear was one of the 37 people who took part in the walking tour from start to finish.

The Founder and President of Concerned Citizens of Grove Street Garden is Jaime Alvarez. Alvarez stated, “This garden is 37 years old. This garden was the only garden with four goats. We kept them in the garden as long as we could.” Given there were and are ordinances against such livestock, NYPD officers would be dispatched out to the property. Alvarez said, “The police officers drove by to observe the goats and soon would leave. Two of the goats were named Pepe and Pepa. The garden members were able to attract the interest of some students from El Puente Academy who are active gardeners there.”

The tour started by having the bikers leave before the walkers. This resulted in having adequate space at each garden stop to walk around. The five gardens tended to be small, lovely green spaces that featured gazebos and winding-stone footpaths. Taking a few steps into each invited a quiet calm. The second garden visited was Woodbine Street Block Association Garden. Present to greet the walkers were Sean Michael Fleming, Garden Director and Verena James, Block President. Fleming explained that the genesis of this garden was the 1970s Blackout. “The Blackout resulted in a 40% reduction in Bushwick’s population. Where we are standing was an abandoned lot. We started this garden by neighbors bringing buckets of water here to water the plots.”

Fleming and James are concerned about the loss of community gardens from luxury housing development. Fleming opined, “Once these gardens are lost, they are gone for good.” Verena James concurred by stating, “This space is ours and it’s not going anywhere. We’re trying to get the kids involved in gardening…let them get their hands dirty.”

The tour then traveled to the Garden of Angels on Greene Avenue which was larger than the previous two gardens. This space featured a pear tree, garden boxes and a chicken coop without a rooster. The hens each laid 3-4 eggs daily. The officers present were Charles Barnes, Garden Representative; Lonnie Murray, Vice President; James Smith, co-Vice President; Stephanie Rebonati, member; and Sedon Pepper, member. It seemed with all her knowledge of the garden’s personnel and operations, Ms. Rebonati was suited to be the Secretary; however, “member” suited her.

Charles Barnes explained that Garden of Angels was established either in 1995 or 1996 by the Trust for Public Land. Barnes and a female walker engaged in conversation about farming. Both were raised in rural southern towns. They both jokingly agreed that farming was strenuous work and did not want it as a career. The tour group left from here to visit the Patchen Avenue Garden. This garden has been tended by the Block Association since 1981. Sherwin Perreira, a garden member, greeted the walkers and shared his observations of the garden and the surrounding community. “This garden is used for gardening, however, the construction of taller buildings in this part of Bed-Stuy is blocking the sunlight.” Perreira sees that the neighborhood is experiencing changes in demographics.

The final stop on the walking tour (the bike tour had seven stops) was at The People’s Garden, located at the northwest corner of Broadway and Greene Avenue. The People’s Garden was larger than either the Garden of Angels or Grove Garden. It was divided into six sections festooned with artistic directional signage, two solar panels, free-range chickens that roamed throughout this expansive garden, an aqua and mauve gazebo, and a performance space.

BQLT partnered with the Haiti Cultural Exchange to bring musical talent to the garden. For the past two years, Haiti Cultural Exchange has been bringing Haitian arts and culture to community gardens in order to make them sustainable areas. Strings & Skins performed in the garden that evening. The band consisted of Luisa Bastides, vocalist, electric violinist and rapper; Okai, percussionist and dancer; Tenzin Hunter, acoustic guitar player; Matt, e-cussionist; and Prince Amu, electric bass player. Their performance brought a surge of energy throughout the area. People danced on the sidewalk while waiting for the bus. The other performing act was the Ricky Quinones Duo.