City Council District is Changing Next Year. Here’s How to Weigh In
Advertisement 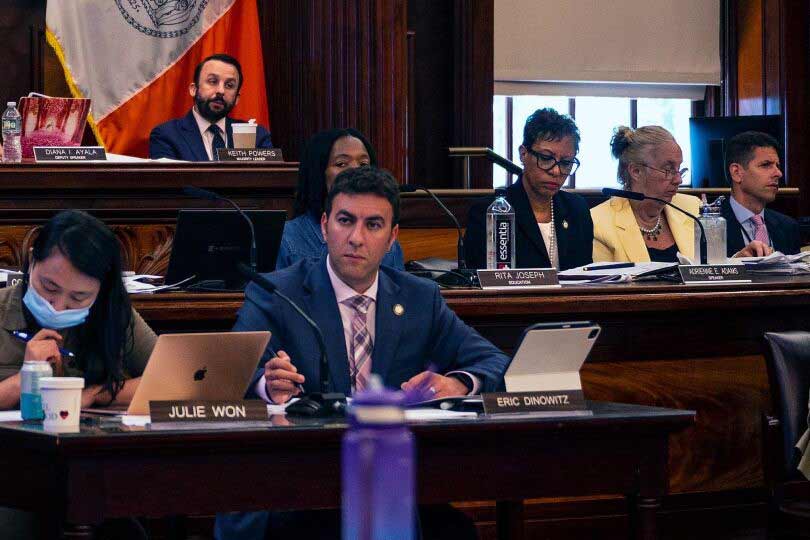 The commission charged with drawing new political boundaries for New York City’s legislative body will take input from the public through end of August.

Originally Published in The City

By Rachel Holliday Smith
Hiram Alejandro Durán
THE CITY
Your new City Council district is being drawn right now. And you can weigh in on the process over the next month.
A first draft of New York’s next era of council district has already been released, created and unveiled by the NYC Districting Commission in mid-July. You can see it here.

The commission is a 15-member board established by charter mandate to draw up new districts for the 51 future members of the City Council that reflect the latest population data gathered during the 2020 Census.

The once-a-decade count showed that a lot changed between 2010 and 2020. New York City’s population increased by more than 600,000 people and, while it’s dropped since over the course of the pandemic, it’s the 2020 count that matters for how the lines get drawn now. And, since 2010, the population of Asian and Hispanic New Yorkers went up by 7.7% and 6.6%, respectively, while the Black population dropped by 4.5%.

When drawing its map, the commission has to keep many factors in mind, including: fair representation of racial groups, keeping neighborhoods and communities intact, avoiding districts that cross borough lines and keeping each district’s population roughly equal.

In an ideal scenario, based on census figures, each Council district would include about 172,000 people, and the difference between the least and most populous districts cannot be more than 5% of the average district, or about 8,600 people.

Take a look at how the commission’s preliminary map — which it had been working on since last March — differs from the current Council districts at: nyc.redistrictingandyou.org, an interactive mapping project from the CUNY Graduate Center:

The commission’s new map would shake up district lines in several notable ways, including boundaries that create a new seat in southern Brooklyn that would reflect and consolidate the booming Asian population in the area.

For years, local Asian political activists have organized and lobbied for better representation in the city, including in the redistricting process for state-level seats that took place earlier this year and last fall, as THE CITY previously reported.

As Politico New York first noted, it would also keep Staten Island’s three seats virtually unchanged despite slower population growth there, a big win for Council Minority Leader Joe Borelli, who holds one of those seats.
The commission has to submit its final map to the City Council for approval by Sept. 22.

Between now and then, you’ll have an opportunity to weigh in, either by emailing input to publictestimony@redistricting.nyc.gov or speaking in person or remotely at one of the five public hearings the commission will hold in August.

Those who want to attend the hearings remotely should visit nyc.gov/districting the morning of the event for livestream information.
The City Charter mandates the maps must be finalized and sent to the city clerk by Feb. 7, 2023. They will go into effect at that time, ahead of the 2023 City Council elections.
Reminder: Current Council members are only serving an abbreviated two-year term due to the districting changes.

“THE CITY is an independent, nonprofit news organization dedicated to hard-hitting reporting that serves the people of New York.” THE CITY