Channeling Outrage into Action on Behalf of Homeowners
Advertisement 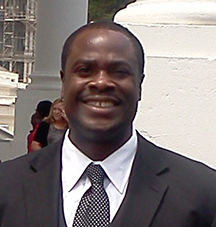 As Mayor Bill de Blasio doubles-down in his defense of HPD’s (Housing, Preservation and Development’s) Third Party Transfer (TPT) program, Rev. W. Taharka Robinson will not relinquish ground in the fight against it. The mayor’s stance rated a higher level of attention recently as the City added co-op apartments to TPT’s aggressive oversight responsibilities (some say “land-grab”). But Robinson’s immediate concern is calling on political forces and people resources on behalf of homeowners whose properties are being taken.

Through his Urban Political Association, founded in 2012, Robinson will urge City Council members to end or suspend TPT. He is energetically on this case, as are people like James Caldwell, president of the 77th Precinct Community Council, (who first alerted Robinson to the issue), and Stephen Witt, founder and publisher of the Kings County Politics website (and former Our Time Press staff writer). They’re outraged by stories like that of Maureen Saunders, whose family home was seized, without notification, on bogus charges of tax delinquency and disrepair. It could have been sold to developers without her knowledge. (See OTP ____ issue for background on this case and an overview of the issue.)

Robinson, son of former Council Member Annette Robinson, has had the community activism drive for some time. He founded the Brooklyn Anti-Violence Coalition in 2007, addressing murders, domestic violence, rape, gun violence and gang activity in the community. “You look at the elements that create violence and try to deal around that. We tried to encompass every circumstance, from fiscal to professional, to community perspective, to create a stabilized, grounded community.”

Now Robinson is organizing a demonstration outside the office of Council Member Ben Kallos, who in 2015 introduced the aggressive expansion of TPT, allowing illegal seizure and sale of private homes.

“Demonstrators will be there to tell Kallos he made a mistake,” said Robinson. “He can put in an amendment to this legislation he submitted three years ago.”

Robinson will also organize demonstrations outside the offices of councilmembers who voted for the bill.

“And we have to call upon the Chair of the New York City Council’s Housing and Buildings Committee, Councilman Robert E. Cornegy Jr. He can put things in place to help us bring this together.”

.“When this legislation was passed there were no rules – nothing put in place to protect homeowners. So, you have circumstances such as with Maureen Saunders, whose property was part of a cluster sale. What is a cluster sale? Now, you’re a tenant, not the owner. We’re talking about people who have been hard-working for 30, 40 years, living in their homes and then you tell them they have no place to go. You have a $2-million-dollar piece of property and you’re gonna take it for $30 or $40 thousand dollars?! That’s absurd, and it’s unconscionable! And many of these people, [particularly tenants in a seized building] cannot afford legal representation. I have attorneys who are willing to assist. There’s a four-month window during which people can get their properties back.”

Robinson wants to be called upon as well. He invites community members to contact him at bavcinc@aol.com

Wofford Calls for State Investigation Over City’s Taking of Properties