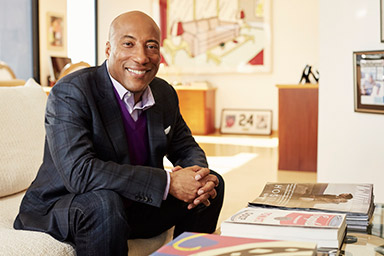 Byron Allen’s racial discrimination case against Comcast came before the Supreme Court on Wednesday, as some of the justices questioned what a plaintiff has to show in a pleading to survive beyond its initial stages.

At issue is whether Allen’s $20 billion lawsuit should have survived beyond the pleading stage by merely proving that his race was a “motivating factor” in Comcast’s decision to deny carriage of his company’s channels, or whether it was the sole cause, something called “but for” in legalese.

The Ninth Circuit ruled in favor of Allen last year, and some of the justices found fault with the lower court’s reasoning. There also was skepticism of issuing a definitive ruling that established a lower threshold when a case is first filed, and a higher one if it reaches a trial.

“Wouldn’t it be unusual for us to say that the test for the pleading stage is motivating factor, but the test at the trial or at summary judgment is ‘but-for’?” Justice Neil Gorsuch asked.

Justice Elena Kagan said that having two different standards would be “confusing.”

Erwin Chemerinsky, who was arguing for Allen, acknowledged that Allen eventually would have to show that race was the sole cause for Comcast’s rejection. But he also said that it would be an “insurmountable burden” to meet if plaintiffs have to prove that at the outset of the case, as they would not have the benefit of conducting depositions and discovery.

“It’s not realistic to say to the plaintiff that you have to allege that this was the but-for cause and deny all other causes at that stage,” he said.

Chief Justice John Roberts pressed  Chemerinsky whether the court had to consider whether a claim is plausible — citing a hypothetical in which race is suggested in a law firm’s job rejection letter, but the applicant also did not meet the requirement that they went to law school. Toward the end of the oral arguments, Justice Samuel Alito cited Allen’s initial claim, saying it the complaint “goes on and on and on with a lot of facts, including an allegation that Comcast entered into a racist conspiracy with the NAACP, the National Union League, Al Sharpton and the National Action Network.”

He asked Chemerinsky whether he thought it had any impact on the district court’s initial decision to dismiss the case.

Chemerinsky said that it should not have, as the complaint was amended.

“Mr. Allen was told over many years things to do and he’d get carriage,” he said. “He did those and didn’t get carriage; that he was told that there was no bandwidth, but they then carried 80 white-owned channels, that all of the channels that are carried by the other cable companies are carried by Comcast, except for Mr. Allen’s channels.”

But Comcast’s counsel, Miguel Estrada, seized on Alito’s remarks to outline other allegations that Allen has made in his amended complaint, including that Magic Johnson and P Diddy Combs, ”signed up with Comcast” to distribute their own channels “to give us cover for our racial discrimination.”

He said that if Allen’s claims of a “racist plot” satisfies past precedent for what is plausible, then “the civil justice system has real problems.”

In their ruling, the Ninth Circuit focused on Allen’s other claims. He said that Comcast told him they didn’t have the bandwith to carry his channels, but they accepted carriage of other channels with white owners.

As much as the justices were critical of the Ninth Circuit’s decision, there also was a suggestion that they could reach a decision still gives Allen another chance to pursue his case. That would be a decision that directs the Ninth Circuit to consider Allen’s case under different reasoning.

The case hinges on a section of the Civil Rights Act of 1866 that holds that African Americans must have the same right to contracts as whites.

Justice Sonia Sotomayor pressed an attorney for the Trump administration on why they believe that the law establishes a “but for” standard.

“I am looking at the statute, and I don’t see any of the ‘but for’ language, ‘because of’ or any of the other that we have interpreted in any other statute.” she said.

She suggested that “as long as you have enough in the case to suggest racial animus” and that it might be proved to be the “but for standard,” “that’s enough.”

“What I see is a statute that says all citizens must have the same right,” she said. “And if you — talking about in the making, performance, execution of the contract. And we’ve also said the civil rights law was designed to eliminate all race discrimination. I’m not sure how we can square those two things with a ‘but-for’” standard.

“How can it be that if you’re treated differently because of your race in the formation of the contract, but you’re denied the contract for another reason?” she asked.

Justice Stephen Breyer at one point suggested that the argument was in a way “academic.”

“Suppose the opinion said, ‘Look, it’s the defendant who knows what’s in his mind.’ How can you expect a plaintiff normally to know everything in the defendant’s mind? How could you?’ And so all [the plaintiff] has to do is allege, on information and belief, that he thinks that this racial part of it was motivating. And call that ‘motivating’ or call it ‘but-for.’

To some laughter, Chemerinsky said he could accept such an outcome. But he also said that he wanted “the law to be clear that motivating factor is sufficient.”

Justice Ruth Bader Ginsberg was not present at the oral arguments, as she was recovering from an illness, Roberts announced at the start. She will participate in the deliberation of the case.

Outside the courthouse, a group of demonstrators held signs that read, “Stop Comcast, Keep Starz,” a reference to a simmering carriage dispute.

“Rather than eviscerate the law to hurt over 100 million Americans, just deal with me and the lower court,” Allen told reporters afterward.