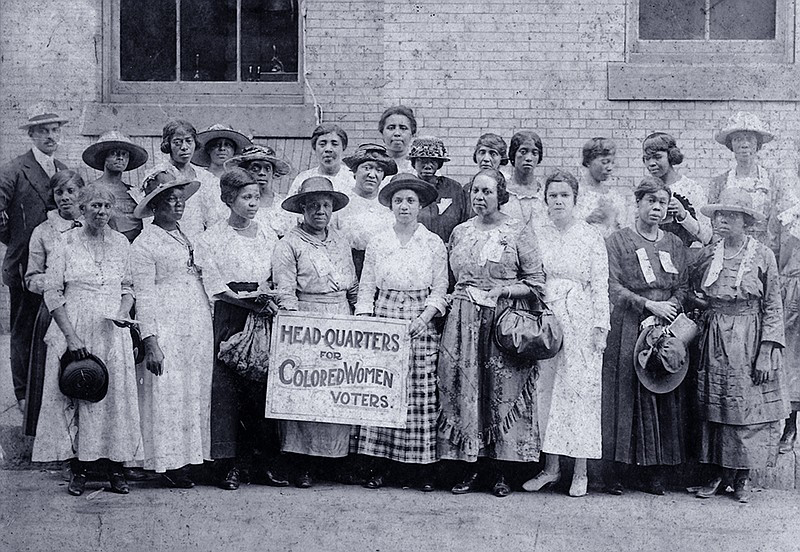 It was the 1880s in Post-Reconstruction America, and Black men had limited voting rights, and Black women, like white women, had no voting rights. In New York, as around the U.S., Black women collaborated and created clubs dedicated to education, civil rights, healthcare, and family. By the late 1880s, educator Sarah J. Garnet, born a free woman in Brooklyn in 1831, started Brooklyn’s Equal Suffrage League to advocate for voting rights for Black women. Later, Garnet’s suffragist role would be expanded nationally as the Superintendent of the Suffrage Department for the National Association of Colored Women’s Clubs (NACWC).

On Saturday, October 15, from 1:00 pm to 2:30 pm at Cuyler Park in Fort Greene, there will be a special dedication ceremony and unveiling of a historical plaque honoring the legacy of Brooklyn’s Black women suffragettes. This Black Women Suffragists Memorial Dedication Ceremony will mark the placement of a historical plaque at 405 Carlton, which once served as the headquarters for the Equal Suffrage League of Brooklyn. The dedication is part of the National Votes for Women Trail, a project to recognize sites associated with the American suffragist movement and the National Association of Colored Women’s Clubs. To honor Brooklyn’s brave suffragists, the public is requested to wear purple, gold, and or white.

To explore the history of the National Association of Colored Women’s Clubs (NACWC), Our Time Press spoke to Opal Bacon, its president. “In the late 1800s and early 1900s, Black women formed clubs to address many issues in civil rights, voting, and other things. They did not have access to some of the clubs headed by white women. So, we had to form our own,” she explained. Suffragists with the organization included legendary journalist-activists Ida B. Wells and Mary Church Terrell. “They discovered that you can’t work alone. So, to be more effective, the clubs came together in 1895 in Boston. In 1896 they united and formed the National Association of Colored Women’s Clubs. This gave us a national platform. A united front with everybody working together.”

For 125 years, NACWC has had a mission dedicated to Black women uplifting women, children, families, the home, and the community through service, community education, scholarship assistance, and the promotion of racial harmony among all people.

Headquartered in Washington, DC, NACWC has members in 33 states, including active clubs in New York and New Jersey. Younger women ages 18 to 25 have formed NACWC chapters in cities and on college campuses. “All of a sudden, we are growing with the younger women,” said Bacon. “These young women are sharing our information online, and we are growing leaps and bounds.”

During September, NACWC collaborated with organizations around the U.S. for a massive voter registration drive. “Right now, we’re still fighting for that right to vote. Many states are now legislating laws and rules, which, to me, are hidden Jim Crow rules. I grew up in Texas, where we had to have certain things to vote for. I know my parents did not vote because it concerned money,” she explained. “Now we have all of this coming back running full circle. We are still working to address things that were issues 100 years ago. Things have gotten better, but they haven’t completely changed.”

For more information on NACWC, please check out www.nacwc.com.

W. E. B. Du Bois Complex in Accra, Ghana will be a global center for Pan African study, culture, and tourism