“Be Not Afraid.” President Biden Speaks to the World
Advertisement 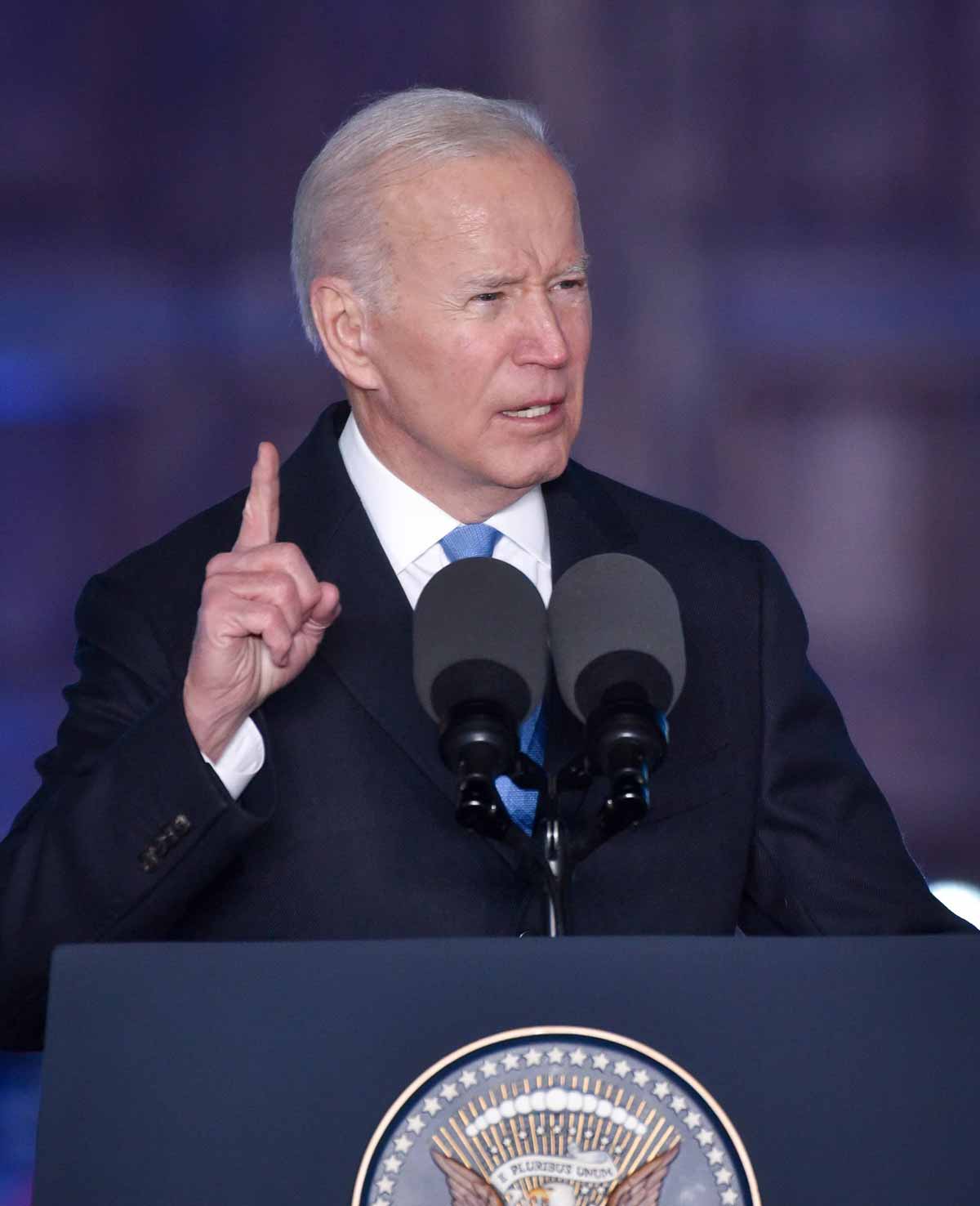 THE PRESIDENT
“Be not afraid.”  They were the first words at the first public address of the first Polish Pope after his election on October of 1978.  They were words that would come to define Pope John Paul II.  Words that would change the world …Today, Russia has strangled democracy — has sought to do so elsewhere, not only in its homeland.  Under false claims of ethnic solidarity, it has invaded neighboring nations.

Putin has the gall to say he’s “de-Nazifying” Ukraine.  It’s a lie.  It’s just cynical.  He knows that.  And it’s also obscene.President Zelenskyy was democratically elected.  He’s Jewish.  His father’s family was wiped out in the Nazi Holocaust.  And Putin has the audacity, like all autocrats before him, to believe that might will make right In my own country, a former president named Abraham Lincoln voiced the opposing spirit to save our Union in the midst of a civil war.  He said, “Let us have faith that right makes might.”  “Right makes might.”  (Applause.)

Today, let us now have that faith again.  Let us resolve to put the strength of democracies into action to thwart the designs of our — the designs of autocracy.  Let us remember that the test of this moment is the test of all time The Kremlin wants to portray NATO enlargement as an imperial project aimed at destabilizing Russia.  Nothing is further from the truth.  NATO is a defensive alliance.  It has never sought the demise of Russia.

In the lead-up to the current crisis, the United States and NATO worked for months to engage Russia to avert a war.  I met with him in person and talked to him many times on the phone.
Time and again, we offered real diplomacy and concrete proposals to strengthen European security, enhance transparency, and build confidence on all sides But Putin and Russia met each of the proposals with disinterest in any negotiation, with lies and ultimatums.  Russia was bent on violence from the start …There is simply no justification or provocation for Russia’s choice of war.  It’s an example of one of the oldest of human impulses: using brute force and disinformation to satisfy a craving for absolute power and control It’s nothing less than a direct challenge to the rule-based international order established since the end of World War Two And it threatens to return to decades of war that ravaged Europe before the international rule-based order was put in place.  We cannot go back to that.  We cannot.

The gravity of the threat is why the response of the West has been so swift and so powerful and so unified, unprecedented, and overwhelming.
Swift and punishing costs are the only things that are going to get Russia to change its course.

Within days of its invasion, the West had moved jointly with sanctions to damage Russia’s economy Russia’s Central Bank is now blocked from the global financial systems, denying Kremlin’s access to the war fund it stashed around the globe We’ve aimed at the heart of Russia’s economy by stopping the imports of Russian energy to the United States To date, the United States has sanctioned 140 Russian oligarchs and their family members, seizing their ill-begotten gains: their yachts, their luxury apartments, their mansions We’ve sanctioned more than 400 Russian government officials, including key architects of this war These officials and oligarchs have reaped enormous benefit from the corruption connected to the Kremlin, and now they have to share in the pain
The private sector is acting as well.  Over 400 private multinational companies have pulled out of doing business in Russia — left Russia completely — from oil companies to McDonald’s.

As a result of these unprecedented sanctions, the ruble almost is immediately reduced to rubble.  The Russian economy — (applause) — that’s true, by the way.  It takes about 200 rubles to equal one dollar.
…At the same time, alongside these economic sanctions, the Western world has come together to provide for the people of Ukraine with incredible levels of military, economic, and humanitarian assistance In the years before the invasion, we, America, had sent over $650 million, before they crossed the border, in weapons to Ukraine, including anti-air and anti-armor equipment Since the invasion, America has committed another $1.35 billion in weapons and ammunition And thanks to the courage and bravery of the Ukrainian people — (applause) — the equipment we’ve sent and our colleagues have sent have been used to devastating effect to defend Ukrainian land and airspace.  Our Allies and partners have stepped up as well But as I’ve made clear: American forces are in Europe — not in Europe to engage in conflict with Russian forces.  American forces are here to defend NATO Allies Yesterday, I met with the troops that are serving alongside our Polish allies to bolster NATO’s frontline defenses.  The reason we wanted to make clear is their movement on Ukraine: Don’t even think about moving on one single inch of NATO territory We have a sacred obligation — (applause) — we have a sacred obligation under Article 5 to defend each and every inch of NATO territory with the full force of our collective power And earlier today, I visited your National Stadium, where thousands of Ukrainian refugees are now trying to answer the toughest questions a human can ask: “My God, what’s going to happen to me?  What’s going to happen to my family?”

I saw tears in many of the mothers’ eyes as I embraced them; their young children — their young children not sure whether to smile or cry.  One little girl said, “Mr. President” — she spoke a little English — “is my brother and my daddy — are they going to be okay?  Will I see them again?”  Without their husbands, their fathers, in many cases, their brothers or sisters who stayed back to fight for their country Rather than breaking Ukrainian resolve, Russia’s brutal tactics have strengthened the resolve.  (Applause.)

Rather than driving NATO apart, the West is now stronger and more united than it has ever been.  (Applause.)

Russia wanted less of a NATO presence on its border, but now  we have a stronger presence, a larger presence, with over a hundred thousand American troops here, along with all the other members of NATO In fact — (applause) — Russia has managed to cause something I’m sure he never intended: The democracies of the world are revitalized with purpose and unity found in months that we’d once taken years to accomplish It’s not only Russia’s actions in Ukraine that are reminding us of democracy’s blessing.  It’s our own country — his own country, the Kremlin, is jailing protestors.  Two hundred thousand people have allegedly already left.  There’s a brain drain — leaving Russia.  Shutting down independent news.  State media is all propaganda, blocking the image of civilian targets, mass graves, starvation tactics of the Russian forces in Ukraine.

Is it any wonder, as I said, that 200,000 Russians have all left their country in one month?  A remarkable brain drain in such a short period of time, which brings me to my message to the Russian people:
I’ve worked with Russian leaders for decades.  I sat across the negotiating table going all the way back to Soviet Premier Alexei Kosygin to talk arms control at the height of the Cold War I’ve always spoken directly and honestly to you, the Russian people
Let me say this, if you’re able to listen: You, the Russian people, are not our enemy

I refuse to believe that you welcome the killing of innocent children and grandparents or that you accept hospitals, schools, maternity wards that, for God’s sake, are being pummeled with Russian missiles and bombs; or cities being surrounded so that civilians cannot flee; supplies cut off and attempting to starve Ukrainians into submission

Millions of families are being driven from their homes, including half of all Ukraine’s children.  These are not the actions of a great nation
Of all people, you, the Russian people, as well as all people across Europe, still have the memory of being in a similar situation in the late thirties and forties — the situation of World War Two — still fresh in the minds of many grandparents in the region What — whatever your generation experienced — whether it experienced the Siege of Leningrad or heard about it from your parents and grandparents — train stations overflowing with terrified families fleeing their homes; nights sheltering in basements and cellars; mornings sitting through the rubble in your homes — these are not memories of the past.  Not anymore.  Because it’s exactly what the Russian army is doing in Ukraine right now

Putin can and must end this war.  The American people stand with you and the brave citizens of Ukraine who want peace And my message to the rest of Europe: This new battle for freedom has already made a few things crystal clear

First, Europe must end its dependence on Russian fossil fuels.  And we, the United States, will help.  (Applause.)  That’s why just yesterday, in Brussels, I announced a plan with the President of the European Commission to get Europe through the immediate energy crisis Over the long term, as a matter of economic security and national security and for the survivability of the planet, we all need to move as quickly as possible to clean, renewable energy.  And we’ll work together to help get that done so that the days of any nation being subject to the whims of a tyrant for its energy needs are over.  They must end.  They must end.
And second, we have to fight the corruption coming from the Kremlin to give the Russian people a fair chance And finally, and most urgently, we maintain absolute unity — we must — among the world’s democracies …It will not be easy.  There will be costs.  But it’s a price we have to pay.  Because the darkness that drives autocracy is ultimately no match for the flame of liberty that lights the souls of free people everywhere Time and again, history shows that it’s from the darkest moments that the greatest progress follows.  And history shows this is the task of our time, the task of this generation …So, in this hour, let the words of Pope John Paul burn as brightly today: “Never, ever give up hope, never doubt, never tire, never become discouraged.  Be not afraid.”  (Applause.)

A dictator bent on rebuilding an empire will never erase a people’s love for liberty.  Brutality will never grind down their will to be free.  Ukraine will never be a victory for Russia — for free people refuse to live in a world of hopelessness and darkness We will have a different future — a brighter future rooted in democracy and principle, hope and light, of decency and dignity, of freedom and possibilities

The Pride of Generations