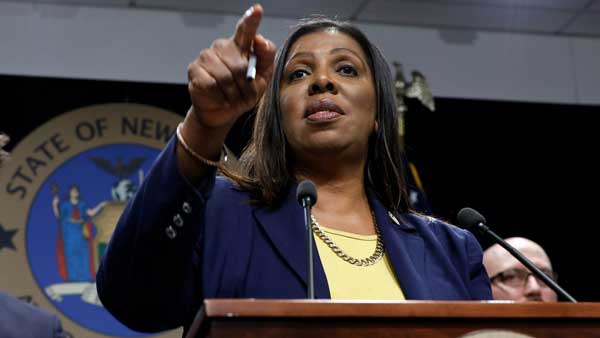 NEW YORK – New York Attorney General Letitia James today led a coalition of states and cities from across the country in filing a lawsuit to stop the Trump Administration’s attempts to dismantle the United States Postal Service (USPS) and disrupt operations in an effort to undermine the November presidential election.

The suit — filed against President Donald Trump, the USPS, and Postmaster General Louis DeJoy — comes a day after the postmaster general finished testifying before Congress in which he refused to reverse policies that have slowed mail operations across the nation. In recent weeks, the USPS — under General DeJoy’s directives — has begun to scale back operations that would significantly undermine the USPS’s ability to handle what is expected to be a record number of mail-in ballots this November because of the coronavirus disease 2019 (COVID-19) pandemic.

The slowdown is already having life-threatening impacts on veterans and seniors who are not receiving medication and economic impacts on individuals waiting for their pensions and paychecks.
“This USPS slowdown is nothing more than a voter suppression tactic,” said Attorney General James. “Yet, this time, these authoritarian actions are not only jeopardizing our democracy and fundamental right to vote, but the immediate health and financial well-being of Americans across the nation. We will do everything in our power to stop the president’s power grab and ensure every eligible voter has the opportunity to cast a ballot come November.”
The U.S. federal mail system has been a critical part of American infrastructure since before the United States declared its independence. For more than 200 years, the federal postal service has provided reliable, vital services to millions of Americans, and, for the last 50 years, the USPS has acted as an independent agency — severed from the president’s cabinet — in an effort to ensure its political independence. But, earlier this year — in the middle of the COVID-19 pandemic — a new postmaster general was appointed, who immediately led efforts to begin an “operational pivot” to overhaul how the USPS collects, processes, and delivers mail throughout the country.

In today’s lawsuit — filed in the U.S. District Court for the District of Columbia — Attorney General James leads the coalition of three states and two cities in arguing that significant and recent changes to USPS operations under DeJoy’s leadership have substantially delayed USPS mail in New York and across the country. These include removing mailboxes and mail sorting machines, curtailing overtime for USPS staff, prohibiting late and extra trips that ensure mail is delivered on a timely and consistent basis, institutionalizing other policies that cause further delays, and creating confusion regarding what election mail standards the USPS will follow in advance of the November general election. The suit further alleges that changes in USPS operations are in line with President Donald Trump’s repeated and public statements in opposition to mail-in voting and his intent to impair the delivery of mailed ballots by cutting off the resources needed for the USPS to operate because mailed ballots would specifically harm Republicans’ abilities to win elections, even going so far as to make clear last month in a tweet that “Republicans, in particular, cannot let this happen!”

These changes reflect a significant departure from the USPS service standards, fail to adhere to the USPS’s statutory obligations, and fail to recognize USPS’s historic and critical role in America’s infrastructure. Further disconcerting is the fact that these changes come at a time when New York and the rest of the country — due in part to the COVID-19 pandemic — are relying on mail more than ever to deliver timely and critical services, including medication and other items, legal notices, and, crucially, election mail, as Americans near the November general election.

Yes, Donald Trump is a Racist