AG James Brings It On: Files lawsuit to dissolve New York-headquartered NRA for “Getting Away With Murder”
Advertisement 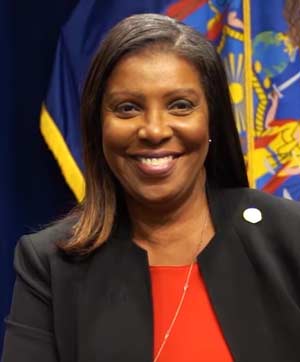 President Trump wants to call himself a “law and order” president, but in response to New York Attorney General Letitia James’ most recent action, a lawsuit against the National Rifle Association for blatantly criminal acts, he called her action a “terrible thing.”
The NRA is the most influential pro-gun organization in the nation –but it’s also, according to Tish’s press release of last Thursday, one of New York State’s biggest lawbreakers.
No, it It can not be said that the NRA pulled the trigger on hundreds of gunshot victims, like Davell Gardner age 1, who died two weeks ago in a run-by shooting.

But Tish’s staff investigated on the strength of whistleblowers and others, and found that the NRA has engaged in profiting from illegal activities. At a press conference, last Thursday, announcing she was filing a lawsuit to dissolve the organization, James said that a history of law-breaking by the NRA had “contributed to the loss of more than $64 million.”
Trump’s response to a reporter, Thursday, put him squarely on the wrong side of dozens of mothers who marched in Central Brooklyn, Saturday, in support of the AG’s action proclaiming their close-to-home problems with the NRA — in league with mothers of gunshot victims all across the United States.

Their collective thought: Tish was not only doing the right thing, she was fulfilling a promise. In 2016, Public Advocate James during her run for the highest law enforcement seat in New York State, vowed to go after individuals and groups whose organizations she says get away with murder, year end and year out. She also called the NRA “a terrorist organization.

Millions of dollars diverted to
“Big Guns” personal use
According to her press release of last week, James is charging the NRA “with illegal conduct because of their diversion of millions of dollars away from the charitable mission of the organization for personal use by senior leadership.”
She also stated NRA officers awarded “contracts to the financial gain of close associates and family, and appearing to dole out lucrative no-show contracts to former employees in order to buy their silence and continued loyalty.”
The suit charges the NRA as a whole specifically, and cites Executive Vice-President Wayne LaPierre, former Treasurer and Chief Financial Officer (CFO) Wilson “Woody” Phillips, former Chief of Staff and the Executive Director of General Operations Joshua Powell, and Corporate Secretary and General Counsel John Frazer, “with failing to manage the NRA’s funds and failing to follow numerous state and federal laws, contributing to the (NRA’s loss) of more than $64 million in just three years.”
LaPierre, Phillips, Powell and Frazer “overrode and evaded internal controls to allow themselves, their families, favored board members, employees, and vendors to benefit through reimbursed expenses, related party transactions, excess compensation, side deals, and waste of charitable assets without regard to the NRA’s best interests.”

Failed to fulfill fiduciary duty
In the complaint, Attorney General James lays out dozens of examples where the four individual defendants failed to fulfill their fiduciary duty to the NRA and used millions upon millions from NRA reserves for personal use, including trips for them and their families to the Bahamas and Africa for all-expense paid safaris (the latter gifted by an NRA vendor) private jets, expensive meals, and other private travel and transportation, including booking of luxury black-car services.
In addition to shutting the NRA’s doors, Attorney General James seeks to recoup millions in lost assets and to stop the four individual defendants from serving on the board of any not-for-profit charitable organization in the state of New York again.
“The NRA’s influence has been so powerful that the organization went unchecked for decades while top executives funneled millions into their own pockets,” said Attorney General James. “The NRA is fraught with fraud and abuse, which is why, today, we seek to dissolve the NRA, because no organization is above the law.”
Since 1871, the NRA has operated as a New York-registered 501(c)(4) not-for-profit, charitable corporation. Under state law not-for-profit, charitable corporations are required to register and file annual financial reports with the Charities Bureau in the Office of the Attorney General (OAG). The assets are required to be used in a way that serves the interests of NRA membership and that advance the organization’s charitable mission.

Fostered Culture of Noncompliance
However, according to the AG’s press release, “the NRA is alleged to have fostered a culture of noncompliance and disregard for internal controls that led to the waste and loss of millions in assets and contributed to the NRA reaching its current deteriorated financial state.
“The NRA’s internal policies were repeatedly not followed and were even blatantly ignored by senior leaders.” Also, the NRA board’s audit committee was negligent in its duty to ensure appropriate, competent, and judicious stewardship of assets by NRA leadership.”
“Specifically, the committee failed to assure standard fiscal controls, failed to respond adequately to whistleblowers, affirmatively took steps to conceal the nature and scope of whistleblower concerns from external auditors, and failed to review potential conflicts of interest for employees.”
The complaint lays out numerous other instances in which LaPierre, Phillips, Powell, Frazer, and other executives and board members at the NRA abused their power and illegally diverted or facilitated the diversion of tens of millions of dollars from the NRA.
Ackerman McQueen was paid more than $70 million in just 2017 and 2018 for “public relations and advertising” services and for “out-of-pocket expenditures” that really went to entertainment and travel incurred by NRA executives and associates without scrutiny from within the organization, including millions for private planes, luxury hotels, memberships to private clubs, special events, fancy meals, and even personal hair and makeup services for LaPierre’s wife.

NRA Audit Committee’s Failure to Audit
Under New York law, the NRA’s audit committee is responsible for overseeing the accounting and financial reporting processes of the organization and the audit of its financial statements, but the culture of noncompliance and disregard for the internal controls is evident within the audit committee. The committee failed to serve as an independent check on certain staff members and the NRA as a whole, and basically served as a rubber stamp for the organization’s illicit behavior, when it did review finances.
As an example, in 2019 and 2020, the audit committee purportedly approved, retroactively, many other existing NRA contracts, some of which dated back 15 years.
The audit committee’s chair testified during a deposition with the OAG that he had no knowledge of New York law governing audit committees, whistleblowers, or conflicts of interest, and that he could not recall the last time he had seen the audit committee charter that specifically states the audit committee “overs[ees] the integrity of financial information” at the NRA. In fact, the committee chair testified that, in his view and contrary to the charter, the audit committee had no role in oversight of internal controls and that “there is no internal auditing” within the NRA and there hadn’t been one in the whole 19 years he served on the NRA board.
Unsurprisingly, during numerous occasions, the audit committee failed to respond adequately to whistleblowers, failed to appropriately review and approve related-party transactions and conflicts of interest, and failed to adequately oversee external auditors.

AG James’ Proposed Resolution: Dissolution
As a result of all the allegations mentioned above, Attorney General James seeks to dissolve the NRA; asks the court to order LaPierre, Phillips, Powell, and Frazer to make full restitution for funds they unlawfully profited and salaries earned while employees; pay penalties; recover illegal and unauthorized payments to the four individuals; remove LaPierre and Frazer from the NRA’s leadership (Phillips and Powell are no longer employed by the NRA); and ensure none of the four individual defendants can ever again serve on the board of a charity in New York.
“Given the breadth and depth of the corruption, the illegality and the brazen attempts to evade the law,” she said, it is necessary for the NRA to shut its doors for good to protect members and donors.

Say what?
The NRA filed its own countersuit against James on Thursday, claiming that the group’s First Amendment rights had been violated.
Phillips, Powell and Frazer did not immediately respond to the lawsuit, which was filed in state court in Manhattan after an 18-month investigation and seeks fines and remuneration. None of the men have been charged with a crime, but James said the suit would be forwarded to the IRS for investigation of potential violations of tax law.
In a statement, LaPierre said James’ investigation is “an affront to democracy and freedom.”
NRA President Carolyn Meadows called the New York complaint a “baseless, premeditated attack on our organization and the Second Amendment freedoms it fights to defend.” She said the organization would “confront it and prevail.”
“This is an unconstitutional, premeditated attack aiming to dismantle and destroy the NRA — the fiercest defender of America’s freedom at the ballot box for decades,” he said. “The NRA is well governed, financially solvent, and committed to good governance. We’re ready for the fight. Bring it on.”
The NRA’s first line of defense is obvious and untrue. In her charging, James has been careful not to infringe on their right to free speech. Her complaint centers simply on how the organization was run, in ways contrary to the laws of New York State. They can say what they want, but they can’t rob the bank while they’re saying it.
Attorney General James began her inquiry into the NRA in February 2019 and now she’s ready to make her case. (BG)