A World in Danger: Past Time to Act
Advertisement 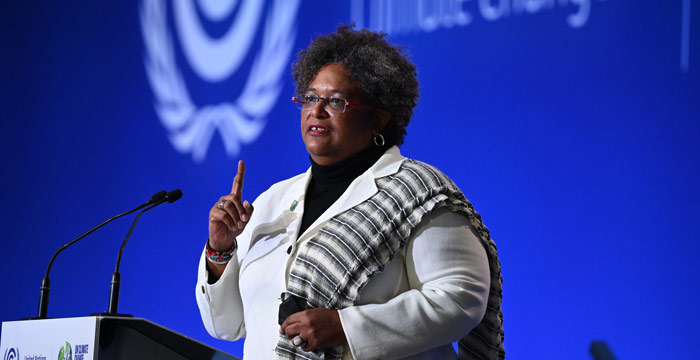 Ms Mottley was given a position of prominence at the opening ceremony of COP26, the climate change summit taking place in Glasgow. The Barbadian leader spoke passionately about the risks Caribbean countries such as hers are facing with the global rise of temperatures.
Addressing world leaders, she urged them to “try harder” when making decisions to stave off climate change.

World leaders are at the COP26 climate change conference in Glasgow, hosted by the UK, amid mounting concerns that countries are not doing enough to limit the emissions of greenhouse gases, which have caused average global temperatures to rise.
Barbados Prime Minister Mia Mottley has delivered a stark warning on the effects of a rise in global temperature on countries like hers at the COP26 climate conference in Glasgow.
Ms Mottley encouraged other countries to commit to fighting climate change, saying that a two degree rise in temperature would be a “death sentence” for island nations, due to rising sea levels and more extreme weather.

Asking for urgent action, she said “we can work with whoever is ready to go, because the train is ready to leave.”