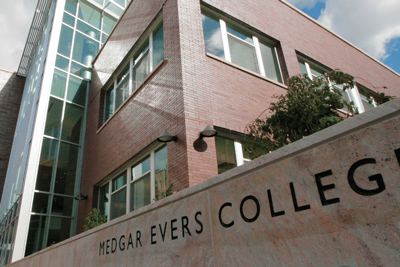 A Letter to the Community from Al Vann

On February 1, 1968, the City University of New York (CUNY) released a statement to the press that they were planning to establish a two-year community college in Bedford Stuyvesant. To most community leaders, and community residents alike, this was the first notice that a college was being planned.
However, the demand for a college to be established in Bedford Stuyvesant had been made, and continuously repeated, for almost a decade before this CUNY announcement. The most prominent organization associated with the community’s demands for a college was the Central Brooklyn Coordinating Council; an umbrella group for many organizations.
This history is important, because it provides a context for understanding the community’s response to the City University’s announcement at that time, and also to appreciate fully the significance of the moment we are in now.

At two heavily advertised and well attended meetings, the Bedford Stuyvesant community created or confirmed: 1) selection of a Steering Committee that was subsequently expanded to include approximately 25 organizations; 2) a mandate that any college to be established in Bedford Stuyvesant must be COMMUNITY CONTROLLED and must be a four-year college that offers baccalaureate degrees; and 3) a notification to the Board of Higher Education of the existence and purpose of the community organization. They also requested that all planning for the proposed college be stopped until dialogue with the community was established. Dialogue between the Board of Higher Education (BHE) and the Central Brooklyn Coordinating Council proceeded and then came to a standstill.

To make a long, but interesting, story short, after a year or more of meetings and negotiations between the CUNY Board of Higher Education’s Presidential Search Committee and the Central Brooklyn Coordinating Council (Negotiating Team) *, The Trustees of the BHE declared an impasse because they disapproved of the candidate that the agreed upon process yielded. Sadly, elected officials, who had not been involved in the negotiations at all, supported the position of the Trustees. Their involvement created division in the Coalition; this enabled the BHE to withdraw from negotiations and renege on all they had previously agreed to. They chose the first President of Medgar Evers College without any participation from the Brooklyn Coordinating Council (Coalition on Educational Needs and Services).
They charted a course for Medgar Evers College (MEC) which would make it nearly impossible for this institution to be successful in meeting the needs of the central Brooklyn community. Nonetheless, because of the perseverance, competence, and dedication of professionals who were drawn to a college named for Medgar Wiley Evers, they were able to “make a way out of no way”. Thousands of men and women who came to MEC as students were given the knowledge, the skills, the career preparation, the confidence to succeed, the affirmation of their culture, and the responsibility to “give back”. This was particularly true during the tenure of Dr. Edison O. Jackson’s presidency.
Fast forward 50 years. The stars seem to be in alignment. On May 1, 2021, Dr. Patricia Ramsey ushers in a new beginning for Medgar Evers College, as she assumes the Presidency on May I, 2020. Dr. Ramsey’s academic and administrative experiences are extraordinary. She is uniquely prepared to lead Medgar Evers College to fulfill its destiny.

While Dr. Ramsey was going through the Search process, Attorney General Letitia James convened the elected officials who represent MEC. Thus unified, they engaged the Chairman of the Board of Higher Education, the Honorable William C. Thompson, Jr., and the Chancellor of CUNY, Dr. Matos Rodriguez in several remote meetings over several months. The “meeting of the minds” between our elected leaders and leaders of the University, led to an expedited search for a president, an early transition from MEC for Dr. Crew, a commitment that Dr. Ramsey would select her own cabinet, assignment of an interim president, and a “transition team” from the University to preside over the transition period. A new beginning! This time, the elected officials are aligned with the community; this time, there is unbridled, learned and dedicated faculty and professional staff that will sound the alarm if the course is altered; this time, both the Chairman and the Chancellor of CUNY have committed to the long term success of Medgar Evers College.

I believe that central Brooklyn can be optimistic, and expect a college that will manifest the values, principles, and standards that represent who the man Medgar W. Evers was. I believe that every Black boy and every Black girl in Brooklyn, and indeed in New York City, will know that there is a college for them that respects who they are, and acknowledges their unlimited abilities. I sense that the founders of MEC, most of whom have joined our ancestors, are beginning to smile. Dr. Myrlie Evers-Williams and family can rest assured, that Medgar’s legacy is being respected and revered. And, our beloved brother, Medgar Wiley Evers, may continue to Rest in Peace.

Brooklyn’s Black community owes a debt of gratitude to the Committee of Concerned Faculty, Staff, and Students of MEC for “Keeping the Faith” and making it possible for MEC to have a New Beginning. You should also give thanks and show support for the following elected officials who facilitated MEC’s New Beginning, and who will be the guardians for the sustained and future growth and development of Medgar Evers College: Assemblywoman Phara Souffrant Forrest, Assemblywoman Diana Richardson, Senator Zellnor Myrie, Councilwoman Laurie Cumbo, Congresswoman Yvette Clarke, Congressman Hakeem Jeffries, and Attorney General Letitia James.