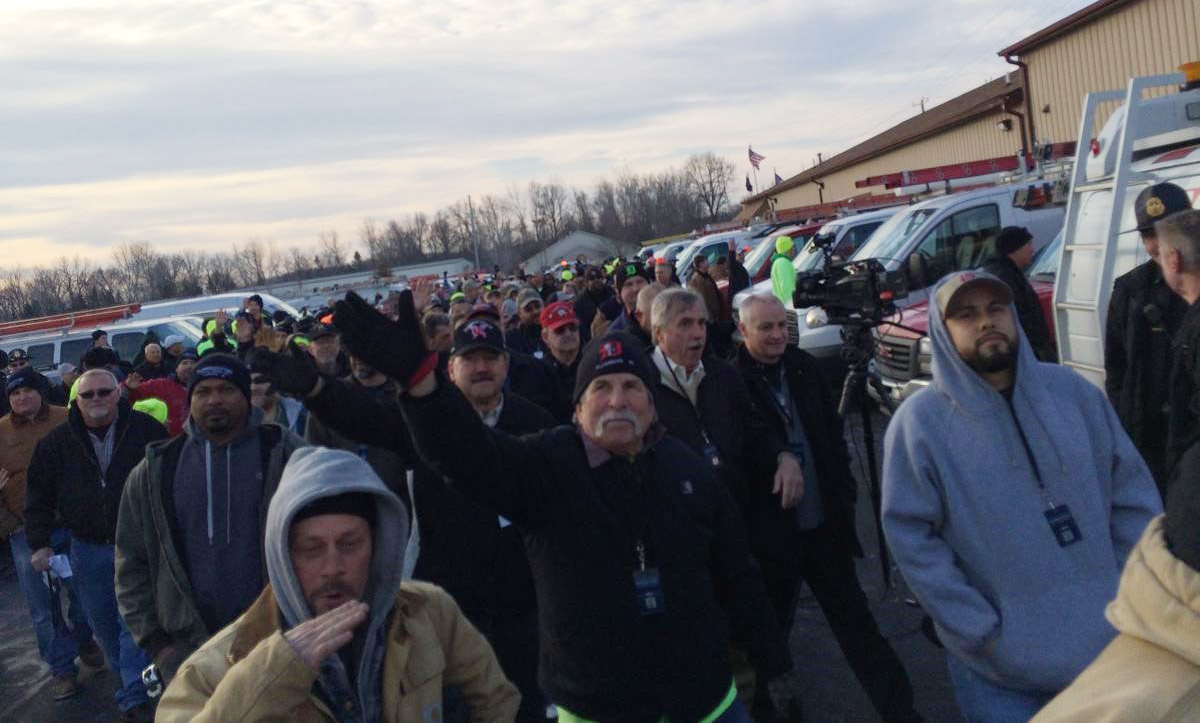 More than 300 union plumbers from cities across Michigan came to Flint recently to volunteer to replace faucets and filters.  Photo: Tracy Samilton

Since October, plumbers with United Association Local 370 in Flint have been volunteering to install filters and faucets to get lead out of people’s tap water.
On Saturday, the local guys got some help – from a small army of more than 300 plumbers driving in from Lansing, Detroit, Saginaw and other cities across Michigan.
They get a rousing, union-pride welcome from Local 370 official Harold Harrington.
“We did not cause this American tragedy in Flint,” Harrington tells the group, “but we certainly can help correct the damage that has been done!”
Outside the union hall, Genesee County sheriff deputies direct traffic to make sure all the trucks and vans can get in and out safely.
Call 911, the plumbers are told, if they feel unsafe in a neighborhood or at a particular home, and a sheriff’s deputy will arrive to escort them into the home so they get the work done.
Everyone is paired up, given instructions and a list of addresses.
Jordan Belill and his cousin Tyler get their list, grab armloads of donated faucets, filters and test kits, and head out to the home of Berdie Johnson.
The faucets were donated by Plumbing Manufacturers, International, which represents major companies like Moen, Brasscraft, Speakman, Delta and American Standard. Hodges Supply of Flint also kicked in items.
Johnson’s home is like practically every house in Flint; she has cases of bottled water stacked in her spotless kitchen.
She says in a way, it was lucky her water didn’t look right two years ago. That was when the city switched from Detroit water to Flint River water in order to save money.
“I was buying the water before we even realized they said all the lead was in it,” says Johnson, “because the water was brown. Looked like Kool-Aid!”
Jordan Belill finds out Johnson needs a specific kind of faucet that he doesn’t have. She’ll be put on a list for a follow-up visit. In the meantime, he installs a filter in the laundry room.
“See how that light’s blinking green?” Belill explains.  “That tells you that your cartridge is good. It would turn yellow when it’s telling you it’s getting close to being used up and would blink red when it’s time to change it. ”

Next stop is the home of Loyce Driskell. This time the faucet replacement is successful. Driskell laughs, because they’re replacing a brand-new custom faucet with one exactly like the one she just got rid of.
Then she turns serious. She and her family only stopped drinking the water three months ago.
“We think if we’ve been drinking this water for a couple years – and that’s how long it’s existed – that these efforts, at this point, I mean the damage is almost done,” she says grimly.
That may or may not be true for her family. Recent tests appear to show the water in many homes is under the federal action level for lead.
But a few homes have so much lead that filters may not work.
The plumbers visit 1,100 homes by the end of the day. Local 370 will keep on volunteering.
Money, too, is starting to come in, including $28 million from the State of Michigan.
Officials with the agencies responsible for causing the problem in the first place now say they are here for the long haul, and will not abandon Flint until everything possible has been done to repair the damage.  (Follow Tracy Samilton @ http://michiganradio.org/)

Mary Ward: A Life on Hold