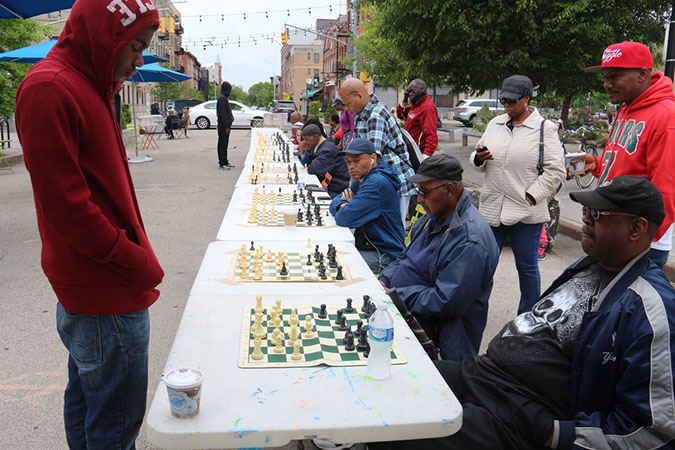 13 Chessboards were played simultaneously by Omar Cunningham at the Putnam Triangle in Brooklyn, located at Fulton St. & Grand Ave. Omar is a 14-year-old high school student, chess prodigy and chess expert. He began playing chess 3 years ago and became an Expert (one level below Master) in April 2015. He had his humble beginnings at a local library and was immediately (within a week) identified by a chess master as someone with promise. He then transferred to the Brooklyn Chess School (I.S. 318) where he went on to assist his school with winning the Grade National and City Championships for 2 straight years. He plays chess around the city and now plays with an online team. We expect to see great things from this young man in the chess world.

For the Chess Players

This is the ending excerpt of the analysis of, and his comments on, his game with young Mr. Cunningham.  [White “Omar Cunningham”], [Black “Warren Williams”]

Omar Cunningham at the board of Warren Williams, II

At this point, I saw I had an unstoppable 3- or 2-move Mate on his opened d5 to h1 diagonal white squares as stated. With the help of my three-time Tempo pushed H pawn, in Mate position on h3, I had already saw his two-move unstoppable Mate, but he didn’t think I did or wasn’t sure. Knowing this, I didn’t want him to gain Tempo by not taking my Rook on d8 while changing his move to #27. Nf4 now staring down the H3 pawn for a wishful #28.Nxh3 Nxh3 OR #27. Nc5 #28. Qd5+ then Re4 to hold his Knight out post-position while blocking my diagonal with his Rook. Before he approached my table, I decided to quietly think out loud to myself for him just enough to hear my  (Verbal Gambit) to ensure the continuation of my diagonal line to a Mate. Once he approached and saw my move Qd6, he had a second to decide while I had only a split-second to help him with that decision, then I considered taking his poisoned/ Gambit Knight.

If I took Nxd8, it would have been an excellent move, provided I didn’t have a Mate option against him.

He then resigned with a handshake.

“They don’t call me Dr. Gambit for nothing! Also use your GAMBIT to gain a TEMPO attack. I am the only one that beat OMAR because, on all the other 12 boards, every chess player played either Defensive Fienchetto Games, double Fienchetto Games, no Castling with space to Castle on either King or Queen side. They Castled with a Fort Knox Fortress around their King and either still lost, had a draw or didn’t finish their game. Me, on the other hand, opened up with THE FRENCH DEFENSE, then attacked him in the corner as he attacked me in the corner also.

Young expert Omar Cunningham achieved that level (USCF) officially within only 3 years at the age of 15 now. He played an excellent and extremely tricky game. I have much respect for him and his game. An African-American teen, soon to be a Master, then Grandmaster in no time. He played 12 adults and 1 youth totaling 13 chess players in a Simul (Simultaneously), in the rain at one point, he played us all for over 4 hours. I was the only one that had a Mate position on him, we shook hands and I was honored to have played a young expert of 3 years. Opposed to my correspondence and Internet Expert Rating that took me ten years, I received an Achievement Trophy for winning in the Simul. Others received trophies for Best Player. A young girl at age 11, I believe, did an excellent job and also for her age. Omar actually reminded me of my son, I’m sure his parents, family and true friends are proud of him, as I am. Thanks to Bob Ali for inviting me to your well-organized event. Also, great thanks to my lovely sister and niece that were there to support me. ”