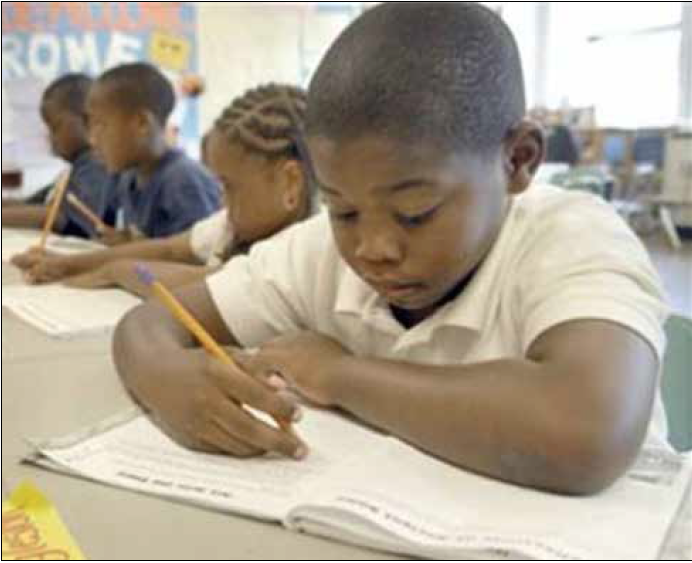 What is wrong with Black people, particularly Black men? Why can’t they get it together?

These questions and others are answered by a new report, “Race and Economic Opportunity in the United States, An Intergenerational Perspective,” that shows how racism permeates the culture like an evil thing intent on the destruction of Black men from their very beginning as boys. Confirming in all aspects the work contention for Jawanza Kunjufu in his book, “Countering the Conspiracy to Destroy Black Boys.” (see sidebar) The report shows that it does not matter where you started, life is different for Black boys. For them, class does not matter. Race and gender guide their destiny, and their destiny is to be poor.

As reported in the New York Times on March 19, “The study, based on anonymous earnings and demographic data for virtually all Americans now in their late 30s, debunks a number of other widely held hypotheses about income inequality. Gaps persisted even when Black and white boys grew up in families with the same income, similar family structures, similar education levels and even similar levels of accumulated wealth.”

Difference in income distribution for Black and White Men

White boys born poor rise to middle class, upper middle class and rich at a greater rate than Black boys born in poor, most of whom will remain poor as adults.

Why are there tables filled with Black women in restaurants but very few with Black men?

The economic wage gap is not true for Black girls who were found to achieve at the same level as white girls, rising at the same economic rate.

After examining the tendency toward poverty for Black boys under all circumstances, the Times said the report concluded, “If this inequality can’t be explained by individual or household traits, much of what matters probably lies outside the home — in surrounding neighborhoods, in the economy and in a society that views Black boys differently from white boys, and even from Black girls.”

The finding about Black boys that, “As early as preschool, they are more likely to be disciplined in school,” rings true for this writer, having been left back a year and suspended as well by the fourth grade at PS 138 in Crown Heights.

It takes a Village

Africans spoke truth in the Igbo proverb, “It takes a whole village to raise a child,” and it is reiterated by the results of the study showing that for Black boys in particular, the presence of fathers is very important. While father presence did not correlate with Black girls, “Black father presence at the neighborhood level predicts Black boys’ outcomes, irrespective of whether their own father is present or not, suggesting that what matters is not parental marital status itself, but rather community-level factors associated with the presence of fathers, such as role-model effects or changes in social norms.”

Even when a Black boy is born rich, he can still go to jail.

And the report shows that the boxing legend Joe Louis was right when he said of an opponent, “He can run but he can’t hide,” because there is no moving away from the racist assault for Black boys.   It says, “The worst places for poor white children are almost all better than the best places for poor Black children.”

There are other questions raised by the report such as policy that does not have at its core an understanding of the effect on Black boys. For example, is the co-location of impressionable middle-schoolers with alternative high-schoolers in programs up to age 21 really a good idea? Perhaps a middle school with all-Black teachers and administrators is the best way to go.

Like back in the time of coming out of slavery and in the near-century after when Black teachers had little to work with but their passion and belief in the children turned out successive Great Generations of African-Americans who transformed the nation. Using what they had learned first by candlelight and with handed-down books, these students fought back against all the power of the nation’s racist nature and paved the way for oppressed others who now benefit most from the work of those student’s and the adults they became.