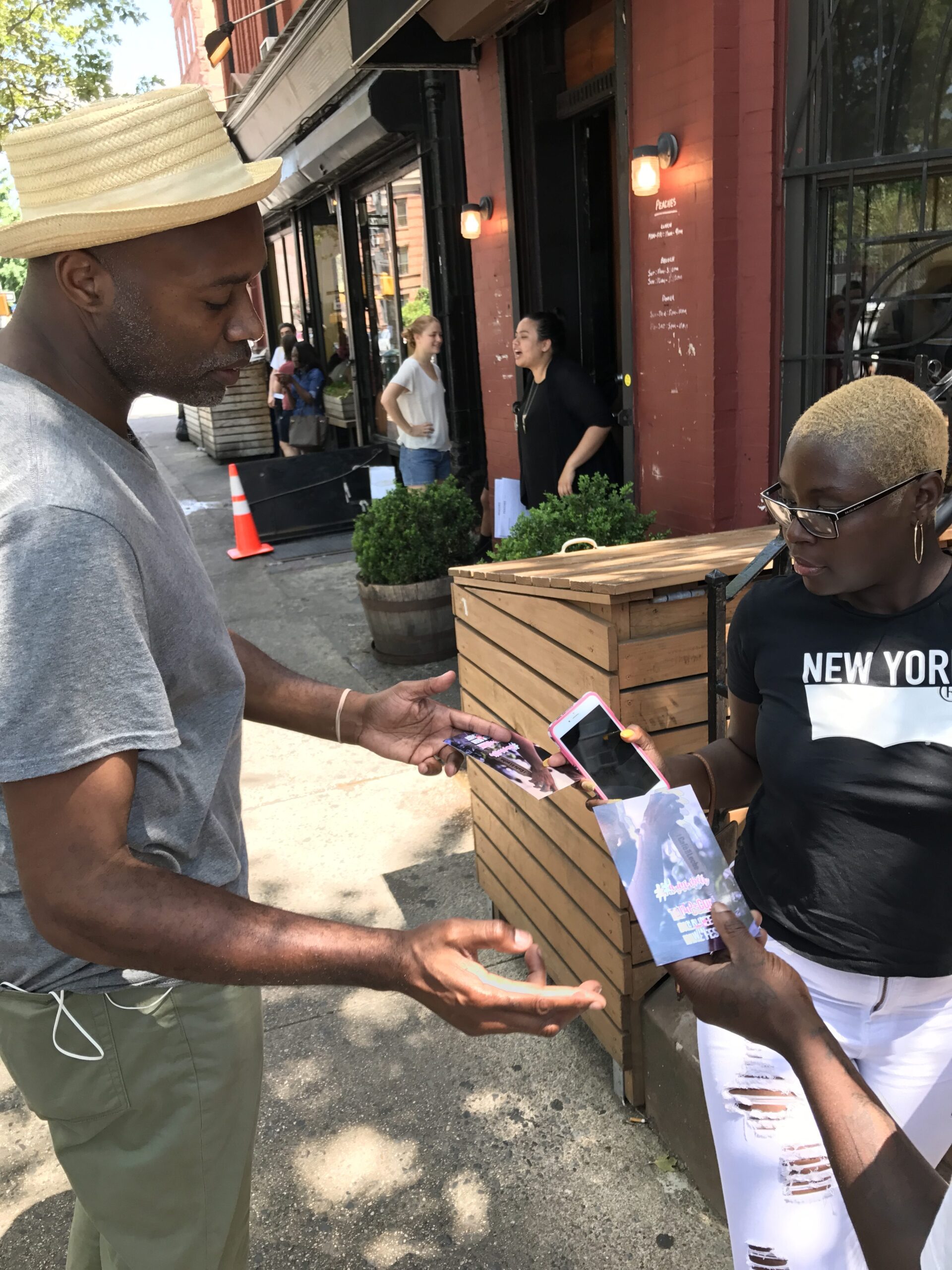 I told Tai Allen that I’d meet him at Khem’s Jerk Spot, but it doesn’t open until 2pm on Sundays and our meeting was for noon. Still, we convened in front of Khem’s, a new restaurant located on Lewis Avenue in the heart of Bed-Stuy, to figure out where we are going to grab a bite to eat. Peaches, which borders Khem’s to the north, was in full brunch bloom, patrons of various ethnicities huddled in groups patiently awaiting the 30-45-minute wait time for a table. Two blocks up, Beso’s had its French windows pushed open, offering customers sitting at the front the feel of outdoor dining. A few doors up from Beso’s, Therapy Wine Bar had a bustling scene as well. We chose Emeline’s at the corner of Macon and Lewis, an establishment named after a woman who was born in the 1800’s in Weeksville, which was America’s second-largest settlement of free Blacks before the Civil War, located in what is now known as Crown Heights. This restaurant is owned by her grandchildren.

Lewis Avenue has blossomed into a well-developed thoroughfare of restaurants and boutiques, a great number of them, including those mentioned above, are owned and operated by Blacks (Peaches is owned by B&C Restaurant Group, which is comprised of two partners, one of which is Black). However, the neighborhood has indeed changed from decades ago when brownstones were abandoned and businesses were scarce. I know this as a fact, because when I was a kid my grandfather owned a numbers spot in a storefront that sat on the same block that Beso’s and Therapy Wine Bar are on. I used to sit at the counter eating jolly ranchers while the community would come in to play their bo-litas. The numbers spots and the bodegas, both decidedly old Brooklyn motifs, have been pushed out to make way for restaurants and organic markets. But it isn’t just outsiders coming in and developing the community.

Tai Allen is one of the producers of Tap and Cork, an annual beer and wine festival in its fifth year of operation. It is Bed-Stuy’s first major beer and wine festival born inside of The Lab, a former event space on Fulton and Tompkins in 2013. Tai and his team moved the event to Restoration Plaza in 2014, and it’s been there ever since. Over 2,500 people assemble every August to sample craft beer and wine from dozens of vendors, most of them from the community. Tai figures that the demographic for Tap and Cork is currently 70/30 women to men, and 60/40 Black to white, numbers that speak to a changing neighborhood. Tai is old Brooklyn, a poet, singer and author, a consummate artist always working to mesh community and culture in ways that reveal the beauty in both. So, for Tap and Cork, he approaches restaurants, lounges, wine shops and beer gardens in the community to present them with the opportunity to be a vendor. His marketing team and even the DJ’s he uses are all from the community. The event grows every year – more vendors, more patrons, more visibility. And as it grows, it becomes part of the overall development of the community, this transformation into New Brooklyn, an idealized place where young people all across the world want to move.

As demand increases, supply decreases and prices rise. When prices rise, those without the economic resources to stay afloat become displaced. Anyone who’s taken an economics class understands this concept. But when it plays out in neighborhoods these concepts leave a sour feeling in the stomachs of those who’ve watched it play out, and blame becomes an easier way to explain things.

While I scoff down my home fries, Tai explains how he sees the development of culture and community play out in Bed Stuy. “What we are doing is a direct reflection of the people who were already here. People who were here already want things like Tap and Cork in their community. Then it works, and it attracts someone else from somewhere else, and when they come in then it ultimately pushes out those who wanted it in the first place.” I swallowed my brunch and asked the $64,000 question. What can we do to help the displacement? His response speaks to a strategy of inclusion. “With everything that I do, I make sure that businesses in my community are able to eat from it. We can’t help everybody, but we can empower the businesses.”

The fourth principle of the Nguzo Saba is Ujamaa, or Cooperative Economics. The principle touches on building and maintaining our own stores, shops and businesses, and profiting from them together. The one thing that will keep our communities from drowning in the seas of hyperconsumerism is the continued commitment to supporting small businesses, as well as a continued commitment from developers and event organizers like Tai Allen to offer up opportunities for revenue and visibility to these same businesses so that as new neighbors settle in, their social landscape includes patronage of the very shops and businesses that represent those who have already succeeded in developing Central Brooklyn. Let’s face it, businesses like corner stores, delis, pizza shops, laundromats and diners are the backbone of developing any neighborhood. They provide a service, they provide jobs to the neighborhood residents and if the owners are from that community then the money stays in the community. The biggest danger to losing the identity of Brooklyn isn’t the new neighbors. Most of them will admit freely that it was the identity of Brooklyn that drew them in. The biggest danger to losing the identity of Brooklyn is hyperconsumerism, allowing big businesses to usurp economic opportunities from small businesses. So, eat at Emeline’s. Attend Tap and Cork on August 12th at Restoration Plaza. Support the community by supporting the businesses therein. Make sure that your voice is helping to shape the narrative of New Brooklyn.

We Are Inspo: Reintroducing Collective Work and Responsibility to a New Generation

As United Bed-Stuy Community Presses for Justice in Double Homicide, Detectives are Receiving Influx of Tips