THE MOVEMENT TO OPPOSE TRUMP
Advertisement 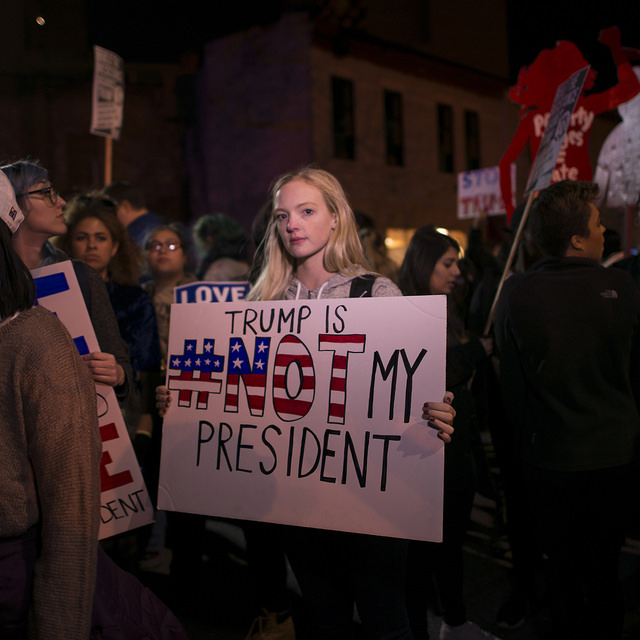 VOLUME 7 of The Movement to Oppose Trump newsletter is published below in its entirety.  Action steps at the links.

THE MOVEMENT TO OPPOSE TRUMP, VOLUME 7

I hope everyone enjoyed the holiday weekend wherever you were able to celebrate it. I bring you this week’s email from a small beach town on the Colombian coast. While I am trying to enjoy a short vacation with the family – Mateo Ali is loving the fresh coconut water and arepas every morning – our work cannot and does not stop. If Trump thinks that for one moment, we close our eyes, he will take advantage of that moment quicker than he ran scams on college students. So while I might have jumped in the ocean this morning, I spent much of the day making sure to get this email together, so our movement stays on point.

You know the drill…let’s get to work.

Please feel free to forward this message to your friends and encourage them to join – here is the subscription link!

Save Obamacare: When the new Congress returns next week, the first thing they say they are going to do is repeal the Affordable Care Act. One of President Obama’s greatest accomplishments, access to quality healthcare has never been better than it is today. During this year’s sign-up period, 6.4 million people enrolled in the healthcare exchange, an increase of 400,000 during the same period last year. The Center for American Progress is collecting the stories of those who would be personally impacted by repeal to make sure they are a part of the conversation across the country in the upcoming fight. Share your story here. (h/t re:act)

Calling All Teachers: A woman named Melissa Sher is developing a support program for the Southern Poverty Law Center. She is asking volunteers to help the center write up and compile stories of “compassion, respect, inclusion, and acceptance” that have taken place in classrooms in response to the rise in aggression and hate speech we have seen since the election (and was a huge problem before the election obviously). Her email is volunteerstoryproject@gmail.com if you want to be involved and you can check out her Facebook post here. (h/t ActionNow)

The Cabinet: While the President is not inaugurated until January 20th, the new Congress returns to work on January 3rd. The Senate will begin confirmation hearings soon thereafter for the cabinet appointees. From my good friends over at re:act, here is an overview of some of the crucial picks by Trump that must be opposed.

Tillerson for State:
Update: “Senate Democrats plan to run Trump playbook against Tillerson”
Action: Contact your Senator to ask for a Secretary of State without ties to Putin.
Mnuchin for Treasury:
Action: See if your Senator is a pivotal vote on the Finance Committee, contact them to discuss these points.
Bannon and Flynn:
Update: Trump skipping intelligence briefings places additional reliance on his immediate advisors. That they are meeting with far-right parties founded by ex-Nazis isn’t encouraging.
Action: Call your Members of Congress to ask them to publicly call on Trump to rescind these appointments.
Sessions for Attorney General:
Update: “Lobbying push in full swing to confirm Sessions”
Action: Read “How to Protest Jeff Sessions Being Attorney General Right Now”
Pruitt for EPA:
Action: Tell your senator that Scott Pruitt is a dangerous nominee.
Join An Action Group: The creator of “House of Cards,” Beau Willimon is an amazing man. He formed the ACTION GROUP NETWORK in response to the election on November 8th. The response nationwide has been overwhelming–people from dozens of states and cities who want to get active right away. Sign up for a group in a local community near you! An action group is a group of 10-50 people organized by location, issue or profession who commit to working together toward concrete actions important to them. The groups themselves will decide what actions they work on. Examples would be things like: working on a local election, fundraising for a larger organization, letter and phone-banking campaigns, and so on.

Support Michael Blake For DNC Vice-Chair: My best friend, New York State Assemblyman Michael Blake (South Bronx), is running for DNC Vice-Chair. If we want new leadership in our party, Michael should definitely be part of that team. As President Obama’s first African-American Outreach Director during the first three years of his administration, Michael left working for the President after seven years and returned to his native home of the South Bronx and was elected to the New York State Assembly. I don’t offer endorsements easily, but Michael is the real deal and deserves our support. Check out his campaign for DNC Vice-Chair and let’s support my man!

D.C. Bully Busters: Some sixth-grade girls in Seattle have started an anti-bulllying campaign in an attempt to do something positive with their frustration over politicians’ bad behavior. Now that’s something to feel good about. One of their parents reached out to me and I promised him that if he could get in the local paper, I would spread he word. He did it! Check out the article in The Seattle Times and start a chapter in your city, town or rural community.

Attend + Donate To The Women’s March: Over 155,000 people have already committed to joining this historic march on January 21st in Washington, DC. The permit has been approved, and the march will take place on Independence and 3rd Street SW. This is an INCLUSIVE march, is FREE to join and EVERYONE who supports women’s rights are welcome. Sign up! And if you cannot attend, please consider making a donation!

Elizabeth Warren Needs You: Donald Trump has picked Steve Mnuchin for Secretary of the Treasury. Like Trump, Mnuchin has zero government experience and is aka “the Foreclosure King.” In 2009, Mnuchin sought to benefit from the housing bust. He assembled a group of investors to buy IndyMac, a failed bank; renamed the bank OneWest Bank; ran it for six years; and then recently sold it for a profit of $1.5 billion. Housing advocates have described how OneWest’s aggressive (and sometimes illegal) practice of buying distressed mortgages caused tens of thousands to lose their homes. The Democrats need our help in writing a very different kind of story–the tragic but true story of Americans who lost their homes because of mortgage villains. Senator Warren wants you to share your story if you were affected by Mnuchin’s predatory practice. Click here to submit. (h/t Wall of Us)

Follow Lauren Duca: I had the great pleasure of joining Lauren Duca, a writer for Teen Vogue, on a long segment on MSNBC on Thursday night. While in the green room we made small talk, not really having any idea of how big of a super-star she really is. Once we got on set she was incredible. The following night she made national news by knocking out Tucker Carson on his show. Check out the amazing exchange with Tucker and definitely follow this rising star on twitter.

Urge The Rockettes Not To Perform: In a perfect metaphor for how Trump views women, a group of female performers are being coerced (if not, forced) to perform in front of him, while being bullied by their boss to show up at a presidential inauguration whether they like it or not. While the Rockettes’ boss has backed away from the “forcing them to perform” part, it is still unclear what kind of pressure is being put on them. Five Minute Resistance has led the campaign to urge the Rockettes not to perform. Join their campaign here.

Follow David Fahrenthold: Washington Post reporter, David Fahrenthold, deserves a Pulitzer Prize for his investigative journalism throughout the Trump campaign. At first David was writing generically about Trump’s campaign, but then began to dive deep into the Donald J. Trump Foundation and provided some of the best journalism of the election. While Donald has vowed to close his Foundation, the fight is not over, as NYS Attorney General Eric Schneiderman is suing the Foundation, and during an active lawsuit, a foundation cannot be closed. So, David’s investigation continues. Make sure to follow him on twitter.

Indivisible: A Practical Guide for Resisting the Trump Agenda: A group of former congressional staffers have put together a phenomenal document that breaks down the best practices for making Congress listen. This document is a step-by-step guide for individuals, groups, and organizations looking to replicate the Tea Party’s success in getting Congress to listen to a small, vocal, dedicated group of constituents. The guide is intended to be equally useful for stiffening Democratic spines and weakening pro-Trump Republican resolve. Check it out here.

Giving Season: As we are in the holiday season, there are many organizations that could still use our financial support. Here are a few:

Good Read: “Welcome to The Resistance” by George Takei

A Song For The Movement: “Be Free” Live by J. Cole

There are 23 days until Donald Trump become the President of the United States. 23 days. Now is the time to build a bold, powerful movement of opposition.

Please spread the word about THE MOVEMENT TO OPPOSE TRUMP
Here is the subscription link for your friends to sign up.
Be safe, let’s stay focused and let’s get to work.

This is how tyranny begins: Why will President Donald Trump continue to hold rallies?