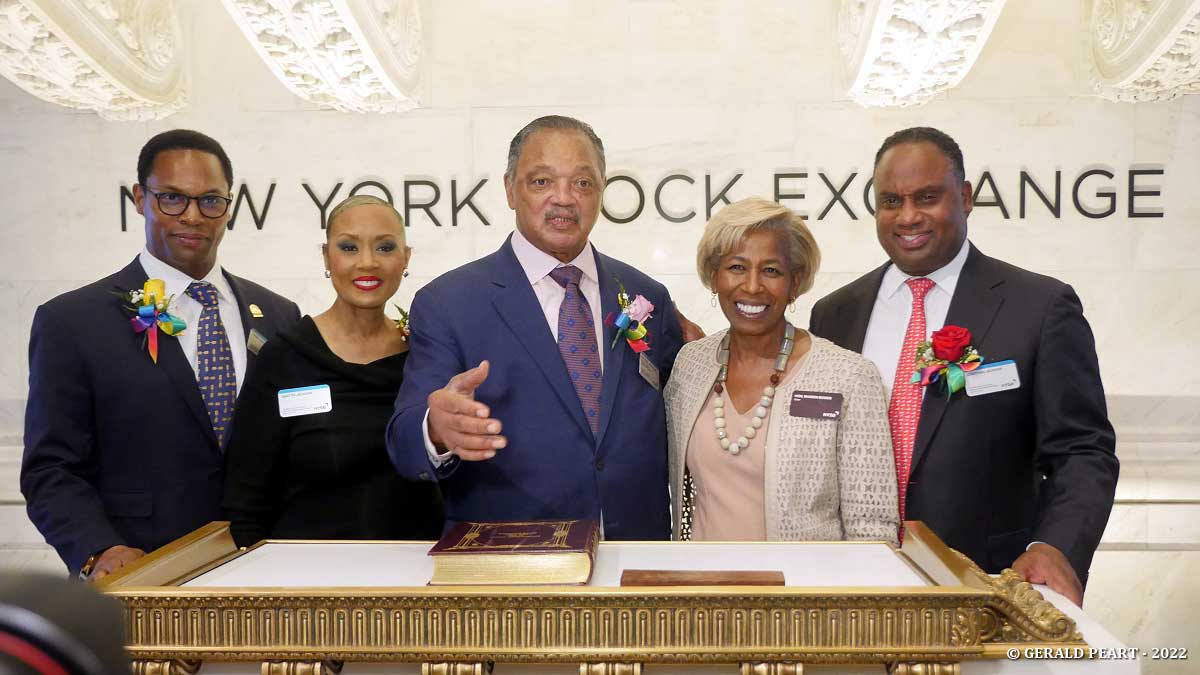 By Fern E. Gillespie
Rev. Jesse Jackson ended the 25th Annual Rainbow PUSH Wall Street Project Economic Summit as he did 25 years ago, at the New York Stock Exchange (NYSE) ringing the Closing Bell. Except, this year, Wall Street history was made. He had help ringing the bell –Sharon Bowen, a finance and securities lawyer, who is the board chair of the New York Stock Exchange (NYSE) and the first Black woman to gain that prominent role.

Since 2017, Bowen has been a member of the board of directors of Intercontinental Exchange, Inc., NYSE’s parent company. Previously, she made history as the first African American to serve as the Commissioner of the U.S. Commodity Futures Trading Commission. In 2010, Bowen was handpicked by former President Barack Obama to serve as vice-chair and acting chair of the Securities Investor Protection Corporation. Last year, Bowen was appointed to the board of directors of Akamai Technologies, Inc. Born in Chesapeake, Virginia, she holds a bachelor’s degree in economics from the University of Virginia and a MBA and law degree from Northwestern University.

“The appointment of Sharon Bowen as chair of the New York Stock Exchange is an indication that the wind is certainly blowing towards equality. We are so proud of her, in that, she eloquently carries the burden of our past, while augmenting our future, knowing better days are ahead,” John A. Graves, Chairman, Citizenship Education Fund and Automotive Project told Our Time Press. “As she greeted us this week on the NYSE floor, our pride was joyfully beaming. Moreover, when Rev. Jackson rung the Closing Bell, for the first time in history, an African American chair was at his side. What a seminal moment!”

At the event, Mayor Eric Adams stated his willingness for the New York City to do business with African American financial firms.  “I have said it time and time again: social justice and the prosperity of New York City go hand in hand. We cannot have one without the other,” said Mayor Adams. “My administration knows, we can, and we must do both.”

The Wall Street Project challenges corporate America to end the multi-billion-dollar trade deficit with minority vendors and consumers while working to ensure equal opportunities for culturally diverse employees, entrepreneurs and consumers.
“We have to teach our children about the Bulls and Bears as it’s essential for their success,” stated Rev. Jackson at the conference. “We must learn the system of capitalism, capital, industry, technology, and deal flow.”