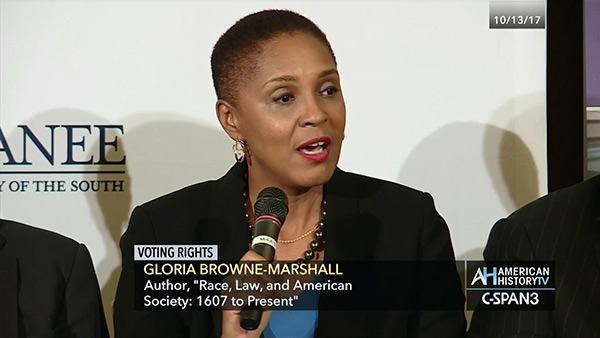 The following talk with Prof. Gloria J. Browne-Marshall, professor, Constitutional Law at John Jay College, and publisher David Mark Greaves, is the second in an Our Time Press series of ongoing interviews and conversations on the state of our times. It is inspired in part by a book Prof. Browne-Marshall is writing entitled: My Sankofa Year. The interview took place January 11, 2020.

Our Time Press publisher David Greaves: Let’s take a look at the upcoming Presidential election: in the democratic field, it’s an all-white contingent and billionaires on stage. How do we keep the passion going for Black voters in the presidential election when there’s no Black candidates?

Professor Gloria Browne-Marshall: There have been no Black candidates for the majority of the elections. So, this is not new. There were no Black candidates as well as no one really speaking to the African American issues for the majority of American history. Frederick Douglass had his name on the Ballot in the 1870s and actually received a few delegates. So, that’s why I said we’ve been in the game for a long time.
I wish we better understood our history and better understood our power. What we should be asking these candidates is, what’s your position on Black empowerment? What is your position on African- American power? It’s going to be on us to embrace, and understand, that we have power and to spread the word to our community that we have power. Voting is one way to exercise that power. Is it perfect? No. But the vote is a voice and one way to exercise the power, not just on the national level but on the local and state levels, is to vote. Once we exercise that power to vote, we understand why they move the locations of places where we get our photo ID. Within days after the US Supreme Court gutted the Voting Rights Act, all these laws pop up on voter suppression. I mean, they’ve been after our vote for hundreds of years. We had our first elected African American official in the 1700’s, NOT the 1800’s.

OTP: I didn’t know that.

GBM: Yes! Wentworth Cheswell, grandson of a former enslaved African, was elected to public office as the Town Constable of Newmarket, New Hampshire in 1768. If we don’t know our history and we think everything is just today, our plans are not forward-looking.
By 2045, this country will be majority people of color. I don’t think a lot of European- American conservatives are willing, able, or can even think through being in a country in which they are not the majority or at least in power.

OTP: Well, that seems to be the thrust of Mitch McConnell’s rush to put as many Federal judges in the judiciary as possible. These folks will be there til… say 2045-2050, deciding on voting rights, and all other kinds of rights too.

OTP: What can we do with that?

GBM: There’s nothing this country has not done to us. I don’t say that with any type of vengeant spirit. I’m saying that based on history and we know this history. It’s very curious to me how we can know all of these things, even most of them that have happened to us involving the cruelty of slavery, Jim Crow lynching, you know the murder of Black Panthers and murder of any activist. The murder of Martin Luther King Jr. And yet we won’t do basic things to protect ourselves like learn. I’m not even talking about rising up with a weapon. I’m talking about understanding if this is your opposition, when you start to see mobilization don’t think it as MIGHT be occurring. Perhaps, it is. History has shown us that the number of times we’ve been able to rise up and do anything that is progressive for Black people has been met with a backlash, and the reason we’re sitting in the middle of this very conservative stance that’s anti-African American, anti-immigrant, anti-people of color is we had a Black president for 2 terms.

OTP: The reaction to Obama, the backlash to Obama, drove them crazy.

GBM: When he was in office, they lost their identity because they believe that they are superior to black people, in many ways. Even white Liberals. I have encountered this.
The reality of them saying they believe in equality when it actually happens because you can’t have people trained in extensive superiority for hundreds of years and then, when they’re actually faced with the reality of being equal to someone they feel they’re superior to for so long, there is an adjustment.
When you bring in a change like this, different than how they’ve been raised for generations, then you’re going to have backlash, especially some people in power who feel this will erode their power. They feel they’re the only group that knows how to run this country. So, if you look at it from a very reasonable standpoint, even though racism is quite unreasonable then you realize what you’re in.

Given that situation, what are the tools they have. The vote is one. How can that tool be used to not only protect myself, my family, my community but also used to make progress on my side, since they want to use that tool to make progress on their side? That way you can see it very clearly for what it is and then your question goes to, what should we be doing? One of the things we should be doing around the vote is to organize our community in more than just groups. We have to organize people and go out into their communities and tell them the same things we’re talking about, how your vote is power. How your vote is not just a national vote but it’s a vote on all these different levels and how you need to register to vote. In our state, people who are formally convicted of felonies can vote.
People who have ties to the Federal government, churches, community groups, need to be expressing their right to vote beyond their own government agency, community group, or whatever. They need to be making sure that people understand the power of the vote.

OTP: In 1972, William Greaves Productions documented one of the first black political conventions (Nationtime Gary). It was a national organizing effort brought together by Imamu Amiri Baraka in Gary, Ind. Do you see any chance of another nationally organized effort by black folks?

GBM: I’ve heard the whispering of one or two. As a matter of fact there was one planned a year ago and then it was put off. Something like that requires massive organization and the coming together of different black groups, it would have to start right now and have a date probably in the summer so that people could be able to get there. They could plan around it. There could be some real motion and it has to be something that goes beyond, and I’m going to say this… Goes beyond working class energy and you know and middle-class amiability. I’m trying to be nice by that because as you pointed out, there are other people who say those folks don’t want to vote. They dont register. And they’re usually pointing that finger at working class people and working-class people have a lot of responsibility. They’re not making the money they should be making. Everyone knows that the black dollar is a percentage of what the white dollar is. You know, there are all these pressures on all of us and yet we need to get to the working-class voters to say working class person we need your vote because they are the majority in our community.

(Part III of this interview with Professor Browne-Marshall will be presented next week.)
Professor Gloria J. Browne-Marshall is a Professor of Constitutional Law at John Jay College of Criminal Justice (CUNY). She teaches classes in Constitutional Law, Race and the Law, Evidence, and Gender and Justice. She taught in the Africana Studies Program at Vassar College prior to John Jay. As a civil rights attorney, she has litigated cases for Southern Poverty Law Center in Alabama, Community Legal Services in Philadelphia, and the NAACP Legal Defense Fund, Inc. She addresses audiences nationally and internationally. Gloria J. Browne Marshall-Marshall, a broadcaster for WBAI-FM, has spoken on issues of law and justice in Ghana, Rwanda, England, Canada, South Africa and before the United Nations in Geneva.

A prolific writer, she is the author of “The Voting Rights War: The NAACP and the Ongoing Struggle for Justice” and “Race, Law and American Society: 1607 to Present.” Her book “She Took Justice” will be out later this year.
David Mark Greaves, CEO, DBG Media, is the award-winning “View from Here” columnist and chief interviewer for the Brooklyn-based Our Time Press weekly, which he co-founded with his wife Bernice Elizabeth Green in 1996. Also, Vice President of William Greaves Productions, Mr. Greaves is an author and former filmmaker. He is a graduate of Syracuse University and received a Masters in Fine Arts from Columbia University.

(Note to readers: This Conversation was edited by Ms. Green from a transcription.)

“We Stepped Out on Faith”