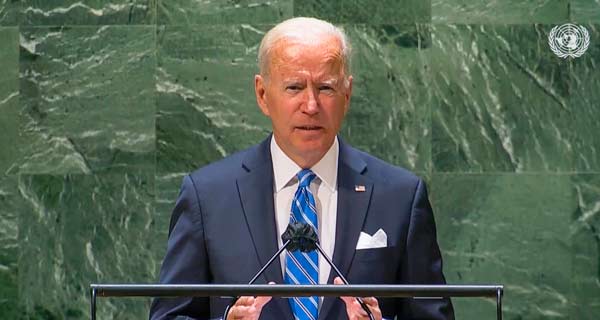 www.theguardian.com
Joe Biden has vowed to double the financial aid given to developing countries vulnerable to the worsening climate crisis as he warned the UN that the world is “fast approaching the point of no return” from global heating.
The US president told the UN general assembly on Tuesday that the US will become the world’s leading provider of climate finance to “help developing nations tackle the climate crisis”, with his announcement bringing the promised amount to more than $11bn.

Biden said he is confident wealthy countries will meet a collective pledge to provide $100bn to help poorer nations deal with mounting floods, heat and other impacts, despite a significant shortfall to date, but urged governments to do more to address the climate emergency.

“This year has brought widespread death and devastation from the borderless climate crisis,” Biden said. “We are fast approaching the point of no return in a literal sense. Will we meet the threat of the more challenging climate already ravaging every part of our world with extreme weather or will we suffer the merciless march of ever worsening droughts and floods, more intense fires and hurricanes, longer heatwaves and rising seas?”
In a speech that called for unity and multilateralism on a number of fronts, Biden said the US will look to lead on climate but that other countries need to bring their “highest possible ambitions” to cutting greenhouse gas emissions.

“We cannot afford to waste any more time. Let’s get to work, let’s make our better future now,” he said. “We can do this. It’s in our power and capacity.”
Biden’s speech was aimed at generating some sort of positive momentum amid growing frustration and anger at the world’s wealthiest countries’ floundering attempts to avert the disastrous climate crisis. Domestically, Biden faces a critical political moment, with Democrats in Congress struggling to muster the votes for a $3.5tn bill that contains sweeping measures to cut emissions.

“Climate vulnerable nations, particularly low- and middle-income countries, are already reeling from an unprecedented onslaught of climate-related disasters and desperately need financial support to adapt and build resilience to worsening impacts,” said Rachel Cleetus, lead economist at the Union of Concerned Scientists who welcomed Biden’s new pledge, which is dependent upon congressional approval.
“The United States’ credibility on the world stage also depends on securing domestic policies to help deliver sharp cuts in its heat-trapping emissions.”

Time is now running short. A report released by the UN last week showed that the countries are falling well short of meeting the goals of the Paris climate agreement with their plans to date, put together, set to raise overall planet-heating emissions 16% by 2030.

This is set to push the world towards 2.7C of global heating by the end of this century, scientists say, unleashing increasingly severe heatwaves, wildfires, floods and other climate-driven calamities. The report shows that the planet “is on a catastrophic pathway”, according to António Guterres, the UN secretary general.
Guterres delivered an opening speech on Tuesday to warn that countries are “seemingly light years away from reaching our targets” and that the world is “on the edge of an abyss and moving in the wrong direction”. In a fiery delivery that took aim at everything from tax evasion to “billionaires taking joyrides into space”, the UN secretary general noted how New York City itself was recently flooded by record rainfall. “We must get serious, and we must act fast,” he said.

Every G20 country is failing to cut emissions adequately to avoid disastrous climate breakdown, another recent analysis found, leading to rising anguish among poorer countries, environmental groups and Guterres, who has said that China and the US, the world’s two biggest carbon polluters, need to repair a “completely dysfunctional relationship” in order to salvage the dire situation.

It’s unclear whether China’s leadership will attend crucial UN climate talks in Scotland, known as Cop26, in November, with the country irked by the recent security arrangement announced by the US, UK and Australia. Boris Johnson, the British prime minister, has said that “history will judge” the countries that do not act properly to stave off the climate crisis.

“Cop26 will be staged in the full glare of the global spotlight,” Johnson said on Monday. “And when the summit ends, when most of the world has committed to decisive, game-changing action, it will be clear to all which of us has lacked the courage to step up.”

Smaller, less wealthy nations have used the UN gathering to voice simmering fury over a worsening climate emergency that threatens the future viability of some vulnerable countries. “For us it is inexplicable the world isn’t taking action and it suggests we in small islands are to remain dispensable and remain invisible,” said Mia Mottley, prime minister of Barbados.

Carlos Alvarado Quesada, president of Costa Rica, said that if countries were private businesses all of the leaders would have been fired for failing to keep on track. “Things remain the same,” he said. “It is absurd.”