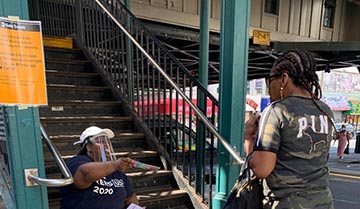 With the Potential of NYC losing billions for COVID-19 Relief and Govt Representation
Central Brooklyn’s Kathleen Daniel is a leader in the effort to up the Census count
New York City has more than a “lot” to lose, if it can’t hit the numbers. What’s at stake? Billions in federal aid for the critical programs we need, and two congressional seats in the midst of arguably the worst economic and health crises in a century.
With the 2020 Census count skewing low for myriad reasons, including COVID 19, it’s all hands — and feet — on deck. And the Mayor’s Office of Immigrant Affairs (MOIA) and NYC Census 2020 are leading the way.
Last week, the City launched the #GetCountedNYC Census Week of Action (July 27-August2) to mobilize all households to respond to the census in New York City, with events across the five boroughs.
Yesterday, the Mayor’s Office of Immigrant Affairs and NYC Census 2020 held an emergency public session with ethnic media in response to President Trump’s “cutting of the door-knocking period and the self-response period of the 2020 Census by one month”. Top city officials see it “as a move designed to depress responses and rob New York City of billions for critical programs, as well as congressional representation, for the next 10 years.” The census determines the equitable distribution of $1.5 trillion in federal funds annually for education, healthcare, housing, transportation, infrastructure, and more, in addition to determining the number of seats each state is allotted in the House of Representatives, as well as the shape and size of local and state legislative districts. This means door knocking by census takers would end on September 30, not October 31, despite the Census Bureau’s earlier commitment to continue door knocking through October 31, which was set in response to COVID-19.
The session was led by MOIA Commissioner Bitta Mostofi and NYC Census 2020 Deputy Director Amit Singh Bagga with NYC Census 2020 Field Director Kathleen Daniel, New York Immigration Coalition 2020 Census Senior Fellow Meeta Anand, and representatives from Make the Road New York and Chhaya CDC.
Ethnic media — considered the community-based messengers — engaged in conversations with City officials, coalition leaders, and community-based organizations about the latest developments involving the 2020 Census. And the latest developments, with the Trump announcement, certainly don’t look pretty.
Specifically, the session covered information about:

–the U.S. Census Bureau’s door-to-door enumeration operation, commonly known as “NRFU” (non-response follow-up).
–addressed misconceptions about the 2020 Census and New York City’s response to President Trump’s unconstitutional attempt to exclude undocumented immigrants from congressional apportionment;
–discussed NYC Census 2020’s priorities and what areas of the city are lagging, in terms of self-response;
–outlined the barriers to self-response participation and how their organizations are working to ensure that their constituents can get the money, power, and respect that is rightfully theirs by participating in the census.
— briefed the press on the major breaking news development: The Bureau’s door-knocking operation (whereby the Bureau sends staff to knock on doors of those that have not completed the Census) is now going to end on September 30 – a full month before it was slated to end.

What you should know:
· NYC has been outperforming itself compared to 2010, but our work is not done. Currently, NYC›s self-response rate is 54.8% and the national total is currently 63%.
· The census is easy, safe, confidential, and important, and New Yorkers should be familiar with census takers’ role in the census count.
· It is not too late to self-respond to the 2020 Census. While the Trump administration continues to attempt to interfere with the census, the best way to respond is to complete the census right now. There are no questions about citizenship or immigration on the census.
· COVID-19 is a stark reminder of the importance of the census, including federal funding for health care. Census data is used to measure the spread of diseases, order vaccines & plan for contact tracing. And the census determines the size of our political voice in Washington D.C., Albany, and local district lines.
NYC Census 2020 is a first-of-its-kind organizing initiative established by the Mayor in January 2019 to ensure a complete and accurate count of all New Yorkers in the 2020 Census. Of particular interest to Our Time Press is the Mayor’s in-house “Get Out the Count” field campaign supported by a volunteer organizing program to promote a complete count in each of the city’s 245 neighborhoods.
While a major engine in any modern-day campaign is the smart use of cutting-edge data and organizing technology, we are happy that the Mayor and City leaders understand the importance of direct contact. A great example of how that’s being done and who’s doing it here can be seen in the efforts of the city’s Kathleen Daniel, who has walked the “beat” in the neighborhood she calls home.
During Census Week, Ms. Daniel led teams of volunteers in the distribution of Census educational materials to her neighbors and commuters in the area where she lives.
Sponsored by the NYC Census 2020 and its partners, 150 volunteers held in-person census outreach events across the five boroughs in transit hubs, parks, playgrounds, small business corridors, and other key public areas in areas with historically low self-response rates. Teams were equipped with PPE. There was another “P”. For Passion.
Which is what Daniel brought with her at every stop along her special delivery of a message designed to save the life and livelihood of her community: Stand up! Be counted.
Daniel was raised and still lives in Central Brooklyn. Her — and her volunteers’ — efforts helped kick-off the ambitious #GetCountedNYC Census Week of Action.
“The campaign mobilized households to respond to the census in New York City, but there’s so much more to be done,” said Daniel said at a socially-distanced press gathering last week. “Without a complete count, New York will lose billions in Federal aid for schools, hospitals, and transit, as well as key Congressional representation.” (Sona Rai and Bernice Elizabeth Green)

Bringing it On: Taking Gun-Control Message to the Streets

Just a thought … A Topical Solution: Hand Sanitizer as an Industry