Nichelle Nichols: She listened to MLK,
Then Inspired Generations to Reach for the Stars
Advertisement 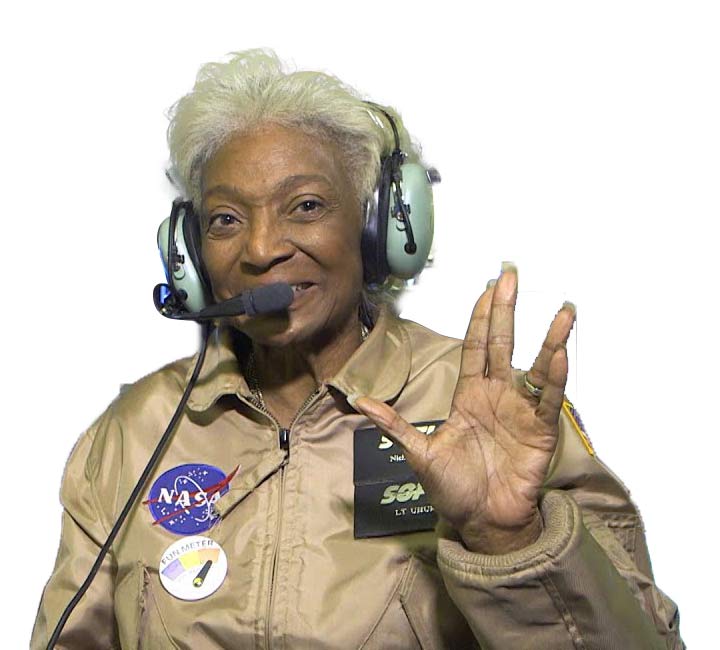 When the “Star Trek” series launched in 1966, it broke many barriers, and the most memorable one was the presence of a brown-skinned woman whose title was Lieutenant, not maid. Whose skin color was dark, not tawny. Whose manner was professional, not sultry. She held a position of authority – chief communications officer and fourth in command on a spaceship called the U.S. S. Enterprise. She even had an African surname Uhura, inspired by the Swahili word for freedom.

If the character broke barriers, the actress Nichelle Nichols who originally brought Uhura to life, smashed more.
Her appearance as a bridge officer in the series was a trailblazer for African American actresses on American television as the role was considered non-stereotypical and three-dimensional.
Multiculturalism and diversity were not a “thing” back then, but Ms. Nichols set the standard on stage and off.

Viewing audiences of all races fell in love with Lt. Uhura, and Ms. Nichols was given much praise for her portrayal, but she wanted to leave the series, and return to her singing and dancing – her first love. Prior to “Star Trek” she debuted as an actress, singer and dancer in an Oscar Brown musical, followed by a James Baldwin play, “Blues for Mr. Charlie.”
Nichols recalled in an interview with Essence magazine, the excerpts of which are printed below, that it was the Civil Rights leader Martin Luther King Jr. who changed her mind. She met him at an NAACP banquet, and he told her she “could not give up” on the series. She recounted the scene to the Essence reporter:
Essence.com: There was a moment you planned to leave the show, but a talk with Dr. Martin Luther King, Jr., changed your mind. What were his magic words?
Nichols: It was at an NAACP fund-raiser. One of the organizers came up to me and said, “Somebody wants to meet you. He’s a big fan of yours.” I turn around and I see Dr. King and my brain is going, THAT fan is going to have to wait! My God, that’s Dr. King! And he laughed and said, “I am that fan.” I had just told Gene Roddenberry that I was leaving the show and [Dr. King] said, “You can’t do that.” He told me how wonderful and important the show was and how it presented humankind in the future and gave a format for us to see how we’re supposed to be.
“He said I was part of history, and that television was the greatest form of education there is and for the first-time people are seeing us the way we should be seen—as equals, as powerful, as intelligent. I never even thought of it in those terms. He was so captivating. I stayed because of that.”
For the record, King also stated that his wife, Coretta, watched “Star Trek” on TV and it was the only television series that he approved of for their children. He also told her that her character was a positive role model for African Americans.

She withdrew her resignation from the series. And, later, something more outside of “Star Trek” and her role: she helped to break barriers for girls aspiring to work in space careers.
For more than 15 years, from the late 1970s until 1987, she was employed by NASA to oversee astronaut recruits at the Johnson Space Center in Houston, Texas. The space agency said in a tweet following her death last weekend, that Ms. Nichols helped recruit some of its first female and minority astronauts, among them Guy Bluford, the first Black American in space and Sally Ride, the first American woman in space.

Dr. Mae Jemison, the former NASA astronaut, says Ms. Nichols inspired her to become an astronaut. A big fan of “Star Trek,” Jemison was the first African American female astronaut.
The tweet read: “We celebrate the life of Nichelle Nichols, Star Trek actor, trailblazer, and role model, who symbolized to so many what was possible. She … inspired generations to reach for the stars.”

“Nichelle Nichols was a trailblazing actress, advocate and a dear friend to NASA” NASA Administrator Bill Nelson said in a statement. “At a time when Black women were seldom seen on screen, Nichelle’s portrayal as Nyota Uhura on “Star Trek” held a mirror up to America that strengthened civil rights.”

He added: “Nichelle’s advocacy transcended television and transformed NASA. After Apollo 11, Nichelle made it her mission to inspire women and people of color to join this agency, change the face of STEM and explore the cosmos. Nichelle’s mission is NASA’s mission. Today, as we work to send the first woman and first person of color to the Moon under Artemis, NASA is guided by the legacy of Nichelle Nichols.”

In 2016, Ms. Nichols was awarded the Lifetime Career Award at the 2016 Saturn Awards for science fiction entertainment, the musical arts, and her tireless support of NASA and space exploration.

Born in 1932 in Robins, Ill., Nichelle Nichols passed July 30, 2022 in Silver Spring, New Mexico.
Bernice Elizabeth Green, Co-Founder and Editor-in-Chief of Our Time Press, is an award-winning journalist and public relations executive. She was the first African American publicity executive at CBS Entertainment Network and CBS Network News, where she promoted over 125 television shows during her 25-year career at the network