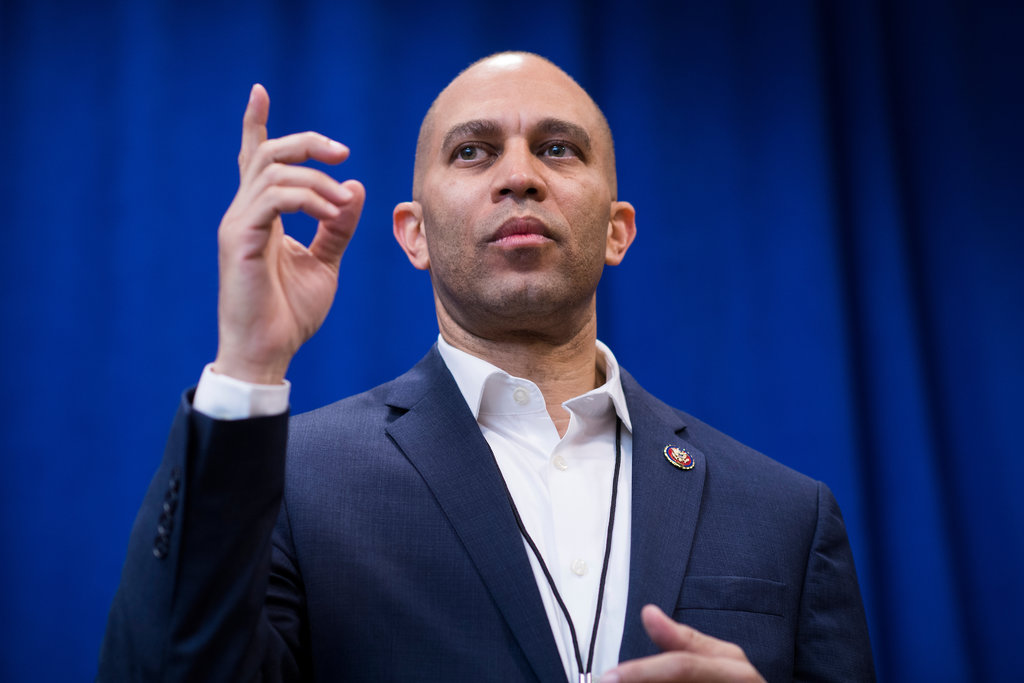 U.S. Reps. Hakeem Jeffries (D-Brooklyn, Queens), Adriano Espaillat (D-NY), Bonnie Watson Coleman (D-NJ), Brendan Boyle (D-PA) and Mary Gay Scanlon (D-PA), yesterday made their argument in a conference call on why the Republican-led U.S. Senate should pass the Democratic-led House’s $3 trillion HEROES Act – an emergency allocation to combat the national Coronavirus outbreak that has crippled the American economy.
Among the major bones of contention between the Dems and the GOP is that nearly a third of the money or $910 billion will go to funding state and local governments. This includes $500 billion to state governments, $375 billion to local governments, $20 billion to U.S. territories, and $20 billion to tribal governments.
Senate Majority Leader Mitch McConnell (R-KY) called this funding a “blue-state bailout” in that it could make states such as New York, New Jersey and Pennsylvania, which all have budget deficits, whole and thus reward them for poor fiscal management.
But Jeffries countered, noting the distinction between “donor” states who provide billions of dollars more to the federal government than it receives, and “taker” states, who receive more federal funding than they give.
New York, New Jersey, and Pennsylvania are among ‘donor’ states that would ordinarily give money to buttress other state economies. ‘Taker’ states, such as Kentucky, Alabama and Mississippi receive more than they send.
“We’re all Americans, and this is a moment for us to again come together, not as blue states or red states, not as donor states or taker states, but as Americans,” said Jeffries.
New York state paid $26.6 billion more in federal taxes in the fiscal year ending in 2018 than it received from the federal government, according to the New York State Comptroller’s office. Based on an estimate by the Congressional Research Service, the Heroes Act would provide New York state roughly $35 billion over two years with Kings County likely receiving nearly $1.5 billion.
According to predictions just released from the Independent Budget Office (IBO) and the Mayor’s Office of Management and Budget, virtually every industry in New York City will lose jobs, with employment not expected to recover to what it was before the outbreak until 2024.
This will result in a sharp decline in tax revenues, and even larger deficits within New York State, which already had a $6 billion deficit prior to COVID-19. Though the city is trying to save, freeze hiring, make cuts, and pull money out of reserves, IBO still estimates “a budget gap for the current fiscal year is $544 million, with an $830 million shortfall expected for 2021” in the executive budget.
The HEROES Act comes after the Federal Reserve implemented an initial $2.2 trillion lending program called the Coronavirus Aid, Relief and Economic Security (CARES) Act to help during the coronavirus outbreak back in April. Federal Reserve Chairman Jerome Powell, who is a Republican appointed by the Trump administration, also spoke about lowering the interest rates for borrowers and emergency lending measures to stabilize the financial market.
Included in the CARES Act was a one-time $1,200 payment to all to almost all Americans plus an extra $500 to families per child
Congress then approved additional support funds, which ended up totaling $484 billion altogether, for healthcare providers, coronavirus testing, state reserves, and to replenish small business grants after the complete debacle of inequality in the first rounds of the Paycheck Protection Program (PPP).