Fallen Firefighters Memorials,
one in Bed-Stuy, another in Albany
Advertisement 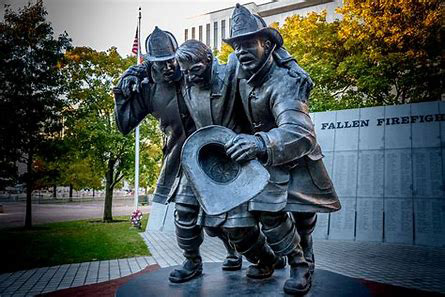 The upstate memorial recognizes the 2,631 individuals from across the state who died in service to their communities, and the day of appreciation was called during this Fire Prevention Week, now celebrating 100 years (October 9-15).

Speaking of 11 firefighters who died at the World Trade Center on September 11, 2001, Gov. Hochul said in the presence of their families, “We remember these New Yorkers as selfless individuals with unwavering dedication to keeping us safe.

Lt. Delgado added, “We are eternally indebted to the brave men and women who put their lives on the line every day to ensure our safety. There is no greater calling in life than service to your community – service to others. We grieve their loss, but also find inspiration in the love that drove them to service in the first place.”

Similar words were expressed by the late Mr. Herbert Tibbs, 19 years ago in Bedford-Stuyvesant on September 11, 2003, at a remembrance ceremony and memorial site-unveiling commemorating 12 Black firefighters. That event took place at the First Quincy Street Garden Mr. Tibbs founded two years prior (located between Tompkins & Throop). According to the www.firstquincygarden.nyc, Mr. Tibbs, a social worker, community activist and gardener, also said, “We proudly have one of the few memorials honoring the Black firefighters who perished on 9/11. It is absolutely and categorically (a) sacred space.”

The memorial, informs the website, was created in collaboration with the Brooklyn-based Vulcan Society, a fraternal organization for active and retired Black firefighters of the FDNY. The Quincy Street block and the Vulcans continue the tradition of annually honoring the 12 Black firefighters on or around September 11, for nearly two decades.

Related Topics:firefighterssept 11topstories
Up Next

He Raised the Bar, Set the Standard, Lit the Way