Timothy Marshall Speaks:
“Cancer doesn’t have a face until it affects someone you love!” 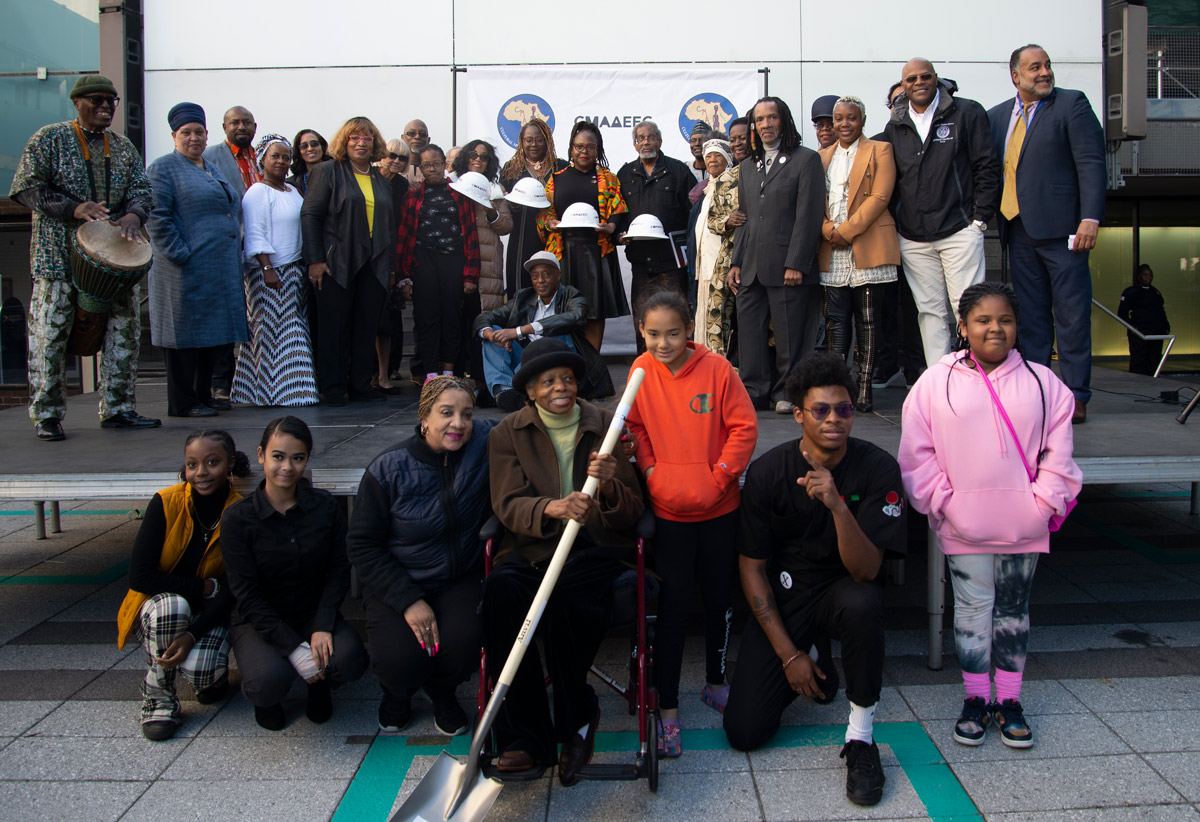 On Saturday, October 22, Restoration Plaza was the site of the groundbreaking for The Cultural Museum of African Art – The Eric Edwards Collection (CMAAEEC).
Some speakers extolled the importance of having Edwards’ world-class collection of 3,000 African artifacts housed and preserved in an African American institution in the middle of Bedford-Stuyvesant.

Others referenced the sheer magnitude of Edwards’ personal collection – as one of the largest of its kind in the nation, and it will be in a space designed by architect Rodney Leon.
The event, which commenced at 1:00 pm in Restoration’s Plaza area, was festive, like a family reunion.

Edwards’ supporters over the decades found each other. There was great drumming and the youth parade. And the photo documentation. It was lively.
However, solemnity also had its presence. Perhaps, due to a general understanding, Restoration was now an even more sacred space with Edwards’ monumental gift.
It was a pleasant two hours as the royals of Restoration’s history, Thomas Russell Jones, Elsie Richardson, Robert F. Kennedy, Shirley Chisholm, and Barack Obama, peered down from the gigantic Glass art mural on the second floor where The CMAAEEC will be housed.

Eric Edwards, the last to speak, thanked his sister and brother for being his anchors. He spoke of the history of the Brooklyn he loves so much, gesturing toward Marcy Avenue and mentioning his Nathaniel Macon Junior H.S. 258 home, where he was valedictorian following his sister Myrna. She held the role the year before. He mentioned his teachers by their names and thanked them. He saluted his artist brother, Milton as well.

It was an afternoon of thank yous and embraces for the nearly 350 people attending the event.
That day, Edwards spoke of history, young people, legacy, education, beauty, and family. To the north of him, one mile away on Kosciusko Street, more than 100 years ago, Arturo Schomburg built the collections that would form the core and heart of the later Schomburg Center for Research in Black Culture. One mile East of where Edwards stood in the Restoration Plaza at Marcy and Harriet Tubman Way is the Weeksville Heritage Center, an example of New York State’s first pre-Civil War black metropolis.

In attendance were Blondel Pinnock, President and CEO of Restoration, and Dr. Patricia Ramsey, president of Medgar Evers College. Both extolled the world-class experience in African Art that students in their neighborhood will enjoy, especially as it is across the street from P.S. 93 on the south and two blocks from the aforementioned JHS 258 on its north side.
Masterfully hosted by Restoration Community events director Marlon Rice, there was an emphasis on the cooperation between the state and non-profit sectors. The celebration brought out too many community luminaries to name, and trying would only invite disaster. Principals included Stefani Zinerman, Assemblymember; architect Rodney Leon; Hon. Dr. Annette Robinson, Dr. Leonard Jeffries, Danny Simmons, Ralph Carter, and so many more.
Citing the centrality of the location and the memories it holds, emcee Rice reminisced about how “old school” Brooklyn will remember how the soon-to-be transformed space had housed the Con Ed Payment Center. We later told him that real old-school Brooklyn remembers looking through the huge picture windows at the milk bottles moving on conveyor belts. And now it’s going to be an African Art Museum. We could never have imagined it, while in any of its previous lives. BG/DG