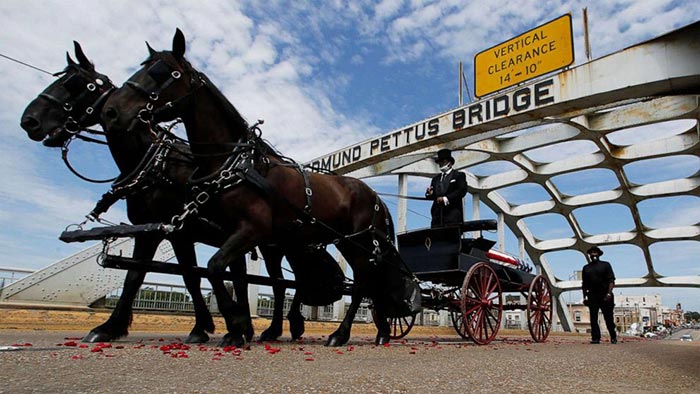 In Selma, Alabama, Sunday, July 26, 2020, the casket of John R. Lewis, an Alabama sharecropper’s son, national leader and Civil Rights icon, crossed the controversial Edmund Pettus Bridge pulled by a horse-drawn carriage over a carpet of delicate deep-red roses. It moved slowly near the site where, on March 7, 1965, the blood of Lewis, among some 600 other marchers, was splattered after a bludgeoning. That day, they had begun a 54-mile journey from Selma to the state Capitol of Montgomery. They were commemorating the death of Jimmie Lee Jackson, who had been shot the month before by a state trooper while trying to protect his mother during a civil rights demonstration. In addition to drawing attention to America’s systemic racism and unjust practices, Mr. Lewis, then 25, was building support for the passage of the Voting Rights Act. Every year since, for 55 years, Lewis has travelled back to the Bridge to journey with hundreds of others, unheeded, to the other side. Sunday was the last time. For him.

Whenever a great leader passes, our thoughts swing to those who walked in the decedent’s path, during the icon’s lifetime. Activation of the message of the beloved’s missions during his or her lifetime gives rich meaning to “walking in the footsteps.” So, for our readers, there was no need to search far and wide; deep into the archives; or away from the neighborhood to find someone worthy to speak to the honorable Mr. Lewis’ legacy. The Rev. W. Taharka Robinson, founder of the Brooklyn Anti-Violence Coalition, has actively fought to preserve the memory of all of our Civil Rights Era heroes. He and his wife, Bianca, and their Coalition have consistently rallied young and older, to remember young Brooklyn victims of violence, leading protest marches, for instance, on behalf of innocent, but silenced gunshot victims like one-year old Davell Gardner (in photo below). They coordinate field trips for teens, pre-teens and their guardians from this borough to Civil Rights landmarks in such places as Montgomery, Birmingham, Tuskegee, the highlight of which is Rev. Taharka’s scholarly lectures and meditative prayers on each side of the “Bridge to Selma,” a bridge to deep awareness and rediscovery … following in the footsteps of Mr. Lewis.

So, yesterday, we called Rev. Taharka requesting a plain and simple eulogy. He delivered these words: “Congressman John Lewis was the complete epitome of Leadership: He stood up, when others sat down. He got into good trouble — necessary trouble! — to redeem The Soul of America. Congressman John Lewis taught us to speak up when things were Not right, Not fair and Not Just. To the Distinguished Gentleman from Georgia, rest in peace and majesty.”

AG James Brings It On: Files lawsuit to dissolve New York-headquartered NRA for “Getting Away With Murder”