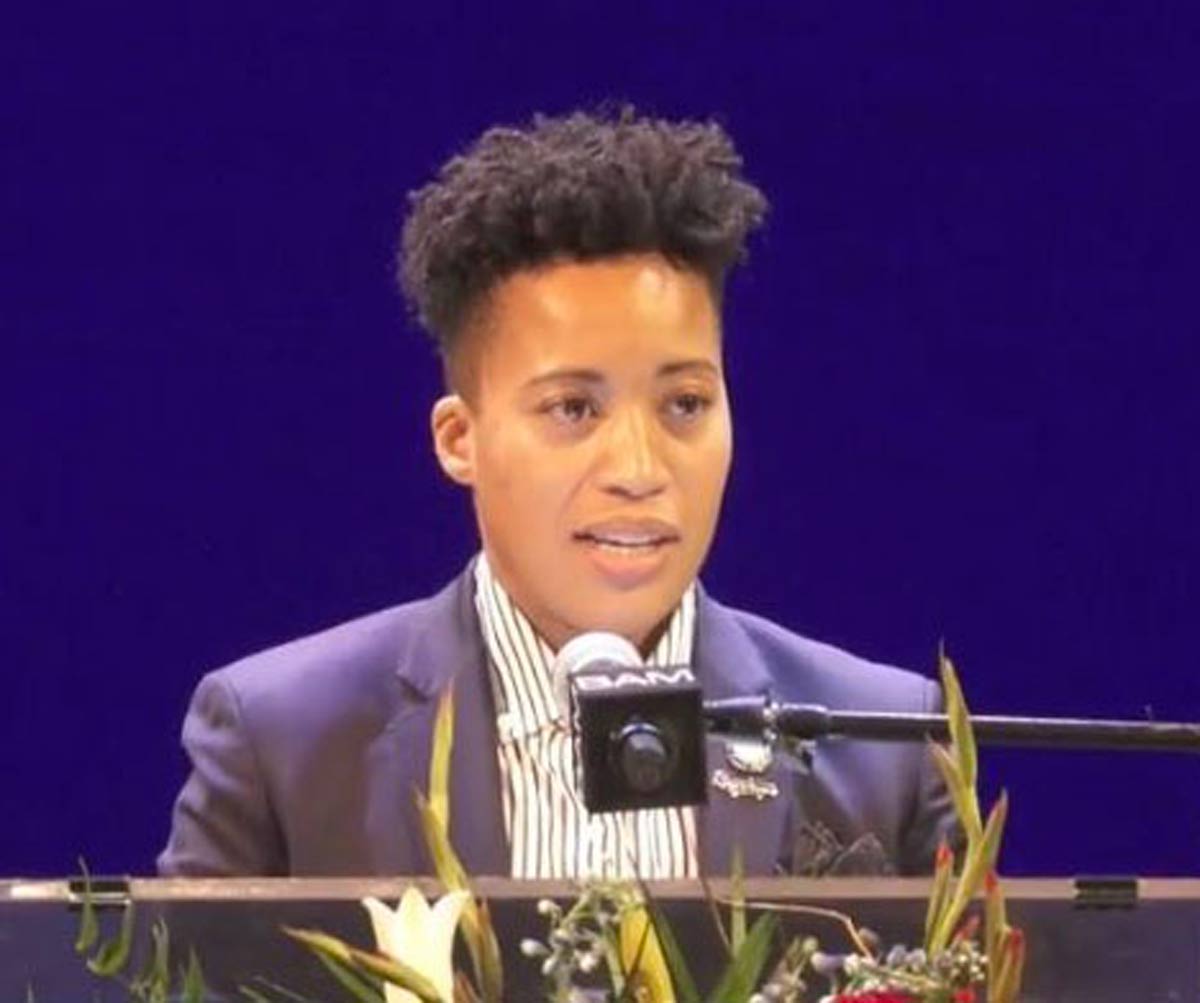 My name is Crystal Hudson, and I am your Council Member, proudly representing the neighborhoods of Crown Heights, Prospect Heights, Fort Greene, Clinton Hill, and Bed-Stuy, right here in the People’s Republic of Brooklyn.
Thank you to BAM’s esteemed president, Gina Duncan, and to the incredible staff, who work tirelessly to ensure that the Brooklyn Academy of Music remains a true gem in our City and a place where all are welcome. It is an honor to represent this district for so many reasons, and BAM is most certainly one of them.
Dr. King’s legacy is one marked by sustained struggle.
Of course, it’s also a legacy of great social progress and radical achievement.
But Dr. King comes to mind most when we’re in need of inspiration. When, in our fight for liberation, we’re dealt setbacks and face defeats. When our confidence and resolve cracks and the path toward equity and justice seems stacked with insurmountable obstacles.
That’s when Dr. King usually comes to mind. He professed that the future we deserve is within reach, but it is earned, and never given. And that’s what we search for in remembering and celebrating his life and legacy.

In 1956, Dr. King gave a sermon at the Cathedral of St. John the Divine in Morningside Heights to commemorate the second anniversary of the Supreme Court’s Decision in Brown v. Board of Education. In it, he spoke:
“Change does not roll in on the wheels of inevitability, but comes through continuous struggle.”
Sixty-seven years later, it wasn’t enfranchising millions of Americans and outlawing de jure segregation, but rather, the Supreme Court’s decision in Dobbs v. Jackson Women’s Health Organization did the opposite, stripping millions of Americans of their previously Constitutionally guaranteed right to abortion access.
Instead of setting us down a path toward a stronger, more inclusive nation, Dobbs jeopardized the precedents set by countless landmark rulings, clouding our path forward…Setting us back.
But as Dr. King said, “change does not roll in on the wheels of inevitability, but comes through continuous struggle.”
And in no place is the need for continuous struggle more clear than in the fight for reproductive justice––where the struggle for racial equality, gender equity, and economic liberation converge to underscore the plight of Black women, Black LGBTQIA+ folks, and poor and working class people across the country, in particular.
Why might I take a moment to focus on abortion access in the context of today’s celebration? In the context for our fight for democracy and voting rights? Because a mere six months ago, we saw the system rigged to go against the will of 80% of Americans and overturn access to abortion in the Dobbs case.

Today, 18 states have some version of an abortion ban in place. One-third of people of reproductive age seeking an abortion cannot get access in their state and are forced to travel for the care they need. This is where our alleged democratic institutions leave us.
Dobbs comes at a moment when Black mothers face a maternal mortality rate three times higher than that of their white counterparts nationally, and in this City, a rate twelve times higher.
At a moment when maternal health outcomes, across the board, are cratering.
When our for-profit medical system, mired in a long history of racism, leaves the poor and working class with an impossible choice: medicine or food. Life or debt.
Dobbs comes at a moment when the rights of LGBTQIA+ people are threatened daily and our livelihoods endangered by state legislatures bent on perpetuating cycles of discrimination and trauma, rather than offering solutions to improve the material conditions of LGBTQIA+ communities across the country.
At a moment when queer and trans people face the double whammy of threats to gender affirming care and abortion access.
Dobbs comes at a moment when wealth and income disparities have reached such a point that social mobility has become virtually impossible. At a moment when abortion access has become a privilege afforded to some, but not all.

At a moment when they banned abortion, but they are fine to open child welfare cases against us. They banned abortion, but they are okay if our kids go hungry. They banned abortion, but handcuff us when we can’t pay school lunch fees. Be clear — pro-life means pro-cages. For us.
But as Dr. King said, “change does not roll in on the wheels of inevitability, but comes through continuous struggle.”
The Dobbs decision left us with a choice. Take a dive into hopelessness or find strength in one another and continue our fight.
Paraphrasing one of the great abolitionists of our time, Mariame Kaba, we let this moment radicalize us rather than lead us to despair. We chose not to settle, because building something better was the only path we saw as truly viable.
And following the path of equity and justice really is our only option when abortion bans are bans on vital health care services. When they’re infringements on our personal freedoms. When they undermine our democratic ideals––the very ones for which Dr. King and our long line of predecessors gave their lives.
We look back, continuously learning from Dr. King and celebrating a life beaming with an earnest belief in our capability to do more for one another, and a firm confidence in our choice and responsibility to loosen the chains of injustice.
“Change does not roll in on the wheels of inevitability, but comes through continuous struggle.”
Happy Birthday Dr. King.
May we take from your legacy the courage to be bold, compassionate, and ever-disruptive in our continued struggle for freedom. Thank you.