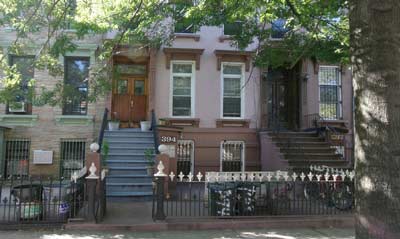 Brooklyn District Attorney Eric Gonzalez today announced that a suspended Brooklyn attorney has been arraigned on an indictment in which he is charged with stealing the deeds to eight properties in foreclosure worth a total of $7.8 million by defrauding seven homeowners, most of whom believed he was negotiating a short sale on their behalf.

District Attorney Gonzalez said, “Brooklyn’s valuable real estate market continues to be an attractive target for fraudsters willing to deceive homeowners. These victims, who trusted the defendant to help them avoid foreclosure, instead allegedly had their homes stolen by him and were left facing financial ruin. I urge anyone considering selling their property to be prudent about with whom they do business. Be wary of any unsolicited offers of help with your property and do not sign any documents unless you consult with an independently retained attorney.”

The District Attorney identified the defendant as Sanford Solny, 63, of Midwood, Brooklyn. He was arraigned today before Brooklyn Supreme Court Justice Danny Chun on a 63-count indictment in which he is charged with second- and fourth-degree grand larceny, first-degree scheme to defraud, and first- and second-degree criminal possession of stolen property. He was released without bail and ordered to return to court on February 4, 2021.

The District Attorney said that, according to the investigation, between May 2012 and November 2020, the defendant, an attorney whose license to practice law was suspended in April 2012, allegedly engaged in a real estate fraud scheme to steal deeds to and economically benefit from eight residential properties in Brooklyn, targeting seven victims who owned properties that were in foreclosure.

It is alleged that various individuals, including unlicensed brokers, contacted the victims and referred them to the defendant to negotiate a short sale, i.e., selling the property to someone else under terms communicated to and approved by a lender. In exchange, the lender would then drop the foreclosure action and forgive the loan amount owed.
The defendant allegedly met most of the victims at his office in Borough Park where he either falsely told them that they were required to sign their deeds over to him for the defendant to begin a short sale negotiation on their behalf or had the victims sign documents that the defendant claimed were part of the short sale process but, unbeknownst to them, actually relinquished ownership of their property to the defendant.

The indictment charges the defendant with crimes involving the following one and two- family homes with a total current value of approximately $7.8 million:

Over the months and years that the defendant claimed to be in negotiations, when victims asked him about the negotiations, possible sales or when the foreclosure actions would end, he allegedly offered an array of excuses and explanations.

The defendant allegedly collected over $600,000 in rent from tenants he brought in or existing tenants at the eight properties the victims transferred to him. As record owner, if any of the properties were to be sold, the defendant would also benefit from the increase in value accrued over the last several years.
As a result of the defendant’s alleged fraudulent scheme, the victims lost their properties and rental income. In addition, their credit scores and ability to obtain new loans rapidly deteriorated as most of the foreclosures remain active.