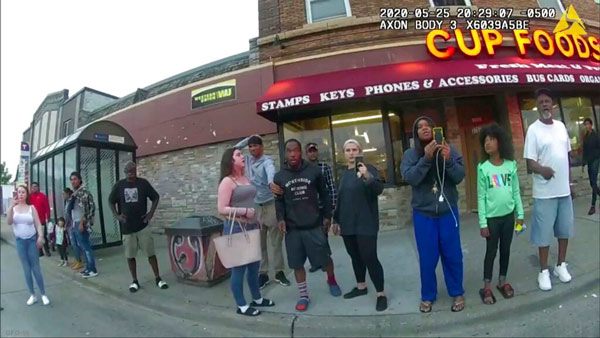 By the Associated Press
To the prosecution, the witnesses who watched George Floyd’s body go still were regular people — a firefighter, a mixed martial arts fighter, a high school student and her 9-year-old cousin in a T-shirt emblazoned with the word “Love” — going about their daily lives when they happened upon the ghastly scene of an officer kneeling on a man’s neck.

“Normal folks, the bystanders,” prosecutor Jerry Blackwell called them in his opening statement. “You’re going to see these bystanders, a veritable bouquet of humanity.”
But some of the same people are being portrayed as unruly, angry, even threatening by Eric Nelson, the attorney for Derek Chauvin, the former Minneapolis officer charged with murder and manslaughter in Floyd’s death. Nelson has told the jury about the hostility the officers faced, how they were distracted and perhaps frightened by people at the scene — repeatedly describing the bystanders as a “crowd,” and calling the neighborhood a “high crime area.”
“As the crowd grew in size, seemingly so too did their anger,” Nelson said in his opening statement on Monday. “And remember, there’s more to the scene than just what the officers see in front of them. There are people behind them, there are people across the street, there are cars stopping, people yelling. There is a growing crowd and what officers perceive to be a threat.”

Dr. Beverly Wright, Environmental Justice activist and scholar, appointed as an advisor to The White House