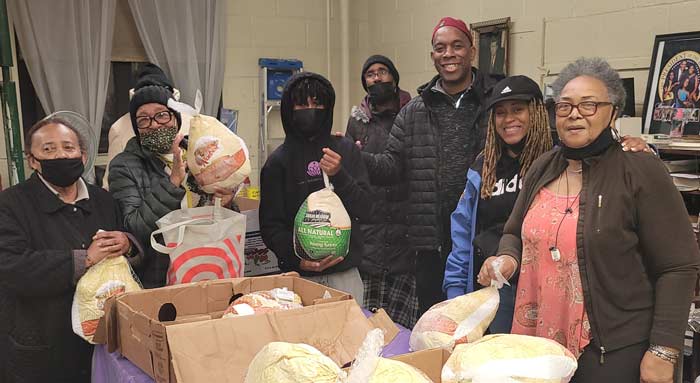 Last week, outspoken residents of the Eleanor Roosevelt Senior Citizens houses on Lewis Avenue took to the media to help cast light on a hard, cold story: they were freezing.
After numerous complaints, one resident sent a group shot of seniors in coats, captioned What’s Wrong with this Picture, to WPIX-TV’s Monica Morales. It caught her attention. The photo underscored the heat situation or lack-of-heat situation. She brought a crew to Dekalb and Lewis to capture the story. And found more than a Thanksgiving story.

There was no prompting the seniors to speak out, they were loud and clear: “We want heat! We want heat!” Seniors invited to the community room for free Thanksgiving turkeys, Morales learned, arrived in coats. There was no comfort zone.
Mr. Angel Hernandez, 76, a former building resident manager, invited the WPIX to his apartment so viewers could get a peek inside his world. “It’s colder on the inside the building than outside,” he says during the report which aired later that evening, showing how he’s dressed when he goes to bed: fully clothed including his winter outer wear – a heavy jacket, topped by a heavy comforter.

Although the image impacted viewers, the PIX broadcast noted that pipes were warming to the tough before the Morales and the crew wrapped and departed the scene.
On Friday, the day after Thanksgiving, Our Time Press visited the building to see how residents were doing, and how they spent the holiday. We met Mr. Hernandez in his lobby. He informed us the warmth lasted Tuesday and Wednesday. All who received the turkeys donations were able to cook their meals, including Mr. Hernandez whose daughter and grandson came by. But comfortable dining was a different matter. Hernandez said to us, “The heat was down, and it’s still down. Feel the pipe.”

Longtime resident, Mrs. Dorothy confirmed, adding, “You would think they could get this right, after all these years.”
Also on Friday, Morales and her PIX-11 crew returned for a second time to find out how everyone was doing. Their story ran that evening at 6. News 12 also covered and broadcast their story, as well.
Throughout Roosevelt development, temperatures are rising. The kind of uprising that has to do with being fed up, speaking out and demanding answers and action.

As media offers an ear to the voices who speak from the ground, other stories are emerging, like the current effort, it appears, to reconstruct spaces previously intended for the community – a day care center, a storage space, a parking lot –into chic, asbestos and lead-free NYCHA satellite offices. Or the time when one building’s residents had to rely on a spigot placed on the side of their building for water.

A new take on water, water everywhere but not a drop to drink or bathe in? Fodder for media? Technology advances have transformed the nation into reporters. But Angel told us he’s happy to stay in his lane, and glad “the news reporters are covering the community. Makes a difference.”