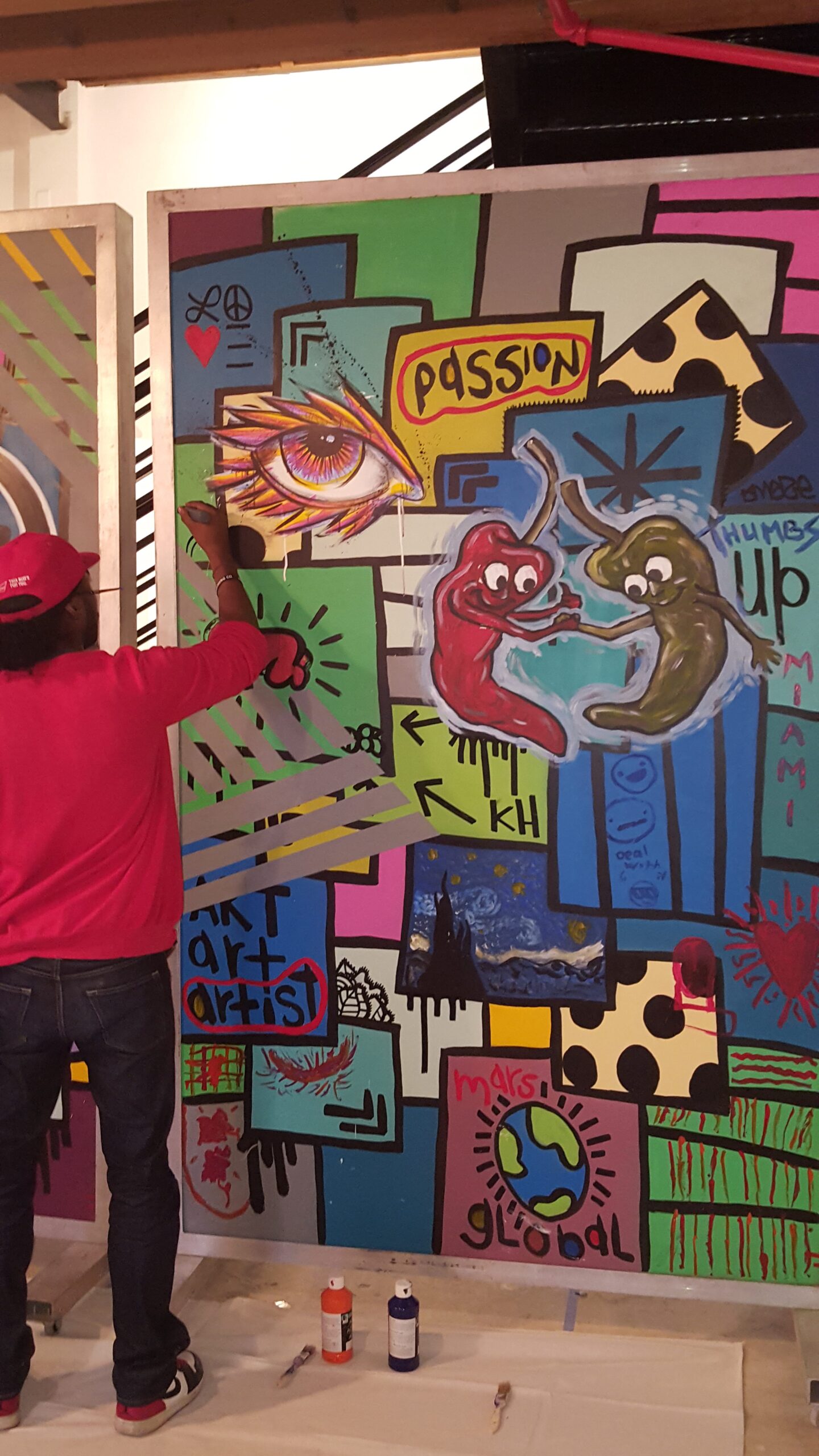 Special for Our Time Press:

The central jewel in the crown of Miami Arts Week, Art Basel attracts celebrities, high-end collectors and fashionistas from all over the globe. But it is not the only game in town. Across the bay in Wynwood, known as Miami’s Arts District, there were several art fairs showcasing new, provocative and courageous works by emerging artists.

Wynwood is Williamsburg on steroids. With palm trees, no less. From the massive Art Miami Fair (www.artmiamifair.com) tent to the industrial blocks honeycombed with contemporary design stores, coffee shops, artists’ workshops and galleries, you will see, hear and feel creativity in the air. (If you feel like taking a break, you can shoot real machine-gun rounds at Lock ‘n’ Load. This is, after all, a red state.)

Alexi Torres (www.alexitorres.com) uses a basket weave technique to paint massive portraits of people from the small town of Bermeja, Cuba from which he emigrated 13 years ago. In this elegant black-and-white two-minute video, he talks about the passion and pain of people’s everyday lives (https://www.youtube.com/watch?v=Xu9_LrKWLBs&app=desktop). “The subsistence lifestyle and controlled information in my country under a Communist regime left little time or energy for spiritual or philosophical reflection,” he says. “Over the last 13 years, I have enjoyed the benefits and freedom of living in a democracy which has allowed me to explore the theme of interconnectedness in all creation.”

“When you are in Cuba you are into ‘What am I going to eat today?’ Your life is so diminished by survival,” he says. “Most of the population in my hometown is made up of farmers who plant and harvest their crops on the waning moon. To be in harmony with my people and our ancestors, I begin and complete each painting according to the same lunar pattern.” Sun Light is the title of Torres’ collection and his book of Bermeja portraits.

It was especially meaningful for him to see his work on exhibit so soon after Fidel Castro’s death. “African-Americans have the wrong idea about Cuba, about Castro,” he says. “They thought Castro was pro-Black but it is still a racist society.” Torres observes that because Fidel Castro stayed in Harlem when he visited the United Nations in 1960, it created a myth that the Cuban leader was pro-civil rights. But, he says, nothing could be farther from the truth. “Black people do not have the same freedom. There is economic discrimination. They have little access to the Internet because it is very expensive.”

At the Fridge Art Fair (www.fridgeartfair.com) Cheryl Edwards’ compelling portrait, “Black Art Matters”, portrays an African-American woman with a target on her forehead. Her work also includes a painting of an American flag riddled with the exact types of bullets used by police to kill young Black men. (www.cheryl-

edwards.artistwebsites.com) The Washington, DC-based artist says, “A man wanted to buy it because he could identify all the bullet holes but when I saw him wearing a TRUMP shirt, I refused to sell it to him”.

The Conception Art Fair (www.conceptionarts.com) serves underrepresented artists of color as well as LGBT and women artists. The first and only woman founder of a national arts show, Liverpool native Rachel Wilkins, hosts Conception fairs and “Pop-Up” events in nine cities. Alloyius McIlwaine is a street artist who has used acrylic and spray paint to create some 45 murals in 13 states and four countries: France, Mexico, Spain and Costa Rica. The day after the election he painted “Tree of Life” to offer inspiration. His single mother portrait honors single mothers around the world. (www.AlloyiusMcIlwaineart.com)

The bus that Donald Trump used while campaigning in Iowa was parked next door. Artists Mary Mihelic of New York and David Gleeson of Philadelphia bought it for $14,000 after Rachel Maddow announced it was on sale. Before the Donald, it was used for bachelor parties and the artists have worked satirical magic with the stripper pole inside. One side has been altered to read “TRUMP: MAKE FRUIT PUNCH GREAT AGAIN”. The other side has a hand-painted ad for Jeb’s Low-Energy drink.   On the back, a bumper sticker that says “SAVE WATER. WATERBOARD on Mondays/Wednesdays/Fridays”.

“Single Mother” by A. McIlwaine

After asking herself what Betsy Ross would think of the President-elect, Ms. Mihelic embroidered the candidate’s famous “Grab ‘em by the pussy” quotes in gold thread onto the white stripes of an American flag. “We were supposed to exhibit the bus at the Red Dot Art Fair, next to Art Basel, but after Trump won, we received an e-mail saying, ‘Due to the surprising election results’, the bus was no longer welcome,” she says. “That really scared us about freedom of speech. If people are afraid of protest art, freedom of expression is truly in danger.”

Street artist A. McIlwaine at work

Related Topics:Art Basel MiamiMiami
Up Next