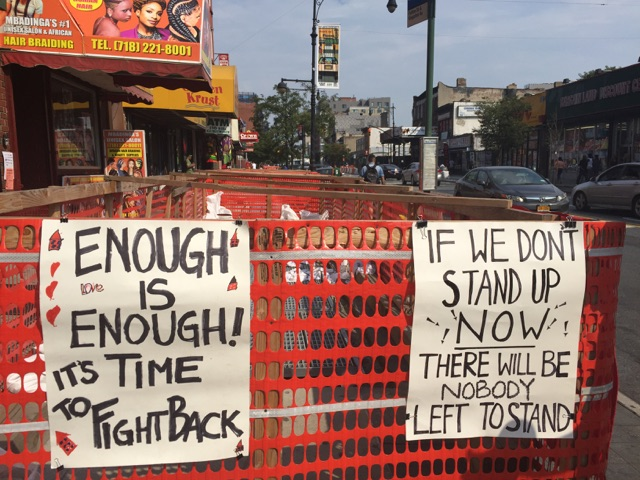 Perhaps longtime residents of Bedford-Stuyvesant can identify with Native Americans. Just as the indigenous people of this land were pushed westward across rivers and mountains to make space for the expanding United States territory, “Bed-Stuy homies” are being displaced from their homes. The hardest hit are those that rent.

Take Linda Owens, who lives at 1509 Fulton Street with her young daughter. Owens experiences upheaval in her living conditions since her building was bought by Green Brick, LLC from Mr. Beaty in May 2016.

“My lease with Mr. Beaty expired in April or May 2016. Green Brick, LLC never offered me a new lease. Green Brick, LLC accepted the Section 8 and HRA shelter allowance, but for a few months they stopped accepting my personal payments.” explained Owens.

This was due to the LLC taking legal action to evict her. She received a letter of eviction in the category of holdover. This meant the new owner did not want her as a tenant. Without a lease, Owens had little to stand on. This fact was hard for her to understand and hard to accept. Owens talked by telephone with Brooklyn Legal Services’ Jim McCormick about her upcoming case. After conferring with his supervisor, McCormick called her to tell her his supervisor saw no way to help her.

“I made it known that I didn’t want to move,” affirms Owens. Even when she appeared in Housing Court on August 19, 2016 before Judge John H. Stanley who ruled final judgment for the petitioner Ms. Owens said, “I don’t want to move”! She was made to sign the court stipulation whereby she had to vacate the premises by December 31, 2016. In her incredulous state, she heard Judge Stanley advise her “to look for housing in another state”. Further, Section 8 advised Ms. Owens to “leave 1509 Fulton Street and find another residence”.

While Ms. Owens’ world was coming apart, Green Brick, LLC committed to extensive renovations to the building. 1509 Fulton Street is a four-story building located between Tompkins and Throop Avenues. The ground floor holds the Mbadinga’s Unisex Salon & Hair; the second floor was changed from a three-bedroom apartment to two apartments by the new landowner; the third has one apartment where Linda Owens and her daughter reside; and the fourth floor has one apartment.

“Green Brick, LLC started construction soon after they purchased it. The work can go on through the night. The place got so dusty and made my daughter sick. I called the Health Department about the dust. My daughter was tested for lead. She had some lead but not a high level—I caught it in time.” What Ms. Owens is involved in is the process of selling a building at the end of the lease period; the new landlord buys with no intention of keeping the low-income tenants and renovations are made to rent to higher-income households. Working through the night is done to complete renovations sooner.