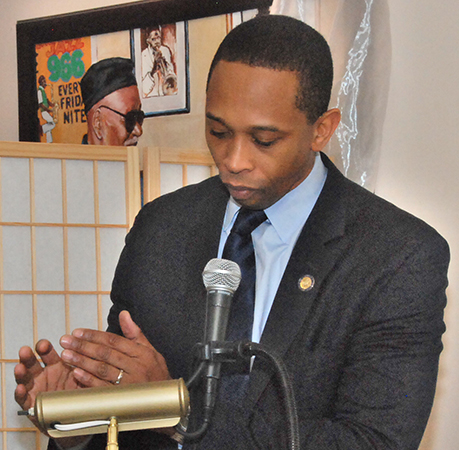 As the shock of Donald Trump being elected president of the United States wore off today, several Democratic Brooklyn and citywide elected officials weighed in on the president-elect.  Of note, Clinton trounced Trump in the heavily Democratic Brooklyn, 595,086 to 133,653.

“Obviously we’re disappointed with the outcome of the election, but also understand people living in our community and neighborhoods on how their lives are playing out. As elected officials, we have to recalibrate how to govern in our office and find a way to work with the Republican-controlled legislative and executive branch at the federal level,” said Assemblyman Walter Mosley (For Greene, Clinton Hill, Prospect Heights, Crown Heights).

Mosley said as Democrats on the state level it is also incumbent to work with colleagues across the aisle and fellow Democrats to continue to deal with issues such as systemic poverty, mass incarceration and income equality.

“There are issues and matters that need to be overcome regardless of who sits at the table or across from the table. These issues transcend party politics,” he said.

Mosley said from a political perspective, the Trump campaign showed the power of the media and particularly social media has to be given equal consideration when we deal with the issues of identifying voters, and getting them active and participating in the electoral process.

“The presidential election process lasted nearly a year and a half and there is little time to sulk. We have to get over the election and use time wisely in an effort to advance politically and governmentally,” Mosley said, adding the county will not fall because of the election of Trump.

“There have been presidential elections where people were enslaved and when we were at war, and at civil war when we were killing each other. We’ve lived in far more desperate times than this. Our resilience should be highlighted and relied on during this time. As difficult as it seems, we’ve overcome far more than this and that’s what makes this country special,” he added.

Central Brooklyn State Senator Jesse Hamilton said, “Not to deny the fear, anxiety, and grief that tens of millions of our neighbors feel this morning – but despair is not the answer, because our Muslim, our LGBTQ, our Latino, and our African-American brothers, our fellow Americans need our support.”

Hamilton said Democrats must begin to organize and rebuild, “Because democracy is about what happens on Election Day and every day in between. Because we still need the spirit of the Civil Rights Movement in our politics. Because social justice needs champions. Because our ideals of human rights for women, people of color, the disenfranchised, and the downtrodden still matter. Because these ideals matter all that much more under a presidency that poses profound challenges to the direction we envision for our country.”

City Comptroller Scott Stringer said, “The voters have spoken, and we have a new President-elect. As Hillary Clinton said this morning, what makes America special is that we treat the transfer of power from one President to another, regardless of party, as sacred. I agree.

“But make no mistake: this new administration, with a Republican-controlled Congress, will present major challenges. From a common-sense approach to immigration, to women’s health, to smart gun laws, to fair wages, and everything in between, we’re going to face obstacles on the issues that matter most to us as a City.

“New York City must continue to be a bulwark against hate and a model for all that America still can be. In our great City, we are guided by fairness for every family – we do what’s right when we see wrong. We know that diversity doesn’t divide us – it makes us stronger. The President may change from one election to the next, but our values do not. It’s more important than ever to remember that at this moment.”

Public Advocate Letitia James said yesterday Americans across the country exercised their fundamental right to vote, the results are in, and the country elected the next President.

This decision has come at the end of a long, bitter, and challenging political season. We must now come together and begin to heal as a nation, together as the United States of America.

“I know that many Americans — women, Muslims, members of the LGBT community, Hispanics, immigrants, and people of color — are scared and shaken after a divisive campaign. We must remember that we all have a place in America, and we must continue to engage for the sake of our families, our communities, and our nation.

“We must not give up or give in, we must move forward and we must work together to ensure that promise of a better tomorrow is achievable to every woman, man, person, and child from every corner of America.”