Tumble in the Bronx

The New York Yankees have started out the second half in an inauspicious way. The team lost the first of three games to the cross-river rival New York Mets, escaped a victory in the second game. The third game was rained out and the team headed to Florida to battle division rival Tampa Bay Rays, […]readmore

The first half of the Major League Baseball season is in the books for our beloved Yankees and Mets and it appears both teams (at the moment) are going in different directions. With baseball’s trade deadline looming, it is expected that both teams will be active in improving their ball clubs in hopes for a […]readmore

Tonight, the lives of many college/international basketball players will change forever as they will get to walk across the Barclays Center stage to hear their name called by NBA Commissioner Adam Silver. Tonight’s NBA Draft can very well determine who will change a team’s franchise for the next 10 years. This year’s draft class is […]readmore

The Draft Lottery is complete, the order is set and that means it is time for everyone’s mock draft to become a reality. The NBA Draft is just a little over three weeks away and for our beloved Brooklyn Nets. The Nets are coming off yet another disappointing season in which they missed the playoffs. […]readmore

One of the best movies I enjoyed as a kid was the “Rocky” saga movies that goes back to the very first one back in 1976. We all know how better and better the movies got throughout the years. This year in the NBA Finals we will be treated to a Rocky-like saga with the […]readmore

I’m not a fan of using the cliché quote of “I told you so.” But Our Time Press universe, I told you so. It has been quite the turnaround in the Bronx as the New York Yankees have flexed their muscles towards the last few weeks of April and into May thus far. Through the […]readmore 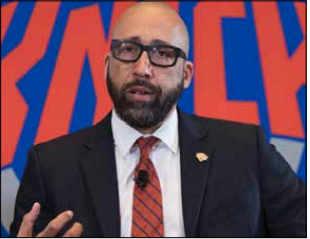 We are now just about 2 rounds complete in the NBA Playoffs, an intense platform where next month we will crown an NBA Champion. Unfortunately, for the New York Knicks, they have not made a playoff appearance since the 2012-13 campaign. Since then, they have had two other head coaches who were unable to get […]readmore

The NFL Draft has come and pass and as far as our professional sports teams, we now know that the New York Giants have selected Penn State running back Saquon Barkley with their No. 2 overall pick. The Jets then selected USC quarterback Sam Darnold with the No. 3 pick. The City of New York […]readmore