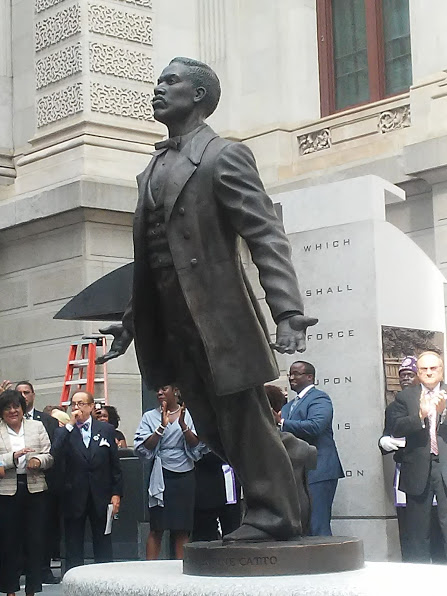 The memorial sculpture — the first statue in the city’s collection dedicated to a sole African-American — is erected on the southwest apron of City Hall.

In addition to erecting the memorial monument to Octavius V. Catto, the long-range goal of the Octavius V. Catto Memorial Fund is to educate the public about Catto’s life and accomplishments, as well as highlight the contributions of other African-Americans throughout Philadelphia’s history by creating educational programs aiming at broadening the public’s understanding and awareness of African-American history.

Born in 1839, Octavius Valentine Catto was a major in the Union Army during the Civil War, as well as a scholar, educator, athlete and member of the Union League, The Library Company of Philadelphia and The Franklin Institute. He was a prominent civil rights leader who fought for the right to vote for all men regardless of ethnicity [women were not allowed to vote at this time] and successfully led efforts to integrate street cars in Philadelphia in 1867. He was gunned down on Election Day — October 10, 1871 — at the age of 32 while on his way to the polls to serve in his official capacity as a National Guardsman assigned to protect newly registered African-American voters.

The memorial sculpture to Octavius V. Catto is a groundbreaking art installation in that it is the first statue of an African-American on public land in the city of Philadelphia.

We Came Before Columbus